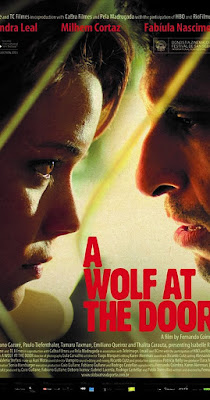 Brazilian writer/director Fernando Coimbra’s feature-film debut “A Wolf at the Door” (2013) opens on a scorching day, where Brazil’s iconic ‘Christ the Redeemer’ statue hovers like a mirage. Then, we see a shot of rattling trains running through the seamy city surroundings. These two opening shots establish that the film isn’t going to depict any alluring visions about Brazil. The blistering heat refers to the conflicts between the characters we are yet to familiarize with, which are going to reach a boiling point. The opening montage sequences ends up with a shot of a public telephone that’s shown as if it would ring anytime. This final shot is vital to the movie’s alleged thriller framework because we learn after few minutes into the movie that a child is kidnapped, although there are no ransom calls from a payphone demanding money.

“A Wolf at the Door” is a trenchant examination of adultery – its initial allure and the dangerous consequences. At its outset, the plot might seem akin to “Fatal Attraction” (1987). It even starts off like a Hollywood police procedural, but this Brazilian movie veers more into Michael Haneke territory or into the dominion of a Greek Tragedy than an American commercial flick. Sylvia (Fabiula Nascimento), the housewife after going through her routine works goes to pick her little daughter from the neighborhood kindergarten. The teacher/owner greets her and says you have just missed her. When Sylvia furiously asks how she could let out the child before her arrival, the teacher claims that Sylvia herself called her to say that a neighbor named ‘Sheila’ would come to collect the girl. Sylvia, of course, never called the teacher. She goes to the police stating that it must be some kind of mistake because they are just a middle-class family with little money. 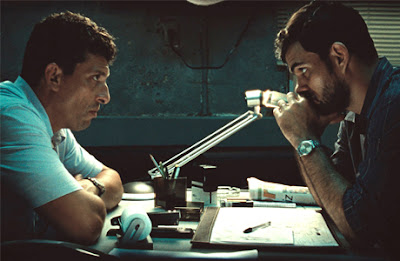 The teacher asserts that the child knew the alleged neighbor because she saw the child running gleefully to ‘Sheila’. Sylvia’s husband Bernardo (Milhelm Cortaz), who works at a bus depot, is called for and he immediately places his suspicion on a woman named Rosa (Leandra Leal). Bernardo has had an affair with the 25 year old Rosa and he also says to the police that Rosa has demanded to meet him that day at 7 pm in the train station. When Rosa doesn’t show up at the station, the police go to her home and bring in investigation. Initially, she denies any involvement, but after the teacher’s positive identification, Rosa accepts that she picked up the child, but only due to the threatening commands of ‘Betty’. Rosa tells the police that Betty is the girlfriend of Sylvia’s secret lover and that she has given the child to Betty. 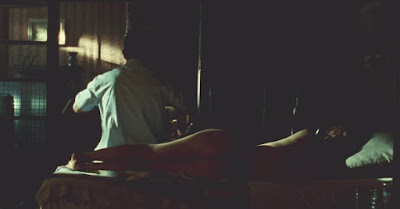 The dangerous possessiveness, bickering and haunting suspicions are the typical elements that hovers around infidelity drama. But, these elements have become time worn because it was used by countless soap operas and crummy novels. Nevertheless, if “Wolf at the Door” keeps us hooked till the end, it is because of director Coimbra’s unconventional sense of composition and due to the brilliant performances. The director is more interested in surveying the surroundings than simply move the narrative forward in a ceremonious manner. When Rosa visits Sylvia at her home, the shot is placed at a point so that we could observe the environment rather than the mundane conversation. Rosa’s impoverished home life and constricted relationship with her parents is depicted as subtly as possible and showcased the reason for her to cling to the naive romantic ideas. The camera for the most part remains motionless and these shots provide a lacerating effect, whenever a literal or psychological beating ensues. 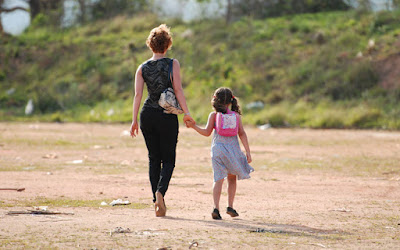 Apart from the ending sequences, the most agitating confrontation in the film happens when Bernardo beats  Rosa for meeting up with his wife. Just when we think that he is going to kiss Rosa, Bernardo gets rough and compels her to repeat the words: "I want you to fuck me for the rest of my life”. When she obliges with his command, he simply says: “Well, too bad” and leaves the room. The sequence is very much similar to emotional rape perpetrated by Willem Dafoe character in David Lynch’s “Wild at Heart”, but here we see Bernardo return to the room and reconciling with Rosa. This scene probably exhibits the explosive symbiotic relationship, for which the final stop could only be hell. Those who have expected a thematically & narrative-wise twisty thriller in the vein of “Prisoners” might be severely disappointed. Coimbra uses the word ‘thriller’ to lure us for presenting the inner turmoil of an unloved woman, who wants to override the social sanctions.

Eventually, this film could also be seen as a different version of ‘Three Little Pigs and the Big Bad Wolf’ folktale. Although, a wolf is a metaphor to indicate a family unit threatened by an outside force, the identity of the wolf in the film is a bit elusive. Rosa’s devastating final act makes her the titular wolf, but it is hard to forget the tactics of cruel Bernardo. It is also ironic how the family, especially Sylvia, has welcomed the wolf with open arms. Leandra Leal gives a sympathetic and enervating performance as Rosa. She vividly exhibits her characters’ sexual passion, romantic aspirations and outbursts. There’s not a single contrived reaction in Leal’s angst-filled portrayal of Rosa. Milhelm Cortaz gives a raw performance as Bernardo, unlike the Hollywood movie adulterers.


“A Wolf at the Door” (101 minutes) may not possess big twists for thriller aficionados, but those who have no qualms over looking through darkest inlets of human nature might be in for a intense movie experience. It is a punch-to-the-gut psychological study of a fragile woman.

as usual,brilliantly written. tempted to watch this.
Will get back to you once I watch this.
Regards!