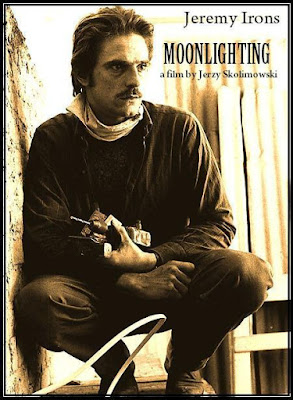 Polish writer/director Jerzy Skolimowski was seen as one of the most distinctly qualified film-maker of the Polish New Wave (during the sixties). He was also a gifted painter, poet and art designer. Skolimowski channeled his gifts into making visually poetic as well as incendiary movies that tries to depict the ungratified situation felt by post-war Polish citizens. However, he chose to leave Poland by late 1960’s due to the harsh censorship laws. Skolimowski made his first British film in 1978, “The Shout”, an unsettling psychological drama, which won the Cannes Grand Jury Prize. By the early 1980’s, a Martial Law was suddenly imposed in Poland (by the communist regime) in order to root out the Polish ‘Solidarity Movement’ (the movement was against the tyrannical ideals of the Communist regime and almost 10 million workers joined Solidarity within the first year of its launch). The self-exiled Polish director immediately conceived a script (the script is said to be written within 2 weeks) to make a subtle & intriguing political statement on the clampdown.

Jerzy Skolimowski filmed “Moonlighting” was made steadfastly in the winter of 1981, in West London and  was released in 1982, winning the Best Screenplay Award in Cannes Festival. Although, the film was made with urgency, the director’s simple ideas are fully realized and it can be appreciated on many levels. “Moonlighting” opens with a flight announcer calling for the flight from Warsaw to London. The customs officer finds some masonry tools in the suitcase of four Polish men as a look of anxiety is cast over their faces. The men eventually fly to London and the leader of the four named Nowak (Jeremy Irons), practices few words in English (“The purpose of our visit to London is to buy a second-hand car with joint-savings") to say it to the London Customs Officer. Of the four, only Nowak could speak English and he shows 1,200 pounds that is to be spent on their ‘purpose’. But, the distressing looks of Nowak hint us that he is concealing something. 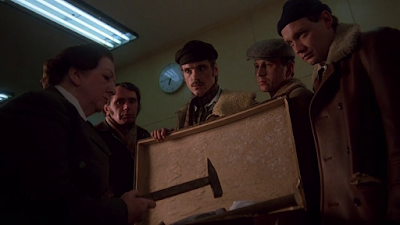 Under the cover of their one month visitor visas, the four Poles arrive at a bedraggled flat. Nowak and his mens job are to perfectly remodel the flat within a month (the flat belongs to their boss) and get paid in Zlotys. For the men, the wages they are going to be paid is equivalent to the amount they earn after 10 months hard labor in Poland. The boss also gets a better deal because he just has to pay quarter (including the men’s air tickets) of what the British builders would seek for such a job. The trademark Eastern European dead pan comedy is laced with the narrative, especially when the men look at lavish elements of capitalist society (they laugh like a child after seeing coca-cola and color TV). Nowak does everything to make ends meet and keeps the men on a tight leash. Trouble starts when Nowak hears about the imposition of Martial Law in Poland and hides the news from his compatriots. He also has maddening thoughts about his beautiful wife Anna and also encounters immense difficulty with the shoe-string budget. 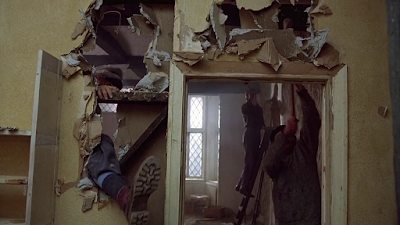 “Moonlighting” is often purported to be an allegorical representation of the simmering conflict between Soviet/Polish government and the Polish workers. Nowak’s characterization is viewed as a metaphor for the increasingly oppressive nature of the government. Director Skolimowski’s dialogues bring strength to this theory. Nowak’s tactics to keep the men under the dark and the way he quells the dissidence somehow reflects the manner the communist regime behaved in 1980’s Poland.  At first, Nowak treats Banaszak, Kudaj and Wolski like children, who aren’t aware about the pitfalls in the surroundings. He appoints himself as a guardian looking over what they need and don’t. Gradually, Nowak himself becomes like his oppressive Polish boss by telling lies, driving them hard to work and paying them by food. The English speaking ability imbues a little arrogance in Nowak, making him to think that his fellow Poles are only chosen for their stupidity (for not being able to see this situation from the boss’s side). However, as time progresses, the men learn that they don’t need Nowak to thrive in this environment. The trust they have placed in Nowak also starts to erode, which reaches a culmination point as the hidden truth reaches their ears. 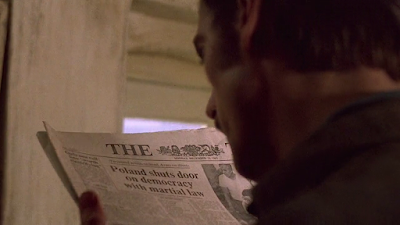 Although the character of Nowak crosses the line of general ethics, he is depicted in an empathetic manner. Even if you aren’t aware of the Solidarity Movement or Polish political background, the deadpan and humanistic characters makes up for a wonderful treatise on the temptations and isolation of materialist environment. It could be contemplated as a simple survival movie, where a man learns to live off the land which sometimes contradicts from the rules set by the society. It could be interpreted as one man’s inner struggle for attaining personal success and loyalty. One of the recurring visual motif or symbol in the film is the ‘windows’. London may not be the watchdog city like Warsaw, but still Nowak has the same anxious feeling of being watched or judged. He is still watched from the windows of supermarket or the neighbors (at one point, Skolimowski places a close-up shot of supermarket camera to insist on how Nowak is always on the watch). The only difference is that Nowak also gets to watch and judge on others, which might be absent on a totalitarian state. 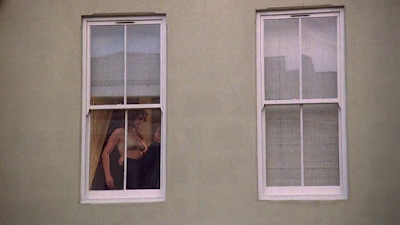 Nowak grows wary about his wife’s fidelity as he looks into the window of opposite flat, where a man who looks like his boss has a weekend affair with a housewife. It is through the window he sees the worsening situation in his nation and when he steals a bicycle and brings it inside his home, Nowak immediately covers up with the window. Nowak’s soul which was enclosed within a slender space in his country seeks for new ideas, hopes and dreams in London. Sadly, the eye which serves as the soul’s window only brings him misfortune in various forms. The impassive humor works wonderfully in such situations (especially when he tries to pick up the sales girl in wrangler showroom) when his silly ideas are shattered. The misfortunes were made possible mainly because of Nowak’s thought that London is the haven he sought after. But, gradually he learns that people in London could also be cruel; that they might also push you to something erratic; that one’s desire could outpace the money he possesses. 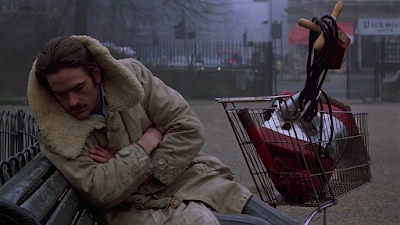 One of the well designed ironical humor by director Skolimowski is the way the house gradually gets brightened up as darkness hovers around the men’s heart due to dis-trustfulness & lies. In reality, the West London House belongs to Skolimowski and it was undergoing a renovation. The director himself plays the blink-and-miss cameo as the Polish boss. Jeremy Irons as Nowak gives a measured performance, striking the right chords as he transcends from being a benevolent overseer to a slightly authoritative guy. We could also recognize the agony of his past victimized nature.

“Moonlighting” (97 minutes) is a darkly humorous humanistic tale that is handled with a deft touch and imbued with subtle political allusions.