The Yellow Sea – The Rage of Doomed Men 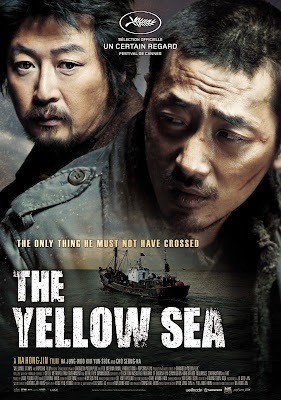 Yellow Sea is the name given to northern part of the East China Sea that’s located between Korean peninsula and Chinese mainland. Joseon-jok is the name given by South Koreans (considered unfriendly) to the millions of ethnic Koreans living outside Korean peninsula in China as the citizens of People’s Republic of China. These people are alienated, who are mostly employed with hard labor jobs, both by their Chinese compatriots and South Koreans. From this standpoint, for the Joseon-jok people, the ‘Yellow Sea’ might be a symbol of alienation or hopelessness, as isolation close in on both sides of the shores. Korean film-maker Na Hong-jin’s second feature film “The Yellow Sea’s” (2010) protagonist is a Joseon-jok, who is discriminated, falsely incriminated and stabbed at. He brings out the hopelessness confronted by his people, but “Yellow Sea” isn’t just a bittersweet film that tracks the livelihood of a persecuted immigrant; it’s an exhilarating and unbelievably coincidental action/thriller.

Director Na Hong-jin made his debut with the much-talked about serial killer thriller “The Chaser” (2008). The debut was regarded and equated with the works of Korean New Wave film-makers Park Chan-Wook, Bong Joon-Ho and Kim Jee-Won. So, it is very important to mention earlier that “The Yellow Sea” reaches the heights scaled by those modern Korean auteurs, although it bestows a frequently thrilling movie experience. The movie begins with the protagonist Gu Nam (Ha Jung-woo) squandering the little money he has earned the previous night as a taxi driver by playing mah-jong. He has had a lot of drinks and as he tries to sleep, couple of tough guys beat him up to pay off the debt that’s mounting up day-by-day. As the sleepless Gu Nam gets down to his taxi, he seems to have punched at the photo frame, where he and his wife are standing in their wedding attire.

We learn that Gu Nam has borrowed a lot of money for the visa to send his wife to South Korea, in hopes of getting a better job. But, it’s been six months since she has left Gu Nam and their little daughter. She hasn’t sent any money or even a letter regarding her whereabouts. Everyone from the wife’s father to debt collectors state that she has an affair with some South Korean. They say that it happens often with the woman traveling to Korean peninsula for a better life. Gu Nam’s mom also expresses her doubt about his wife: “her eyes are so slanted… They are split open like a vagina”. Gu Nam dreams about his wife having passionate sex with some stranger. During one of those bad gambling days, Gu Nam is insulted for his ethnicity and the consequent sight of his rage beholds the attention of a Korean gangster Myun (Kim Yun-seok). Next day, the loan sharks introduce Gu Nam to Myun, who promises to pay off all his debts for one simple job: to do a contract killing in Seoul. 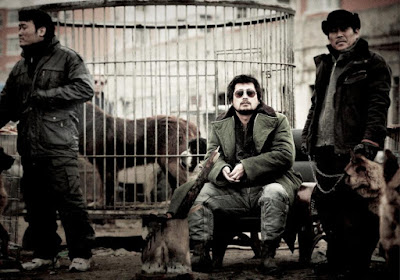 Gu Nam is reluctant to accept the offer, but his wild visions of his wife’s alleged affair makes him to accept the job. The job also provides him the opportunity to search for his wife. Gu Nam makes his horrifying illegal journey in the clammy bowels of a fishing boat, along with other poor souls, to South Korea. Myun has given nearly two weeks to Gu Nam for the killing, and if he botches the plan or goes off the radar in Seoul, his daughter and elderly mother would be murdered. Gu Nam wanders through Seoul with his wife’s photograph and at the same time observes at his target like a secret agent. He selects a day for killing after detailed plans, but an incredible and deadly coincidental happening plunges our protagonist into a web of deceit & intrigue.

Although “The Yellow Sea” could be called off as an action/thriller, we can strongly associate the movie’s narrative and themes with that of sub-genres like ‘neo-Noir’ and ‘black comedy’. It also has the usual Korean ingredients and slick production values. Renowned critic Mr. Raghavendra (in his book “Directors Cut”) calls this familiar Korean ingredient as ‘casual brutality’. From Lee Chang-dong’s “Pepppermint Candy” to Kim Ki-duk’s “Pieta”, Korean protagonists and antagonists don’t neatly fit into the frameworks of their respective roles. Through their causal brutal nature and lack of compassion, they make us reassess their characteristics. Korean film-makers tend to heighten this inherent brutality, especially when they are approaching characters that are normally perceived as vicious ones by general public. Bong Joon-ho’s in-competitive main guy in “Memories of Murder” and Kim Jee-woon’s caved in hero of “I Saw the Devil” are some of the few examples, where this ‘casually brutal’ nature has an extraordinary, lacerating effect on the viewers. Director Na Hong-jin’s protagonist in his debut feature “The Chaser” is a pimp, a deeply flawed character. But, as the narrative progresses, we look through his flaws and root for his vicious attitude to catch the more deplorable serial killer, who is killing the prostitutes. 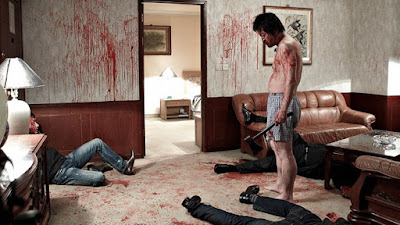 In the same vein, Gu Nam and Mr. Myun in “The Yellow Sea” are not likable characters. They are driven by rage and revenge, but their causal brutality becomes enthralling as we perceive the antics of bourgeois villains. Korean Neo-Noir’s that perfectly entrench this Korean ingredient not only changes viewers’ understanding of the blurred lines of good & evil, but also raises the bar of tension and excitement to the highest levels. Despite the characterization and performance of actors playing Gu Nam and Myun, “The Yellow Sea” never reaches the greatness of its predecessors, mainly because of its digressing script. At 157 minutes, the theatrical cut wavered a lot without clearly depicting the character motivations for a majority of running time. Hong-jin’s director’s cut (140 minutes) version was better, but still would leave the viewers scratching their head, trying to figure out the parties involved in the killing. 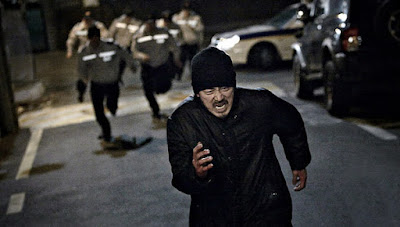 Director Hong-Jin deliberately leaves certain things with an air of ambiguity (the fate of Gu-Nam’s wife), but other muddled plot points couldn’t be related with ambiguity. Hong-jin starts the film spectacularly with Gu Nam, recalling his childhood memory of a rabid dog in his village. As Gu Nam finishes the brief story with the words ‘Rabies is spreading’, we could guess at the callous and downbeat things that are going to happen in the narrative. The rage, fear and isolation of the protagonist works as a nice analogy to the event he recalls at first. Gu Nam's furious beatings, hard escapes and final fate reminisces us of the tale of rabid dog. On the other hand, the axe-wielding gangster part of Myun imbues a darkly comic nature to the film. His unbelievable escapades and the consequent reactions of his South Korean counterpart are offensively joyous parts. Most of the action sequences involving Myun are kept off-screen, mainly to enhance the black comedy elements.

Hong-jin may not have elegantly unfolded the multiple layers of lies, deceit and deception in the script, but he has certainly amplified the tension through the long chase & fight sequences (credibility is stretched in some of these sequences). The violence in some of these sequences is insanely brutal that all it makes us to do is chuckle at it. Despite its downbeat nature, the savagery is depicted in a slick manner, like the ones we often experience in a Tarantino movie. Another flaw with the film is that there are no notable female characters in the film (it was the same in movies like “Oldboy”, “A Bittersweet Life”, etc). The few females present are shown off as treasured objects, inciting all the bloodshed. Hong-jin might also have missed out a chance to depict the barbarous treatment of Joseon-juk – people with no homeland (although that image in the fishing boat, where the immigrants are huddled together, is very haunting).

“The Yellow Sea” (140 minutes) could have been a robust, contemplative, hard-edged piece of work, if only it had jettisoned its petty digressions. Nevertheless, it is an energetic, commercial thriller with ingenious set-pieces.


The Yellow Sea aka Hwanghae -- IMDb
at September 14, 2015
Email ThisBlogThis!Share to TwitterShare to FacebookShare to Pinterest
Labels: Korean Cinema, Thriller