The Taste of Tea – A Strange and Positively Infectious Family Drama 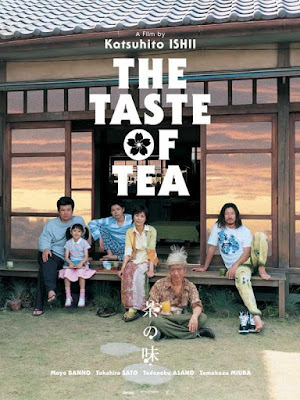 Japanese film-maker Katsuhito Ishii’s name was brought to spotlight when he supervised the animated sequences in Quentin Tarantino’s “Kill Bill: Vol 1” (2003). In his homeland, Ishii was recognized as the maker of eccentric, surrealistic flicks like “Party 7” (2000) & “Sharkskin Man and Peach Hip Girl” (1998). His films are diffused with strong and weird manga plus anime influences. Just when Ishii was written off only as a cult film-maker, he shocked cine-buffs by conjuring up a unique family drama “The Taste of Tea” (2004), which also possesses the right amount of what we could call as ‘Ishii wackiness’.

French film-maker Jean-Pierre Jeunet, Latin American novelist Gabriel Garcia Marquez, American film-maker Wes Anderson, Taiwanese auteur Edward Yang and Japanese actor/film-maker Takeshi Kitano are some of the names that immediately comes to our mind when watching “Taste of Tea’s” magical realism and magnificently detailed emotional quirkiness. But, at the same time Katsuhito Ishii’s vision of this Japanese family is as idiosyncratic as it could be. “Taste of Tea” demands a lot of patience from viewers like Ishii’s previous works, since this isn’t a movie on a dysfunctional family with a central crisis or three act script structure. It is very much episodic like Yang’s “Yi yi” (2000) and dispersed with post-modernist and absurdist flourishes. 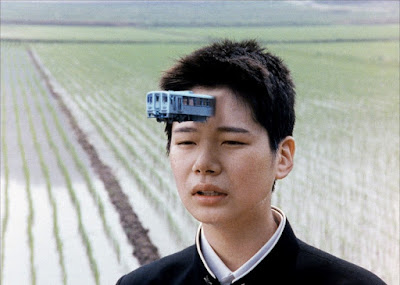 Similar to Japanese master Yasujiro Ozu’s [idealized] works, “Taste of Tea” documents a brief but a trialing phase in the life of Harunos – a middle class family residing in Japan’s idyllic prefecture, Toguchi. The film starts with the family’s teenage son Hajime (Takahiro Sato) is running to watch the train that carries his secret crush out of the town. As the girl and train run out of Hajime’s life, an illusionary train emerges from his forehead, indicating the emotional void of his soul and also establishes the film’s quirky tone. Sachiko (Maya Banno), the six year old child, is frustrated by the time it takes for her to grow up. She feels that a giant version of herself is following her around and that it won’t disappear unless she does a back-flip in a handle bar, on a dilapidated playground (this thought is implanted by her uncle’s bizarre childhood experience). 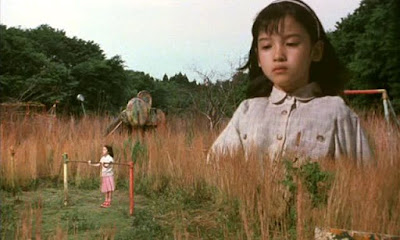 Mother Yoshiko (Satomi Tezuka) and father Nobuo (Tomokazu Miura) seems to have lost themselves to their jobs. Yoshiko works at home on an anime project, which she hopes will redeem her career. Nobuo is satisfied in performing his monotonous hypnosis practice in the city. The most eccentric member of the family is Grandpa Akira (Tatsuya Gasyuin), who seems to be mime artist and acts out stances for Yoshiko’s anime heroes. He also carries everywhere a tuning fork to perfect his vocal pitch. The other members of the family are cool-headed Uncle Ayano (Tadanobu Asano) – Yoshiko’s younger brother, and a miserable Manga artist – Nobuo’s brother. As the family threads are gradually drawn together for an emotional impact, we also often run into moderately strange episodes and characters. 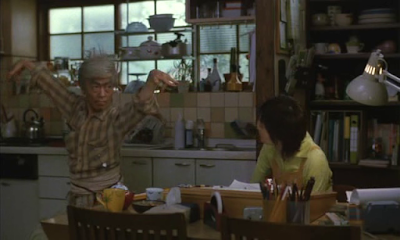 Unlike the celluloid, dysfunctional family (for example “Little Miss Sunshine”), “Taste of Tea” isn’t riddled with formulas or caricatures and it doesn’t relent to the pressure of putting up some dramatic encounters. While the slightly demented nature of a family in American flicks is tend to be tuned up for concocting comedic situations (with less emotional wallop), director Katshuto Ishii boasts the Haruno family’s zaniness from the very first frame and then slowly persuades us to view them in an affectionate manner. Ishii depicts a family that might be totally unlike ours, but as the narrative progresses we feel that this Japanese family too has the same fractured dreams and thoughts like ours’.  Eccentricities can transform into cluster of gimmicks if its tone undermines the dramatic impact of the narrative. But, director Ishii creates some funny irrelevant magical realism sequences that are very charming. The gang of bikers, the weird baseball player by the river, a woman employee beating up her envious boss (with a boxer’s movements) and the two guys clad in super-hero suit, traveling by the metro are all some of the quirky humorous moments that adds fine background to the languid images of pastoral landscapes. 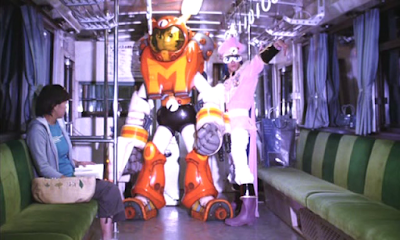 Director Ishii also derives humor from the strange fixations and dreams of the characters. The whole unstructured plot is about chasing dreams and recuperating ourselves when those dreams vanish. Hajime at the start of the film sees his dream disappearing over the horizon and in the rest of the narrative he establishes a new dream and also sees his life from a fresh perspective. The scenes involving Hajime were as realistic as in real-life. We could really feel his uncomfortable postures when he sees his beautiful classmate, Aoi (Anna Tsuchiya). The sequence when Hajime throws an umbrella to Aoi and runs blissfully into the pouring drops was shot spectacularly, taking us back to that phase of our life. Apart from the climactic heartwarming sequences, one of my other favorite episodes is when Uncle Ayano meets his former sweetheart and an awkward conversation ensues. 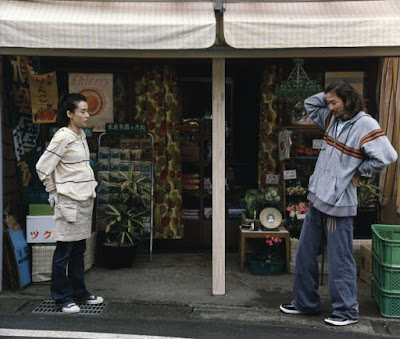 If chasing the dreams is a vital theme in “Taste of Tea”, the way the characters react after attaining their dream is also a fascinating aspect. The satiated feeling with which the family sits on the wooden floorboard, facing the idyllic landscape (and sipping tea) after achieving some little victory in life is envisioned perfectly. Yoshiko after redeeming her career or Sachiko after doing the back-flip doesn’t jump high, whopping the air. Despite their eccentricities, the characters act like human beings in those situations (a little smile brightening their faces). They seem to understand that desires and little achievements in our life journey are always irregular and that the small joy of being together as a family, or as a community is the only tangible force or bliss which matters the most. 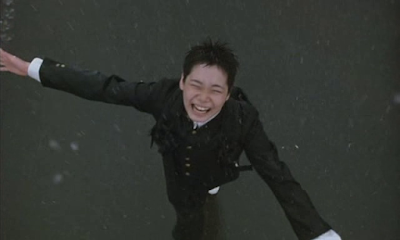 Ishii’s brand of magical realism and surrealism wouldn’t have succeeded in “Taste of Tea” if not for the phenomenal actors of different ages. The most two captivating actors who subtly expressed their grief and joy are Banno (played little Sachiko) and Sato (played Hajime). Director Ishii and cinematographer Kosuke Matsushima has only evoked soft colors and mostly plain background. This restrained approach over the visuals accentuates the oddities and delusions faced by the characters. If Ishii’s bizarre visions are outstripped from this film, a cinephile would find a lot of elements that’s very close to Japanese master Ozu. Similar to Ozu’s mode of film-making, Ishii often juxtaposes the family’s quibbles with that of the placid landscape, situated around them. Like Ozu, Ishii too starts off a scene before it should really start (from a cinematic perspective) and allows the camera to linger around the frame even after the conventional sense of the scene has ended.

“The Taste of Tea” (143 minutes) is definitely not for all tastes. There are lot of metaphors and uncanny designs that aren’t fully graspable. But, like all good art, the film made me marvel at its moments of genuine grace. Like, a character in the movies says: “Weird but cool!”

I have never seen a Japanese movie. May be with subtitles it should be easy to follow, will look out for one.

Thanks for sharing.. :)
UK
http://www.fashionablefoods.net