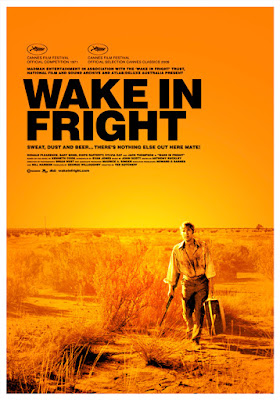 Early in the Canadian film-maker Ted Kotcheff’s underrated Australian outback classic “Wake in Fright” (1971), the protagonist John Grant (Gary Bond), a haughty school teacher in the outback, dreams about his beautiful girlfriend Robyn swimming on the beach. She slowly emerges from the water and comes closer to John in a sexual manner as he places a beer between her breasts. The flush surroundings, sexual desire and a cold beer are all what John hopes for as he is making his Christmas holiday trip to Sydney. Sex and alcohol really consumes John in that holiday trip, but it turns out to be his life’s most nightmarish experience and also he doesn’t make it to Sydney to meet Robyn. “Wake in Fright” could be deemed as one of the exhausting movie experience a viewer could have; not because it is just a boring movie, but since pulls us into the heart of darkness and shows the meaning of hell through the unbridled exhibition of masculinity.

“Wake in Fright” premiered at 1971 Cannes Film Festival and did well in the European art-house circuits. It wasn’t well received in America and in Australia the movie failed big since it was thought to have portrayed an insulting & abrasive view of the outback Ausralians. Although the movie gained the label ‘cult classic’, it was almost forgotten until it resurfaced in Cannes (shown under classics banner; after Antonoini’s “L’Avventura”, “Wake in Fright" was the only movie to be shown twice in Cannes) in 2009 after an impeccable digital restoration (thanks to a ten year quest by Australian producer & editor Anthony Buckley). It was circulated under the label ‘one of cinema’s long lost classics’ and now in the last five years, it has become one of the most talked about Australian film. 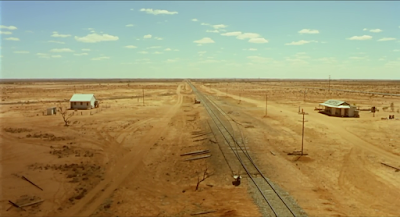 “Wake in Fright” was made a year before the American classics “Deliverance” & “Straw Dogs”. Both the movies depicted the dark side of masculinity and its propensity for violence. It also portrayed how civilization could be replaced with mindless savagery even with the slightest provocation. Although these films imbued a balanced approach towards the frontier or outback people, it paved way to a lot of stereotypical exploitative American movies. “Wake in Fright” was based on the 1961 novel by prolific Australian novelist and journalist Kenneth Cook (script written by British writer Evan Jones). The story takes place in a fictional town named “Budanyabba”, which was actually based on Broken Hill in New South Wales – one of the most isolated inland towns in Australia. Director Ted Kotcheff has stated in interviews that he spent some time in Broken Hill (like the author) before filming. 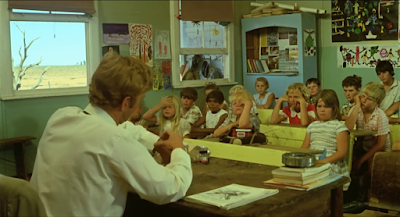 “Wake in Fright” actually observes its hyper-macho characters and never takes a moralist stance to condemn the people of outback. The narrative looked more disturbing than “Deliverance” because the protagonist is partly the reason for his downfall. John Grant is both a victim as well as a perpetrator. Kotcheff’s gets into the observational mode from his first expansive, overhead shot, where the camera pans 360 degrees to show the view of outback town “Tiboonda”. A rail-road track runs through the parched landscape and a small stage makes up for a station platform. Only two buildings are in our view, each placed parallel on either side of the tracks. One is the school building, where Grant is looking at his watch and the blank-faced children are waiting calmly. As the right time strikes off, the elated children run off to enjoy their Christmas holidays before courteously wishing their teacher. Grant slowly makes his way to the other building, a bar incorporated with lodges. He packs his suitcase, has a drink and takes the train. 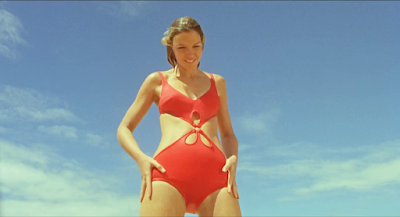 As he enters the train, a hospitable man offers him a beer, which Grant refuses. He has the aforementioned dream about Robyn on the train and later makes it to the town of “Bundanyabba” (shortly called as ‘Yabba’). The cab driver joyfully talks how great the town is. Grant checks into a seedy hotel. The charge for the room is $4 and $1 as deposit, to be returned after the check-out. Grant is looking forward for his morning flight to Sydney and in the night he goes for a drink in the town. A very hospitable sheriff Jock Crawford (Chips Rafferty) buys him a beer, while Grant shares disdain for outback towns.  Grant feels superiority over the townsmen, who drink and play simple-minded games. He hates their ‘aggressive hospitality’. When Grant makes one of his snobby remarks, the mysterious ‘Doc’ Tydon (Donald Pleasance) says “its death to farm out here. It’s worse than death in the mines. You want them to sing opera as well?” Gradually, Grant lets the delirious spirit of Yabba to affect him. The drink keeps on coming and the superiority is stricken down by the vice of gambling. Grant loses all his money (except for that $1 dollar) and literally wakes up naked in his bed, the next morning. He is swept up by a maelstrom of a group of hard-drinking & hard-living guys and witnesses different forms of brutality.

Director Kotcheff and writer Evan Jones have made enough research to not make “Wake in Fright” into a one-sided outsider view of Australian outback. Although Yabba brings out Grant’s descent into madness, his own perception on money and easy life is shown as the triggering point for the downfall. Doc Tydon says “Discontent is the luxury of well-to-do” as Grant views the Yabba men as vile creatures. When Grant himself was stripped of luxury (the money), he just has no other choice than to surrender himself to the unchecked primitive instincts. Kotcheff and Jones are careful to never push Grant into life-threatening situation as the group of friends confront in Boorman’s “Deliverance”. The miners Dick and Joe plus Tydon’s antics are overly aggressive and domineering, but the situation never becomes that the men are deliberately torturing Grant to do things. Grant joyously gets into the social rituals because he has lost his luxury and his hope on the profession. The most disturbing thing about the film is not the indigestible way of living of these men, but Grant’s judgmental perception and his inability to relate to people devoid of opulence. Grant’s descent is in way a defeat of his educational life, which has only clouded his perceptions. 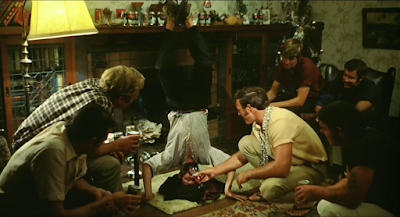 Jones and Kotcheff repeatedly & subtly refer to this clouded perception of Grant. One of the earlier hints is his dream about Robyn. She is not a symbol of love, but only a symbol of carnality, which Grant wants to consume just as he wants to accumulate the easy money through gambling. The nightmarish experience the protagonist has might be condemned as too dark to be close to reality, although alcoholism has always been the biggest problem with isolated towns, all over the world. But, then Grant’s experiences are not diffused like assortment of vile elements. He always has the chance to say ‘enough’ and ask for some help (his pride refuses to borrow money). One of the laudable aspects of Jones’ script is the complex portrayal of Janette Hynes (Sylvia Kay) – the only characterized female player. The women in those towns weren’t allowed inside pubs or clubs. So, they basically trapped inside the confines of house, bringing in beers when their husband’s or father’s friends arrive to socialize. Janette’s desolate looks just becomes emblematic of the psychological agonies, endured by the townswomen. Her promiscuity is also viewed differently from Tydon without refraining to judgement. 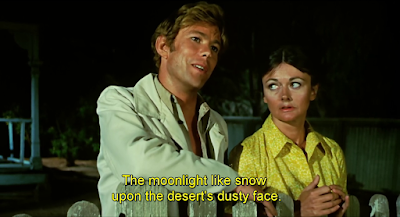 The characterization and the little quirks of mining men Dick (Jack Thompson) and Joe (Peter Whittle) keeps us intriguing. They aren’t the archetype villains for this movie. The duo are just living their routine life, but still everything from that hand squeezing to the jubilation over kangaroo killings would perfectly unhinge a viewer.  Director Ted Kotcheff, in an interview to ‘Senses of Cinema’ talks about how he planned to film a scene that shows Dick and Joe working in the mines. Kotcheff adds that if the scene in the mines were filmed it would have given more perception for viewers on why these men are acting crazy and drinking themselves to death (“It was the heat and dust and lack of women that was contributing to their behavior”). Nevertheless, the most talked about or the most shockingly visceral scene in “Wake in Fright” is the kangaroo hunting. Documentary footage of actual kangaroo hunting was seamlessly edited into the movie. We actually witness these genial creatures being brutally killed on camera and it takes some time to digest that fact. Producer’s note states that the documentary footage was included after consultations with animal rights organizations in both Australia and UK. The footage was expected to create contempt among general public for hunting kangaroos (the couple of kangaroos that’s confronted by Dick and Grant in the movie weren’t harmed). 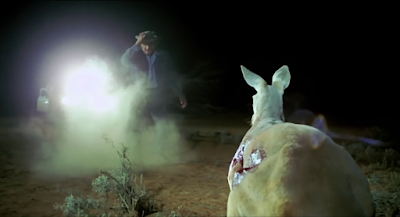 One of the recurrent visual motifs in the film is the blinding or bright light. Light, which is always viewed as a symbol for clarity, is ironically used in the vital sequences, whenever Grant is about to take another step-down towards hell. The blinding light in the pub, before the coin toss, ruins him of his money & pride and later the spotlights during kangaroo hunting brings out Grant’s more animistic side. Despite the claims that “Wake in Fright” only showcases the darkly fanciful view of outback, the people are shown in a balanced manner. The movie starts with one of Grant’s student giving him a gift for Christmas. The sheriff is affable man, who could have helped out Grant if he had asked and so does Mr Hynes. The townspeople stand to attention when the Anzac war memorial, in remembrance of the town’s dead soldiers, is recited on the radio. The truck driver, who promises to take Grant to the ‘city’, didn’t charge him for the trip and has returned back Grant’s rifle (let’s also not forget the guy who drives Grant over ’50 miles of heat and dust’). These random acts of kindness may not cling to our memory like the actions of Dick, Joe, Janette and Tydon, but these innocent random people stops us – the sophisticated audiences – from making the easy judgments. May be the ambiguous message in the film is not to think that we are all superior over these men. It subtly asks us what you would do if you are put under the same circumstances as these men.

“Wake in Fright” (114 minutes) is one of the most haunting and terrifying works of cinema about unchecked masculinity and isolated towns. The movie is frightful because the five decade old story line still seems to not have lost its relevance.

Ted Kotcheff's Interview -- Senses of Cinema
at September 29, 2015
Email ThisBlogThis!Share to TwitterShare to FacebookShare to Pinterest
Labels: Cult Classic, Films from 'Down Under', Hard-Hitting Movies

Interesting psychological story. Grant seems to have called upon the suffering on himself by not knowing where to draw the line.