My Mother – An Introspective Examination of an Agitated Film-Maker 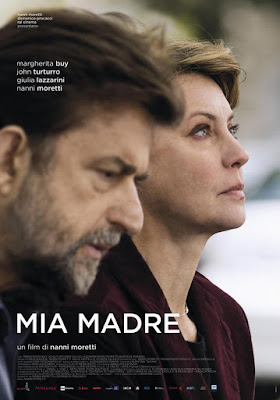 Nanni Moretti is one of the important Italian film-makers succeeding the great new-wave film-makers (Fellini, Antonoini, etc), who revolutionized world and Italian cinema. His early art-house comedies earned him the name “Italian Woody Allen”, although he had switched to making serious and wry films, especially after Palme d’Or winning “The Son’s Room” (2001). His satiric political movie on the controversial Italian Prime Minister Silvio Berluscoi (“The Caiman”) and the unusually funny Vatican tale (“We Have a Pope”) weren’t as critically appraised as his previous semi-autobiographical or his fantasia movies (I personally cherished both his bittersweet social critiques). Now, with “Mia Madre” (aka My Mother, 2015), Moretti once again returns to his autobiographical territory. Cinephiles might find this film less cathartic or touching than Moretti’s masterpiece “The Son’s Room”, even-though many of that movie’s themes are explored here too (death, self-doubt, etc).

Moretti’s whimsical substance and considerable pathos in “My Mother” reminisces us of the works of Abbas Kiarostami rather than Woody Allen. In this nuanced and tranquil family drama, Moretti rises above that strictly auto-biographic nature to infuse some universal statements.”Mia Madre” may not be the Italian director’s best, but its one of his more mature & sublime works.  Moretti’s latest film is a about a anxious, self-absorbed woman filmmaker, whose mind is occupied by the imminent loss of her hospitalized mother. The obvious autobiographical angle comes from the truth that Moretti lost his mother during the filming of his last film “We have a Pope”. Despite the ‘My’ in the title, Moretti has chosen a woman to represent himself, perhaps to provide us with an extra creative dimension. Oddly, the woman film-maker has a compassionate sibling to lean on, who is played by Moretti himself. So, the director is referring to us that he is an amalgamation of both these characters – one racked by self-doubt, while the other blessed with some clear insights. 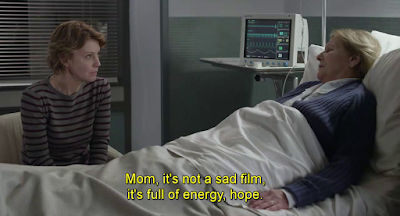 “My Mother” commences on the shooting of a film, where the acclaimed film-maker Margherita (Margherita Buy) is making her latest social-realist drama. Her ex-lover Vittorio (Enrico Ianneillo) is one of the cast members and the crew is shooting few of the stand-in scenes, before the arrival of American star Barry Huggins (John Turturo). Margherita looks a bit distracted and at the end of the day, she goes to the hospital to visit her mother Ada (Giulia Lazzarini), a retired teacher of classical languages. Ada is cared for by her elder son Giovanni (Moretti), who has taken a long leave and has no intention to return to his mundane job (at an engineering firm). Margherita is swept up by the emotional turmoil of losing her mother as the doctor warns that Ada’s time might be short. Margherita has only recently moved out of the apartment of her lover Vittorio and is now staying at her mother’s house. Her teenage daughter Livia (Beatrice Mancini) and ex-husband are on a skiing trip. 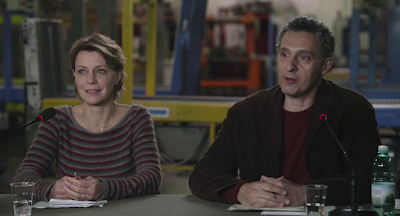 Guilt, fear and self-doubt racks the mind of Margherita as the impending death of her mother hovers around. Margherita’s stay at her mother’s house brings up haunted memories of the past. Her confrontation on mother’s mortality only brings nerve-wracking doubts about her own existence. The arrival of bothersome American actor Barry only escalates her insecurity. Ada is tired of being in the hospital and is increasingly uncertain of her own memories. Despite such a melodramatic core, Moretti isn’t up for doing a straight-forward, moving family drama. The script is mixed with sensitive euphemisms, splendid Meta shots and also a satiric look at film-making process. 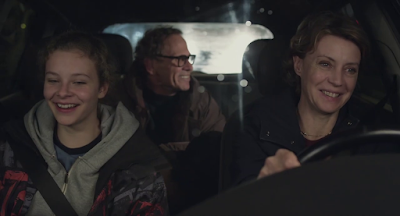 “My Mother” is mostly about a film-maker, who is increasingly unable to isolate her directorial persona from her private life. Margherita’s uncertainty and ignorance of her mother’s fate reflects with her self-doubt on the film set. Her improbably pertinent dreams symbolize the inability to express simple motions life grief and love. Moretti’s script alternates between hospital rooms to the factory set, observing how the unrest in one arena is causing the other. May be the clash between the director’s private and public life weren’t as perfectly amalgamated as one would expect it to be. The comic interludes or the slapstick nature of Margherita‘s film-making chore might have undone the intimate family drama elements. But, it is clear from the first that “My Mother” isn’t deep exploration about death or grief (like “The Son’s Room"). It is more like Moretti observing and admitting his own misdeeds with some self-irony. 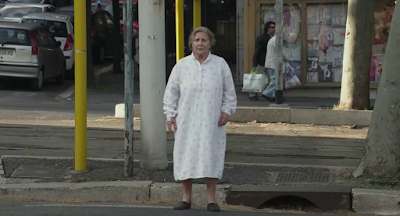 The thematically related film-making moments at times feel too contrived. It seems those episodes were designed to evoke a set of reactions from the central character. But, Margherita Buy (who plays the director) and John Turturo (his acting on a camera car was absolutely hilarious), playing the cliched role of American actor, elevate the contrived material to diffuse us with some grandstanding. Another element that seemed a bit under-developed is the relationship between Vittorio and Margherita. At one point, Vittorio says some acidic words about Margherita’s character nature. Since we are shown little about the lead character’s past, the accusations seem more like a bickering. The character of Ada, however, was very well written. The mother is satisfied with the life she has had (doted by her former students) and Moretti didn’t inject some fall sense of morbidity over her illness. To bring a little verisimilitude, director Moretti is said to have brought his mother’s things for the shoot. 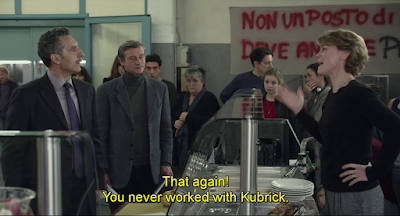 There are still plenty of great moments in the film to dwell on. In one scene, Livia irritably questions on the importance of learning Latin to her mother. Margherita’s vague answer to Livia is a joy to watch, because her insistence on Latin to Livia is one way to lament on Ada’s memory (Ada being the teacher of Latin). Once again in this scene Margherita is unable to express herself because of that resonant theme of uncertainty. Some bits of broad comedy pokes at Moretti’s profession, especially Marghterita’s attempts to push her actors into a more relaxed performance style (“I’d like to see the actor next to the character”), which only confuses them more. The ending was perfectly understated without betraying any loud emotions.

“My Mother” (108 minutes) is a nuanced and elegiac observation of a woman facing existential crisis. This restrained family drama from Italian auteur Nanni Moretti definitely demands a lot of patience and a reflective mood.