The Hedgehog – A Charismatic Tale of Three Misfits 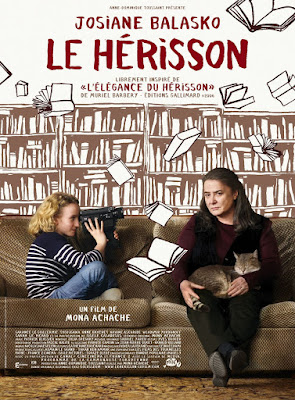 At the beginning of French film-maker Mona Acache’s directorial debut, “The Hedgehog” (2009), we see a bespectacled 11 year old girl in a dark room, holding a torch in one hand and talking to her ever-present companion, a video camera. She states how rich her Parisian family is but doesn’t want to ‘head for the fishbowl, a world where adults bang like flies on the glass’.  The girl‘s choice of words and metaphorical statements strongly suggest that she is a mature & intelligent girl. Nevertheless, the 11 year old finishes her brief speech by stating that the ‘fishbowl is definitely not for her’ and that she is going to end her life on 12th birthday. Despite the onerous declaration by this pre-teen, something suggests us (may be the 11 year old reminds us of Jean-Pierre Jeunet’s capricious character) that the film is going to be whimsical rather than a lamentable drama. Actually, “The Hedgehog” diffuses both the elements: a whimsical melodrama. It is deplorably contrived at few junctures and remarkably touching at others.

The movie is based on the best selling novel, “The Elegance of Hedgehog”, by French philosophy professor and novelist Muriel Barbery. Although, there might have been many changes between the novel and its adaptation, we can see that existentialism is one of the chief themes of the story. Paloma Josse (Garance Le Guillermic), the precocious girl we met in the first scene, is in fact burdened by her fairly standard, unremarkable rich life. She hates to exist in this world as an adult. Paloma’s father Paul (Wladimir Yordanoff) is a minister, who is either in a command mode or busy mode. Mother Solange (Anne Brochet) has been on therapy and takes anti-depressants for the last 10 years. She talks a lot with her plants than with Paloma and thinks that the little girl is the only ‘oddball’ in the family. Paloma has an elder sister, who is confronting her own teen angst and wants nothing to do with the 11 year old’s ruminations on life. 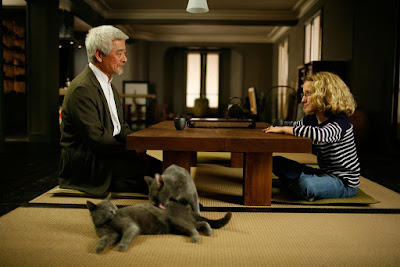 Paloma’s favorite pastime is to hide herself within the apartment complex and to observe her family’s (recorded by a video camera) bourgeois absurdism. If the little girl is literally trying to hide from existence, the apartment building’s 54 year old janitor Renee Michel (Josiane Balasko) has perfected her skills in the aspect of concealing. In both the figurative and literal sense, Michel isn’t often noticed. But that doesn’t mean that Michel is an unremarkable woman. Paloma relates Renee’s characteristics to that of a hedgehog – sharp-tongued & unkempt on the outside, but with a sensitive soul on the inside. The janitor’s sensitive side is evoked by the arrival of a wealthy & elegant Japanese widower, Mr Kakoru Ozu (Togo Igawa). Despite the class differences, they both share the taste of seeking solace amidst the books & classic films. Paloma is also nudged into these outsiders’ world and her fascination about these people gradually changes her perspective on life. 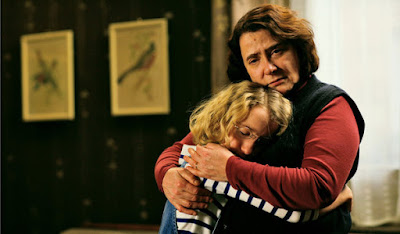 Mona Achache’s adapted screenplay imbues both the high and low points of a best-seller. If the movie’s whimsical nature occupies the high-end of the spectrum, the suggested mawkishness & neat resolutions occupies the low-end of the spectrum. Although the plot is about three eccentric & independent characters, who cherish their private lives and the meaning that’s derived through creativity and art, the script includes few of those manipulative & contrived emotions or elements. Of course these plot formalities are outmatched at many circumstances by the whimsical elements and astounding performances.  In one of her creative endeavors, Paloma fills a glass with water and films her sister through the filled glass, demonstrating how limited the elder girl’s thoughts are (“archetype of the fish in the bowl theory; obsessed by the need to be less neurotic than her mother”).

Paloma also makes some of the ponderous and chuckle-worthy observations. She corrects her father’s friend about the differences between ‘go’ and ‘chess’ and says sentences like “Only psychiatry rivals religion for love of suffering” at the dinner table. Such reflective words not only suggest matured thought process of Paloma, but also subtly depicts her inner pain, especially when the parents brush-off those words as that of an ‘oddball’. Unlike her mother, Paloma doesn’t cry to demonstrate misery, but through her stoicism, we could experience the rejection and loneliness she is facing. The book and Achache’s script seems to be diffused with literary, cinematic & musical references. Those who have great interest in books & old movies might be immediately affirmed with the movie’s wavelength. These names or references make the bibliophiles & cinephiles within us to feel a kinship with the three central characters. However, that doesn’t mean that you need to be familiarized with names like Tolstoy and Ozu to relate to the film’s themes (Paloma in fact seems to have the characteristics of the kids in Ozu’s films. 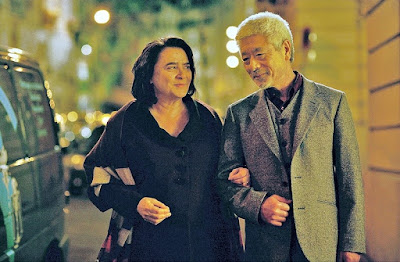 Renee is another tough nut, who openly states that she is unsociable. But, the idea of connecting takes both of them to an elated level. Ozu’s magical presence makes these two characters to gradually crossover their cynicism. The friendship between Ozu and Paloma is pushed through believable limit. Paloma meets Ozu on the elevator and he asks about her interest in learning Japanese. Paloma says few words in Japanese, and Mr. Ozu instead of just marveling at her, corrects her pronunciation. Paloma for the first time might have felt that she has been taken seriously by a human. For the first time, she is constructively criticized rather than treated like a keyed toy. So, a friendship naturally ensues. The same kind of believable slow progression happens in the friendship between Ozu and Renee. Of course there are moments, where the events feel less like a naturalistic drama.

The abrupt, melodramatic climax gives us this unnaturalistic feeling. I felt that the closure didn’t have the emotional and intellectual honesty that drove away the rest of the movie. Class difference is one of the movie’s vital themes, but there weren’t explicit references to this and the theme didn’t narrow the characters’ actions. Of the performers, Balasko as Renee gives the most complete and soulful performance. She wonderfully expresses her terrifying as well as elated feeling, brought out by the friendship with Ozu and Paloma. Igawa’s elegance and insights reminds us of Morgan Freeman and his confidence is certainly infectious. Le Guillermic despite her character’s nature doesn’t come off as self-indulgent young brat. Her smartness doesn’t annoy us like that of the American movie kids.

“The Hedgehog” (95 minutes) is a moving, bittersweet tale of a demoralized pre-teen developing a deep appreciation of life. It is a sublime drama punctuated by few contrived plot turns.

The Hedgehog aka Le herisson -- IMDb
at September 22, 2015
Email ThisBlogThis!Share to TwitterShare to FacebookShare to Pinterest
Labels: Coming of Age Movies, Existential Movies