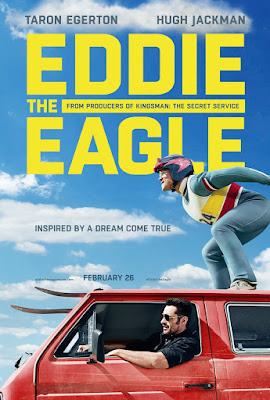 British actor/director Dexter Fletcher’s inspirational underdog story “Eddie the Eagle” (2016) starts as usual with the tag that follows around sports biopic pictures – ‘based on a true story’ (nowadays even ghost stories boast that tag too). In traditional sportsmen biopic, this tag is kind of a warning to not ‘google’ and find out about the life of this particular person before watching the film. Since, 9 out of 10 times, you will be scratching your head wondering about the accuracy and perspective of the true events portrayed on cinema. The poster, plot and actors in “Eddie the Eagle” have clued me in on what to expect from it. I know the existence of Winter Olympics, although I haven’t grasped any details on ski-jumping. I haven’t heard the name of British ski jumper Edwards before reading the plot of this movie and most importantly I was really intrigued because the movie had Hugh Jackman, neither playing Wolverine nor an agonized human being. “Eddie the Eagle” is the kind of underdog story which reminds you of ‘ignorance is bliss’. And in return for your ignorance, you get quite a few inspirational lessons and good entertainment. The feelings of those who expect a formulaic story with abundance of charm will soar like eagle and land safely, but those questioning its schmaltzy elements or nearsighted conventions will only feel like the person hitting head first at the ski floor.

British plasterer Eddie Edwards only learned skiing in his early 20’s and traveled through a wildly unconventional path to represent Great Britain in Calgary Winter Olympics 1988. The champion ski jumpers usually learn skiing, from the age of five or six and they have the best coaches. So, Eddie had no chance from the beginning and all he had was tenacity, determination and lovably goofy aspiration. At 1988 Winter Olympics, Eddie actually became a B-list celebrity, who despite breaking the British record twice (actually not many Britishers tried ski-jumping since 1929), came last in both the ski-jumping categories. The media loved his antics to try and portray as adventurous simpleton. Eddie became the example for ‘taking part not winning is important’ line.  In the narrative, Hugh Jackman plays an imagined character Bronson Peary who coaches Eddie on his landing methods. 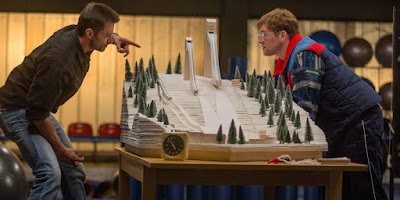 The movie hits every formula you could expect it to hit. Are the well funded competitors portrayed as bullies and snobs? Check. Does the father crush Eddie’s dream and mother supports his dream? Check. Does the British Olympic Association is led by upper-crust men with sneering looks? Check (although this might be a true fact for many Olympic associations around the world). Is Bronson Peary a disgraced ski-jumper fallen into the perils of alcoholism before agreeing to coach Eddie? Check. With all such box-ticking formulas, you only wonder where’s the mundane romantic interest (may be a beautiful girl to equal Eddie’s klutzy nature)? But thank god and writers Macaulay & Kelton for not imbibing false romance. Nevertheless, “Eddie the Eagle” remains highly watchable due to its lead performance from Taron Egerton and due to fittingly broad directorial strokes. 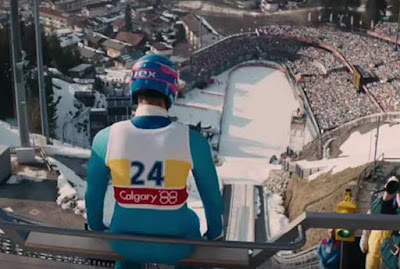 Egerton previously played confident, good-looking young man in World War I drama “Testament of Youth” and in saving-the-world movie “Kingsmen”. Here Egerton transforms him into an unabashedly plucky guy with big eyes peering through enormous glasses. With his presentation of Eddie, Egerton never turns the ski-jumper into a caricature or an object of ridicule. He gracefully diffuses the child-like naivete, awkward demeanor and ardent determination, eventually making us cheer for the man on-screen, although we have per-determined his path and adventures. Hugh Jackman exudes warmth and offers fine support to Egerton, although his role is thoroughly cliched. Director does his best to incite fun within the conventions. Yes, he embraces the routine montages, heroic slow-motions and paints everything as bright and breezy (and the movie is down-step when compared to Fletcher’s good debut feature “Wild Bill”). But, somehow Fletcher saves the movie from sinking deep into the sentimental swamp. The ski-jumps are well staged and have tried to instigate anticipation in each of the ski-jumps . The camerawork is quite in these elevated jump sequences, equally mixing vertigo and pleasure. In the end, Egerton and Fletcher seem like vital elements in not changing this movingly simple movie into a stupidly cliched experience. I also loved the electro score and triumphant soundtracks (whose names I don’t even know).

“Eddie the Eagle” (106 minutes) is simplistic, elementary, and formulaic, but still it boasts a undeniable, charming emotional intensity that keeps us entertained till the last frame. Like the real-life “Eddie”, the movie too won’t win any big medals or awards, although it cheered me a lot.