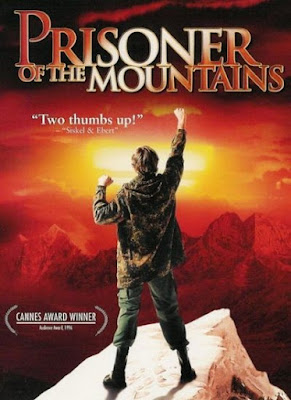 Russian film-maker Sergei Bodrov’s humanistic fable “Prisoner of the Mountains” (1996) is based on Leo Tolstoy’s short story “Prisoner of the Caucasus”. Caucasus, a barren landscape alternately swept by breeze and bitter winds. The people enduring the hardscrabble life in the region have also held on to generations of conflicts, commenced by Russian colonizers and other oppressive forces. The region’s marvelous chants, tunes and balalaika masquerades bloody battles and eye-for-eye hatred. Director Bodrov updates Tolstoy tale to be set in a remote Muslim village (in the 1990's), not far from the disputed regions of Chechnya, fighting for total autonomy from the Russian Federation. “Prisoner of the Mountains” is a simple, universal tale about the absurdities of war. The narrative is neither provocative nor unique, but never fails to stir our heart & mind in its 99 minutes running time. I recommend this movie for two reasons: for the way it rejects to sugar-coat the conflict's brutality (which could be perceived as a critique on colonizers); and for witnessing the screen presence of beautiful 13 year old amateur actress Susanna Mekhralieva (her placid face could annihilate all the murderous, evil thoughts).

Flamboyant Russian army sergeant Sacha (Oleg Menshikov) and a new army recruit Vanya (Sergei Bodrov Jr.) along with other Russian soldiers cruise through Caucasus region in a tank. The small group is ambushed by local rebels. In an ensuing, not-so-well staged gun fight sequence Sacha and Vanya are taken as prisoners by rebels. Normally they would also be killed at gunpoint, but their capture is meant to be used as bargaining tool by the village patriarch Abdoul-Mourat (Jemal Sikharulidze). He wants to exchange the two Russian soldiers for his son, who is held in the nearby Russian camp. Sacha is an abrasive man looking for the right moment to cut out their captor’s throat, while Vanya reaches out to the people and is enamored by the place & its culture. Vanya, the military novice, also develops a mutual friendship with village patriarch’s young daughter Dina (Susanna Mekhralieva). Although the broad strokes of the plot seem predictable, director Bodrov imbues little details that thrive in an unpredictable manner. 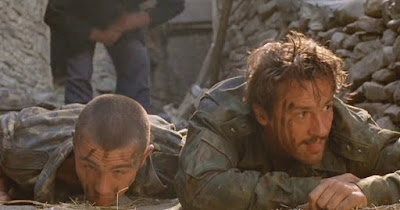 The two Russian prisoners are held in a livestock barn and watched over by old villager, whose tongue was cut out by the Russian soldiers. The exchange between Russian soldiers and the villager moves with a light sense of humor. It seems like both the parties have warmed up to each other, but then comes an unpredictable moment where we are proven wrong. In another scene, the Russian soldiers observe the village men’s party, when suddenly young Vanya is ordered to fight with a local champion – a big, boisterous fellow. The little moment that ensues next isn’t what we expect to happen. There are many such significant as well as insignificant details that keep up our interest in the narrative despite the predictable framework. Director/writer Sergei Bodrov and co-writer Arif Aliev are highly critical the colonizing stance of the Russians in Caucasus region (Bodrov never clearly states that his film is about Chechnyan rebellion). The villagers are often represented as ‘bandits’, ‘non-Russians’, etc. Sacha and other high command Russian soldiers repeatedly warn about the violent, savagery attitude of Chechen community, while the Russians perpetually inflict all sorts of violence on the people. It is a common trait among all the colonizers to instill false, negative traits upon the colonized subjects. This misconstrued negative identity is what feeds off the enmity. The stark contrast in the final activities of Sacha and Abdul-Murat closely scrutinizes these false identities created by colonizer. 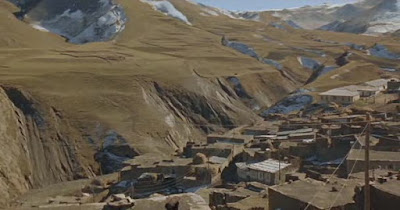 Sergei Bodrov first introduces us the peaceful, mountainous village in wide-shots and at times offers brief glimpses of the local cultures. The framing of Russian soldiers, their tanks and weapons often represents the negative impact it has created in the villagers’ way of life. Abdul Murat’s quest to win back his son is depicted as a last resort. Here, Abdul uses the same violence of his colonizer to make them understand. The little subplot involving Mamed, a Chechen working as police officer for the Russians, and his father talks about the conflict of a different kind: one between colonized subject and the opposer. The disconnect existing between Vanya and Sacha’s Russian identity is also subtly depicted. Vanya feels no connection with the colonizing ideology and at some point tells his dream about coming back to the same place, but not as a captor. Sacha simply comments“This is war. We have to kill all of them”. The way Sacha bellows while shooting a gun and cries when hearing the patriotic march song speaks of his ingrained Russian identity or belief in colonizing ideas. Vanya is more humanistic and his hands are good at repairing watches or making wooden birds than holding guns. Despite such nuances, what stop “Prisoner of the Mountains” from being a great movie is its erratic tone and the aforementioned broad, predictable framework. Nevertheless, it is highly recommended for its celebration of compassion over brutality. The other significant reason to watch the film is for its casually rendered performances. Sergei Bodrov Jr. offers a very natural and relaxed performance as Vanya. He went onto offer fantastic lead performance in Aleksey Balabanov’s “Brat”, but unfortunately died on an avalanche accident in 2002. The non-professional village actors don’t give any false moment in their performances. The girl Susanna, in her only movie role, exudes an alluring innocence that sticks with us long after watching the movie. 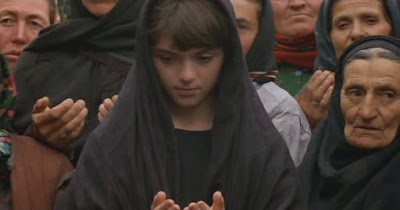 “Prisoner of the Mountains” (99 minutes) is a well-told, bittersweet tale on ethnic hatred and conflicts. It is insightful and treats every character with compassion, unlike the grandiose as well as hollow American propaganda pictures.

at June 16, 2016
Email ThisBlogThis!Share to TwitterShare to FacebookShare to Pinterest
Labels: Russian Cinema