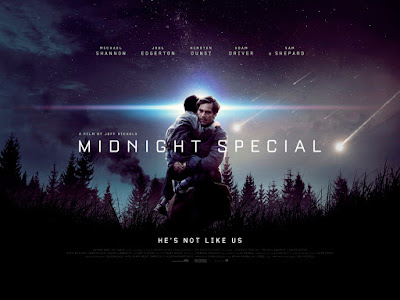 It's around midnight at Fort Worth, Texas and a local TV station is broadcasting news about a recent ‘Amber alert’ aka child abduction emergency. The abducted child’s name is Alton Meyer (Jaeden Lieberher). There’s a shot of door’s taped up peep-hole, which is revealed to be a motel room, where all the windows are covered with duct-tapes. One man is looking at the news report and sees his name as the suspected abductee – Roy Tomlin (Michael Shannon). The other man named Lucas (Joel Edgerton) says ‘it’s time’. The news report also informs that the abductees could be armed and should be considered extremely dangerous.  In between the two beds, we see a kid on the floor, covered in a white bed-sheet, reading something with a flash-light on. After lifting the bed-sheet and removing the boy's big earmuffs, Roy with a distressed smile on his face says ‘It’s time, you ready?’ The boy is Alton and the calm look on his face makes us wonder if he had really been abducted. The other instant question in our mind will be: Why is this kid wearing goggles? The trio get into the car (1972 Chevrolet Chevelle), while the motel’s receptionist watches them, thinking about the news report on TV. Lucas drives and the  crackling voice from radio police scanner comes alive, passing the information about men driving in ‘Chevrolet Chevelle’. Lucas immediately turns off the headlight, wears night goggles and asks Alton to kill the flashlight (which he is using to read ‘Superman’ comics). A turbulent sound design mixes with a pulsating musical score, the car blasts through the darkness and mystery enshrouds us. Jeff Nichols’ sci-fi drama “Midnight Special” (2016) opens in this terrific fashion, driving in a gripping tone into the first 4 minutes of movie. The opening is like a lesson for any young film-maker on how to setup an engrossing mood & tension through economically limited mode of visual storytelling.

Yes, “Midnight Special” is not the best work of Jeff Nichols. It’s distinct identity gradually wanes away and the less dynamic script doesn’t help a bit in the second-half to gain narrative momentum. But, I enjoy watching Nichols’ movies. His crafty storytelling methods use a simple, earthy tone to amalgamate uncertainties. Nichols’ revenge tragedy “Shotgun Stories”, emotionally devastating “Take Shelter”, and coming-of-age tale “Mud” withheld ingrained social realism to also provide space for allegorical interpretations (for ex, “Take Shelter” being an allegory for economic ruins threatening contemporary American life).  The allegorical part of “Midnight Special” isn’t as profound as the director’s previous work (could the narrative be a parable for parenthood and death?), but it works to an extent as an engaging sci-fi, chase movie. As Nichols declared “Midnight Special” is homage to nostalgia-inducing sci-fi films – from Spielberg’s “Close Encounters of Third Kind” (1977) to John Carpenter’s “Starman” (1984). Nichols diffuses his trademark moral complexity, starkness, and adds little mythic quality to make it his own version rather than being a mere emulation.

In “Take Shelter”, Michael Shannon’s Curtis has visions about Earth propelling towards a violent end. But, despite the perfect showcase of Curtis’ visions there would be an uncertainty that would keep the viewers to whether or not believe in his quest. The precarious nature of “Midnight Special” is quite different. Here, the characters and we too firmly believe in the boy protagonist Alton’s visions, although we never see what it is. The mystery is in the boy’s destination and the uncertain factors that could derail their journey. When it becomes evident that Roy is Alton’s father, freeing him from the judgment-day-awaiting, arms buying, religious cult, we could see that Roy is motivated by deep feeling of guilt for leaving him. What’s Roy past? What’s his relationship with the men at religious cult? Why the child needs to be saved? Why the FBI and NSA put out a nation-wide pursuit for an 8 year old boy? What vision did the boy showed to Lucas (friend of Roy) that has made him to leave his job as state trooper and be a fugitive?  Why is the boy ultra sensitive to sunlight? What separated Roy and his wife (Kirsten Dunst)? Some questions are answered, some are left open and some answers make us scratch our head in frustration. 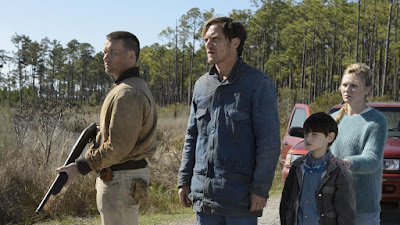 Nichols uses plenty of sci-fi tricks and neatly aligns them with a hint of surprise to give an entertaining experience for viewers. The precocious characterization of Alton reminds us of classic Spielberg characters than the pretentious shades in Shymalan or JJ Abrams’ characters. The presence of two male characters, one female and one boy is pretty much in the Spielberg territory and so are the staunch government men trying to figure out how a kid could make satellites crash out of sky. Adam Driver (a very likeable actor) as NSA analyst Paul Sevier is a trademark Spielbergian character. By the way, does the nature and deeds of Sevier is a representation of Edward Snowden? Or is Alton’s power and threat it poses for government should be construed as the persecution inflicted upon Snowden? May be there’s no hidden meaning; just my allegory-seeking mind playing tricks?

In some ways Nichols deviates from sci-fi chase movies of 80’s. For one, the director keeps the focus on Alton and Roy’s mission rather than spending time explaining the mystery behind the boy’s powers or about the shining creatures of superior world. There is couple of stark shootout which we won’t find in those more audience-friendly old movies. “Midnight Special” is at its best when it wants to be a powerful tale of paternal love. As I mentioned, all the characters exhibit a firm belief in Alton and so they are past the point of self-realization or not seeking any emotional catharsis in the journey. They are just going through the motions. The only moment of crisis evolves when Roy feels that he has let down his son, but soon he relegates to the background and his feeling of guilt propagates nothing. Shannon, Edgerton and Dunst offers a fine performance, but that lack of sharp crisis makes their character to fall flat.  The presence of religious cult also offers nothing except to serve as stage for commence the journey. Nichols’ choice to design a whopping end was neither distinct nor attractive. It was like taking a bumpy but enjoyable ride to only reach at a destination that’s annoyingly bland. However, I liked the final ambiguous moment when Roy stares into sunlight with those ‘wonderful’ eyes and smiles.

Among all the misfiring elements in “Midnight Special”, I feel it is an allegory for unbridled parental love (although I first thought that it is a parable for faith). Not just the one between Jesus, Joseph and Mary, but parental love in general. It is about the heart-wrenching feeling a parent withholds when the child gradually separates from them while entering the adulthood. It is about the constant worrying the parent has for the child, although he/she becomes a grown-up. There’s a beautiful moment when kid Alton says to his father ‘you don’t have to worry about me’, to which Roy replies ‘I will always worry about you, that’s the deal’. Those lines effectively sum up the layer beneath the sci-fi tale. Apart from the derived images at climax, Nichols has imbued an energetic style with flawless execution. He has finely evolving into a master in churning out moody and brooding atmosphere.

“Midnight Special” (111 minutes) creates excellent dramatic tension with minimal visual frills. It isn’t the profoundly layered, ingenious entertainment I expected it to be, but still it is entertaining enough.