Marguerite [2015] – An Operatic Flourish of a Dissonant Voice 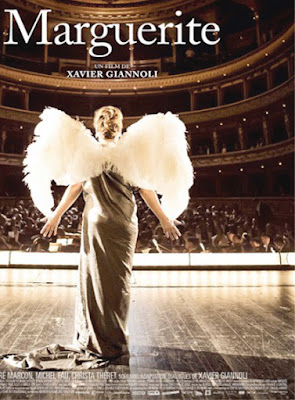 Life is so tragic and painful at times. To find a way out of those tribulations we seek to find out who we are and what we want. It leads us to possess a dream. A dream which could be merely about amassing materials or it could be about sharing our artistic talent with others. The dream of creating a majestic art may bring some respite to our lives. But, what if we don’t have the talent to create that particular form of art? We either learn the truth, choose to move on or else we plant ourselves among group of acquaintances who can spawn lies & illusions to relentlessly pursue the dream. One day, when those illusions shatter life could be more painful. In this digital era, we do come across many lackadaisical individuals, claiming to have scaled the upper echelons of art. They have their own big or small private circles to keep them cocooned forever in that fantasy-land. Marguerite Dumont boasts a dream to be a great opera singer, although her terrible, off-pitch vocalizing only incites ridiculing laughter. But, people belonging to Marguerite’s social environment suppresses their laugh and actually tell the opposite (that she is the greatest opera singer). Now our Marguerite doesn’t belong to the highly narcissist, attention-seeking social media era, but the 1920’s. Nevertheless, her immense wealth (she is a baroness) and pleasant disposition doesn’t give anyone the nerve to speak truth.

The fictional Marguerite Dumont in French film-maker Xavier Giannoli’s “Marguerite” (2015) was actually inspired by real life American Socialite Florence Foster Jenkins (1868-1944) who for years performed private recitals among wealthy friends (she made public debut at Carnegie Hall in 1944, only to receive dire reviews). Giannoli changes the 1940’s America to 1920’s France and brought pitch-perfect actress Catherine Frot to play the central delusional baroness. An official biopic of Foster Jenkins would release later this year with Meryl Streep playing the central role, directed by Stephen Frears. I am a little skeptical about biopics (especially the ones having Streep in the lead role), but what I liked about director Giannoli approach is how he offers Marguerite’s personal point of view rather than the box-ticking, fictionalization of Jenkins. Of course, “Marguerite” isn’t totally devoid of clichés, but by diffusing universal & easily relatable themes in the tale, Giannoli is able to transcend the inherent flaws. 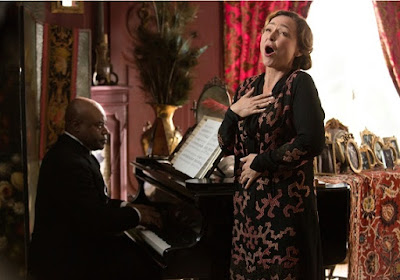 The film (divided into five chapters) opens at Marguerite’s chateau where all the aristocrat music lovers have gathered as usual to hear the middle-aged, tone-deaf diva. The private recital has also been used to raise charity money for children orphaned by war (World War I). While the guests are eyeing at the sumptuous dishes & drinks on display, Marguerite waltzes into the spacious saloon, cloaked in lavish dress and a peacock feather adorning at the top. Those who are hearing her ear-splitting off-key notes for the first time are naturally shocked, whereas the usual guest hold-back the chuckles and wait for it to end. Marguerite searches for her husband Georges (Andre Marcon) who stands in the middle of road, damaging little parts in the vehicle in an effort to not see Marguerite humiliate herself. The philandering Georges have no money of his own and hate his inability to tell the truth to Marguerite. The next day she receives plenty of flowers from friends for the ‘great’ performance and even a glowing review in the newspaper. Georges wonders what the newspaper critic wants to gain from her. 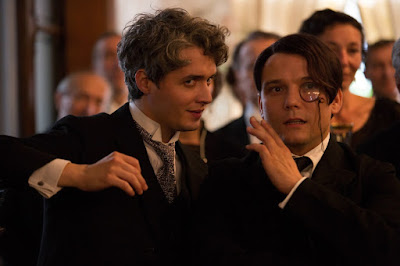 Loyal servant Madelbos (Denis Mpunga) gives power to Marguerite’s drive (he creates the alleged adoration for her performances). Madelbos reminds us of the character Max (played by Eric Von Stroheim), who fulfilled Norma Desmond’s fantasy in “Sunset Blvd.”. But unlike Norma, Marguerite isn’t pursuing her dream to be an opera singer just for fame; she also yearns for love and recognition from her aloof husband Georges. Lucien and his anarchist, Dadaist friend Kyril’s praise enlarge Marguerite’s bubble of obliviousness. She decides to give a genuine public recital in a big opera house. The prospects make Georges restless, wondering how to get past Marguerite’s sweet nature to tell the hard truth (that she will be laughed off). However, Lucien brings in flamboyant, fading opera star Pezzini (Michel Fau), who for a desperate buck, agrees to take her as a student. Things take a different turn (a bit disconcerting) as Marguerite happily walks into the stage to sing in the spirit of art.

Director/writer Giannoli could have easily taken a farcical route to turn Marguerite’s pursuit into a comedy, but he chooses to be utmost sincere and empathetic in approaching the material. There’s dry comic relief in the manner Madelbos tries to preserve the illusion around Marguerite (by employing bribery, blackmail, etc), although for the most part Giannoli explores how one person’s reasoning gradually cease to exist when he/she is deeply bewitched by art and falsely encouraged by their peers. Through the minor character of gifted singer Hazel, the director showcases the pure transcendence art could bring to soul, which in turn could be related with Marguerite’s own desire for transcendence. By finishing some of the chapters with the shots of Hazel’s beautiful singing, Giannoli is able to ruminate upon Marguerite inevitable fate. Since the director takes an intimate view point of the central character, enough dramatic tension, dreading the moment she will learn the truth. Apart from the eccentricity, the film depicts Marguerite’s penchant for freedom & rebellion. In fact, if we could see beyond her talent-less nature, we could observe that this is a tale about a moneyed woman, who seeks control over her own life. She wants to break free from her constraining circle, in the pursuit of both dream & love. 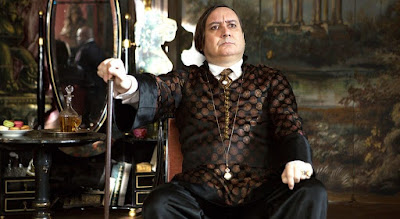 Catherine Frot’s part delightful & part heart-breaking performance elegantly carries us through the narrative’s rough patches & jarring tonal shifts (the length could be heavily felt). Consider the scene she silently listens to opera performance, enjoying or savoring the moment. Frot takes us deeply into the aspirations of Marguerite that it’s so hard to laugh at her failings or ignorance (we laugh with her, not at her). The narrative would have fallen flat if not for Frot’s flawless ability to gain our empathy. Two of my other favorite performances belong to Dennis Mpunga and Michel Fau. Fau, playing Pezzini doesn’t reduce the character into comic caricature. We are also able to see his profound love for music and his power to grasp Marguerite yearning for a transcendental experience.

“Marguerite” (129 minutes) rejects mockery to earnestly understand the warped dreams of an inept soul. The uncomfortable aspects in tell something unpleasant (hard truths) to someone face-to-face (or even to a mobile screen) is a very relevant theme for our generation too.

at June 02, 2016
Email ThisBlogThis!Share to TwitterShare to FacebookShare to Pinterest
Labels: Based on True Story