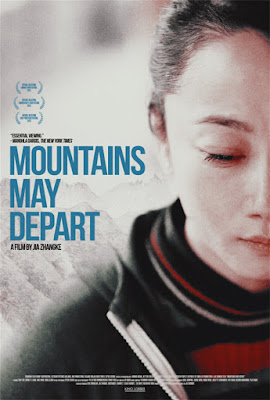 Ambitious Chinese film-maker Jia Zhangke’s “Mountains May Depart” opens with a high-angle long shot of what looks like a dance club. A group of young Chinese men and women are exuberantly dancing to the tune of “Go West” (Petshop boys’ version) as the camera zooms in slowly. The song promises a bright future, a new beginning; to be ‘together’ in a glorious consumerist, western capitalist society. The camera then zeroes-in on the central character Shen Tao (Zhao Tao), a fresh-faced independent woman, leading the dance celebrations. It is 1999 spring and the nation is celebrating the birth of new Chinese year. Consumerism, materialism, and thriving globalization have brought vigor to the Chinese culture and are subsequently and gradually followed by the growing disparity between poor and rich.

The self-confident, scooter-riding Tao (from small inland Chinese town) is pursuing the modernization, keeping her Chinese identity intact. Her comfort in the ‘west’ only multiplies her feelings of love and innocence. She is surrounded by twin poles of men: childhood friend Liangzi (Liang Jin Dong), a worker in a local coal mine; and Jinsheng (Zhang Yi), a rising capitalist. Both men love Tao. Liangzi is a soft-natured guy, whose future looks shaky due to job insecurity. Jinsheng is a crankier, aggressive guy, who’s interested in showing off his new status symbol – a red Volkswagen Jetta. May be Tao loves Liangzi, as he is her close friend and seems like her kindred spirit. But, Tao can’t dismiss Jinsheng’s raising status and the ‘joyful’, materialistic life he could offer. While showcasing Tao’s dilemma or pain of losing one for another, director Zhangke keeps the camera fixed on Zhao Tao’s empathy-generating, bereaved face. 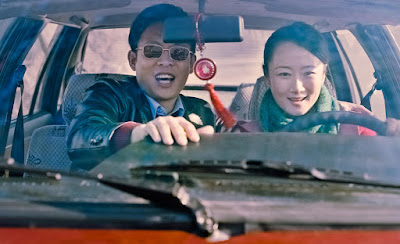 Eventually, guided by the new way of thinking she chooses the ‘right’ man for her, and the director’s execution is flawless that we won’t judge Tao for her decision. Tao regrets deeply when Liangzi leaves the town forever to be a migrant worker. She marries Jinsheng and few years later give birth to a son, whom Jinsheng insists to be named ‘Dollar’. Up to that point, the movie is shot in 4:3 aspect ratio, and the first 45 or so minutes seems to be just a preface for the upcoming divides between peoples living in a consumerist society (the title “Mountains May Depart” appears after the end of first act). Now it is 2014. Liangzi’s stint as a mine worker has highly affected his health. He has a family (a caring wife and a toddler son) and so decides to cast aside the old stubborn attitude, regarding the decision of never moving back to his old hometown. After the move, Liangzi meets a friend to seek some help for the medical treatment. Alas, times are not good for any working men.


Liangzi hears that Jinsheng has evolved into a big-shot, living in Shanghai and that he has divorced Tao. The expected dramatic arc, however, doesn’t happen after the meeting of old friends, Tao and Liangzi. Zhangke chooses to offer different perspective. Little later, the director broods over the displacement or disconnection of Tao’s son ‘Dollar’. This third act is set in the year 2025 and 19 year old ‘Dollar’ (Dong Zijian) is living with his free, irritable dad in Melbourne. He’s searching for his identity by learning Chinese language. He and his father communicate through ‘Google Translate’. The grand high-rise building and white, smooth interiors of the materialistic land seem as repressing as the emotionless beings inhabiting them. Dollar doesn’t remember his days spent with mother Tao and to keep his emotions intact, he develops a friendship/oedipal relationship with an divorced, older college professor Mia (Sylvia Chang). 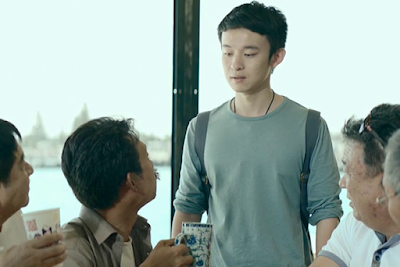 Director/writer Jia Zhangke punctuates his directorial approach with deliberately confusing details (like the falling of aircraft from nowhere) or elucidating brief moments (like the image of ‘caged tiger’ hinting at outside forces beyond one’s control). He has a wonderful eye for framing the soulless, post-industrialist Chinese landscapes or the horizontal, empty spaces. Romance in the materializing/materialized society is the central theme of “Mountains May Depart”, although there’s no particular center or established narrative arc for the movie. Jia Zhangke in an interview (to mubi.com) states how he started this project, back in early 2000’s with no script, but went onto shoot some footage (with the camera having ratio of 1:1.33). The old footage was integrated briefly in the first act and Zhangke says that was one of the reasons for opting to shoot the preface in 4:3 aspect ratio. Zhangke’s approach gives a clear picture of where his focus or attention lays. The transition happening in homeland plus the effect it has on common people is the basic layer or foundation for his works. The characters, their conflicts, and a rounded-up narrative arc become secondary to his approach. The end result is a fragmentary cinema, which should be experienced only for its ambitious themes and restrained visual style. In fact, Zhangke’s themes in “Mountains May Depart” dominate characterization and narrative that the emotional attachment is very less. In his previous movie “A Touch of Sin”, Zhangke constructed string of tales, inspired from tabloid news stories. Anger or rage set the perfect tone for dramatizing the Chinese society, spiraling down into the blood-filled dysfunction. Here, Zhangke approaches with a tone of elegy, but his unconventional flourishes either wanders into melodramatic territory or remains impossibly dry. 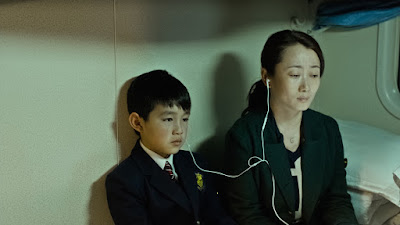 The 2025 consequence is loaded with profound meaning. It speaks of the negative consequences in a society, where humans solely take decisions based on globalized, consumerist mentality. Love and other basic human emotions or human relationships are driven by materialistic needs. It shows how money can’t save your love or bless you with new purpose in life. The experiences of young ‘Dollar’ in this segment is based upon numerous real life accounts, director Zhangke had heard from Chinese people, living overseas, totally disconnected from their identity. The other commendable aspect of this episode is how Zhangke laments for loss of identity through the loss of language; not through other decorated, hollow words like ‘race’, ‘socialism’ and ‘history’. The young Chinese people’s inability to learn their mother tongue alienates them from parents and this break down in communication even becomes a force of oppression (on the youngsters). The emotional (& sexual) awakening of ‘Dollar’ through his friendship with old tutor is a nice touch. It tells us how true feelings of love have brought up Dollar’s submerged thoughts about his birth mother, while the wealthy, confined society had made him bottle up the thoughts about mother. There might be deeper meaning, waiting to be unearthed in this episode, but at the same time this ‘future’ episode is also the emotionally uninvolving episode of the three. I don’t know if it is the performance or selection of actors or an overly melodramatic approach, my patience and attention devolved in this part of narrative. The emotions weren’t as deep as the themes.


The meandering, dis-satisfactory ‘future’ sequences also make us cherish the marvelous, tear-jerking performance of Zhao Tao (wife of Jia Zhangke). Zhao Tao perfectly embodies director Zhangke’s idea to portray change in emotions in relation to rapid rise in economic development and technologies. Like other vital characters, her character too isn’t designed in a robust manner, but Zhao Tao transcends the flaws in characterizations & narrative in those first two episodes. The mid and close up shots, covering the agony in Tao’s face keeps us interested in her plight. She makes two vital, life-changing decisions based upon freshly gained bourgeois mentality. Tao’s choice of relationship and feelings of love are dictated by her materialistic pursuit. She chooses Jinsheng over Liangzi, and in 2014 Tao is facing the consequences for that. Later, when seven year old ‘Dollar’ visits Tao, she takes a look at the boy’s wealthy, materialistic surroundings (through the pictures in iPad) and decides to sacrifice her love for the ‘well being’ of Dollar. Once again, the idea of ‘well being’ is dictated by wealth; not love. So, the misery Tao inflicts upon her is done by own choice. On further contemplation, these choices should actually make a viewer hate her or at least judge her. But, thanks to Zhao Tao and Zhangke’s restrained approach that we actually end up sharing and even relating with her misfortune. Our lonely heroine, at last walks her dog to an industrialized, snow-falling landscape and repeats the same dance moves, we witnessed at the joyous first scene. Her moves seem to balance the liveliness and inherent sadness, and it gradually became hard for me to contain the tears. Tao’s dance promises us hope, but also laments for the lost joys (due to meaningless pursuit of materials), and the (Go West) song’s lyrics calling for ‘togetherness’ in the capitalist Western land only comes off as a parody.

“Mountains May Depart” (126 minutes) is a flawed, yet fascinating feature that keeps us in a wistful, thought-provoking mood to reflect on the dire effects of consumerism on our emotions and decisions. It would have been a masterpiece, only if it was more emotionally involving.

All the best !! Different movie...