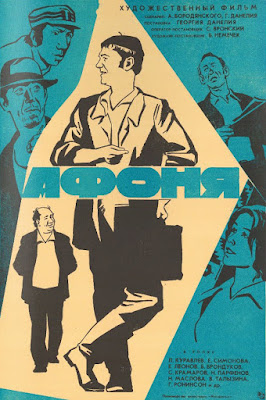 Georgian-Soviet Russian film-maker Georgiy Danelia is well regarded for his distinctive characteristic of diffusing joy and sadness with a touch of lyricism. Danelia’s protagonists are common men. His narrative focused on simple truths rather than weaving explosive moral statements. Like many auteurs of cinema, Danelia sought perfection, reworking each scene and immaculately worked on the details placed in the frame. Danelia’s 1986 satirical science-fiction Kin-Dza-Dza earned him the cult director status. Kin-Dza-Dza is an exemplary movie which would certainly trigger one’s interest in the director’s oeuvre (like it did for me). And, I have discovered little known, earlier satirical masterpieces made by Georgiy Danelia. One of my most favorite among the director’s tragicomedy is Afonya (1975). The central character in the movie is a trouble-maker with a penchant for caustic remarks. Yet, director Danelia approaches the character with enough compassion that we can see through the protagonist’s clownish-acts to reflect on his inner emptiness. It’s a simple, funny film with a tinge of sadness. Afonya also could provoke cinephiles interest to watch other great Russian comedies (The Diamond Arm, The Irony of Fate, Office Romance, etc).

Director Georgiy Danelia studied engineering, but later embraced cinematography and joined the famous Mosfilm Studios (in the late 1950s). Danelia’s 1963 film Walking the Streets of Moscow was renowned at Cannes Film Festival. In the 1969 comedy, Don’t Grieve, Danelia depicted the picturesque beauty of Georgia (known as quintessential Georgian film). The movie reminds us of Fellini’s works, especially in the way Danelia observes life with all its intermingled layers of misery and jubilation. The director’s tragicomic character study Afonya, predominantly takes place in an urban setting. Unexpectedly, the film became immensely popular with USSR audiences that it went on to become one of the highest grossing films in the Soviet Union film industry. Afanasy Nickolaevich Borschov aka A.N. Borschov aka Afonya (Leonid Kuravlyov) is a self-absorbed middle-aged guy, who works as a plumber. He has a tendency to drink excessively and imagine ideal fantasies to root out the burgeoning dissatisfaction in his mundane life. 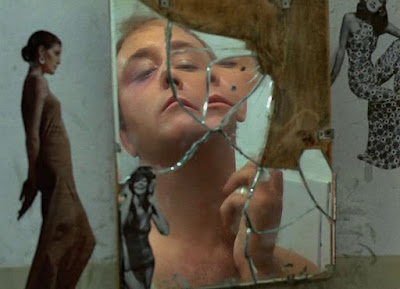 Afonya brings home his new drinking pal Kolya (Evgeniy Leonov) and is confronted by the annoyed girlfriend. She declares that she has wasted two years on him. She leaves Afonya for good, before throwing out Kolya. Afonya Borschov as usual tries to dress up his emotional bruises with overly funny and sarcastic behavior. Kolya returns back to Afonya’s apartment and request to stay there for few days, since his wife had also thrown him out. Despite the arrival of newfound pal, Afonya’s descent into darkness couldn’t be curbed. The guy’s disposition to earn tips and indifference towards solving the plumbing problems (however desperate the problem is he runs off immediately after his working time) brings couple of severe reprimands. An evening trip to have fun at a party ends up in a fight. Life seems to be slipping away from Afonya. But his acquaintance with two attractive women reinstates some hope. A young nurse named Katya (Evgeniya Simonova) is one of the women. The way Katya’s face lights up when looking at Afonya tells she has some feelings for him. Nevertheless, Afonya entrapped by his fantasies or wrong dreams stays frustrated. 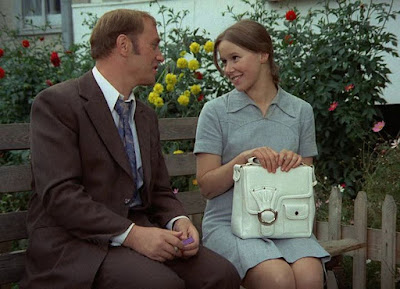 On the first look, A.N. Borschov confirms to the typecast character of good-for-nothing, cynical drinker. We expect that comedy may rise from his unsteady gait and misbehavior. But Aleksandr Borodyanskiy’s script gradually reveals the character’s depth, allowing the space for incorporating subtle social commentary. The narrative slows up a bit in these portions, but we get a profound look at his urban life with all the missed opportunities of the past. It depicts how Afonya needs the fake jolliness to stop the mudanity of city life from getting at him. This further reveals the emotionally rich life Afonya once experienced with his beloved guardian/aunt in the idyllic village. The nostalgic yearning for expansive & peaceful, rural setting as opposed to cramped urban quarters could be easily related by all those who have faced the social phenomenon of urban migration. But, writer Borodyanskiy or director Danelia doesn’t make a bland statement about the need to return to one’s roots or incriminates wider urban Soviet society for the emotional numbness. Apart from brilliantly portraying 70s USSR city life, the movie proposes the need to have right dreams and to reciprocate the true love showered on us, so as to not worry later about the lost opportunities. Director Georgiy Danelia conveys this simple, universal truth through his distinguished, poignant lyricism.

Formally, ‘Afonya’ may seem simpler (amongst Danelia’s oeuvre) compared to the visual brilliance of the movies like Kin-Dza-Dza. Nevertheless, there are many interesting visual insights to subtly reveal the protagonist’s nature and about the society he lives in. The movie opens in a theater stage as group of angelic ballet dancers carry out their rehearsals, which is disrupted by A.N. Borschov’s drinking pal (he walks to the center of stage). Borschov before trouble-shooting the plumbing problems in the theatre’s toilet walks out, remarking that his work-time is over. The guy’s mere presence seems to invoke disruption, unrest, and half-measure actions. Georgiy Danelia directs these character set-up scenes in a rapid pace and with broad humor. He employs the same dose of humor even when establishing Afonya’s kindness. For instance, the scene he allows Kolya to stay with him; only after opening the house and spending few minutes in conversation with previous night drinking friend Kolya, Borshov questions who the guy is. Borschov is also jovially generous and compassionate with Katya. Amongst the well-directed comic sequence, my favorite is Borshov’s slippage into fantasy world, where he dreams of living in idyllic rural life with a beautiful wife and sons. 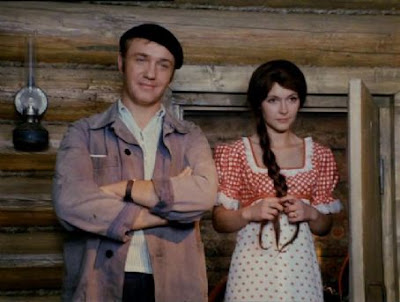 As a master craftsman, Danelia shows strict control over deciding the mood of the film. He inserts little elements or gestures to provide depth to certain simple scenes. For example, there’s a recurring establishing shot of the apartment block, where a body-builder is seen weighting lifts. This guy’s presence could be interpreted as a show of external strength, lacking genuine contentment. Even if we are in no mood for interpreting, the guy seems a strangely funny addition to the frame. The dance-hall patrons with their little quirks are also absolutely hilarious. Although the gags wane in the second-half, I liked it the best as compared to fast-moving, funny first-half.  By the time Afonya descends into regretful mood, the director allows his simple visual set-ups to fully draws us into character’s idiosyncrasies (and care for him). Afonya’s journey back to the village was brilliantly shot, which didn’t just depict vast, lush green fields, but also reflected on the guy’s unexpressed frustrations. The external beauty of the land becomes obsolete (with passing of Aunt Frosya) and it once again manifests his lack of human connection. The ending is definitely unbelievable, but I don’t have any complain about it. And, Afonya finally discovers how a genuine, little strand of human connection could cast off the possible gloominess in his life. Leonid Kuravlyov offers an astounding layered performance as the titular character, a man who boasts love/hate attitude towards human relations.  Evgenia Simonova is enchanting as the young nurse. From the graceful flirting to showcase of her desperate love, Simonova keeps us in a spell.

Afonya (88 minutes) is a simple, yet incredibly directed & performed character study of an urban dweller. It observes a common USSR citizen’s life with all its messy and happy parts. It also could serve as introductory point to explore the great works of Georgian film-maker Georgiy Danelia