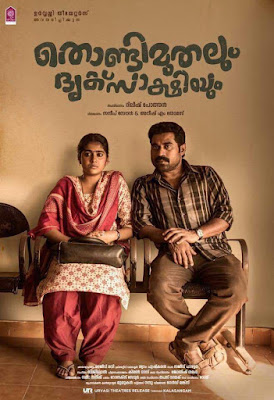 Dileesh Pothan’s spectacular crime dramedy Thondimuthalum Driksakshiyum (aka ‘The Mainour and the Witness', 2017) is knitted together with perfectly timed abruptness and potent element of realism. The film opens with a stage play, a familiar make-believe love story, which doesn’t hold the attention of one of the central characters Prasad (Suraj Venjaramoodu). He moves away from the open ground, has few drinks with the local guys, and wakes up with a cold in the morning. He doesn’t yet know what fate has in store for him, since soon like the hero of the stage play, Prasad is going to ask the girl he would woo to marry him. However, it won’t be as simple as the scenario in the stage play because in the real world there’s the troubling concern over caste and culture. Before their courtship, Prasad’s initial encounter with Sreeja (Nimisha Sajayan) is marked with distress and misunderstanding. As in Pothan’s debut feature Maheshinte Prathikaram (aka Mahesh’s Revenge, 2016) or many other small-town-set Malayalam films, the opening sequences are enlaced with a breezy liveliness, elegantly capturing the character’s idiosyncrasies and the beautiful landscape’s singularities. The evolving phase of love between Sreeja and Prasad is pretty familiar but there are some gracefully poignant and humorous touches (just an act of spitting is turned into such a hilarious moment). It’s all intertwined carefully, smartly, and affectionately and moves with depth of emotions

The fantastic script written by Mr. Sajeev Pazhoor (Syam Pushkaran co-wrote the dialogues) commences with a small, seemingly insignificant crime. But the myriad of complex dilemmas and situations that rise from this simple scenario shrewdly observes the human condition and the pitiless, overly twisted bureaucratic system. Fahadh Faasil provides yet another versatile, chameleonic performance as a petty thief, characterized with mixture of wilful charm and craftiness. After the opening courtship vignettes, the narrative abruptly moves to arid lands from the earlier profuse water-locked lands. Soon, we comprehend that the lovers have married and eloped due to heavy opposition from Sreeja’s parents (owing to caste issues). The parched land is riddled with solar panels, and Sreeja is dozing off on a moving bus. She wakes up just as the thief cuts up her wedding chain. As Sreeja immediately turns and catches him in the act, the thief swallows the chain. Prasad and the other passengers come to her rescue. However, the thief coolly maintains his innocence and the bus travels to a nearby police station. The couples are on their way to mortgage the 2-carat gold chain for digging a bore-wall in their dried-up farm land.

Although it looks like an open-and-shut case, the politics within the station and the unnecessarily convoluted bureaucratic process brings more woes to all the parties involved. Over the course of nearly two days at the police station, the simple theft of a gold chain sets off complex chain of events. The thief not only has stolen the chain, but also steals the name 'Prasad' (he has no ID on him). Gradually the material is imbued with a potential of a thriller with many unexpected yet well-judged narrative turns. Our stereotypical image of a thief, cop, and witness are constantly upended and the subsequent emotional intensity thoroughly takes us by surprise. Interestingly there are no bad guys in the narrative. Everyone from the thief to the police superior are just caught in the middle, running in circles for a solution to relieve themselves of the predicament. 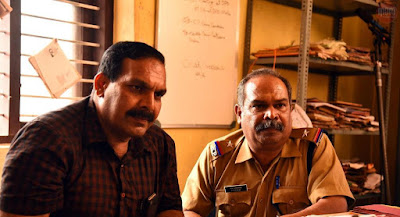 Dileesh Pothan’s creative process involved in Thondimuthalum Driksakshiyum is nothing short of astounding. The script parcels out little fascinating circumstances and exchanges within the larger narrative stretch. For example, the long, unobtrusive tracking shot that follows up the exchange between the policeman and drunkard or the old couple fretting over the absence of a big banyan tree, etc. Pothan’s impeccable, unfussy staging and Pazhoor writing keeps us keenly aware of the mild events that unfold in the backdrop. The writers and director are conscious of representing the people from different walks inside the station without affecting our attention on the main narrative. In the due process, we sometimes funnily and at times harshly learn the realities of justice system which doesn't vigorously preach the ‘message’ to the viewers (the message passing tactics are usually the habit of untalented directors and ludicrous star actors). Except for the wonderful character-artist Alencier Ley Lopez all the other characters in the police station are played by real cops. It brings a perfect authenticity to the proceedings. Particularly, I liked the mix of casualness and tension in the exchanges between the SI, CI and other lawmen which rightly captures the temperament within the station's power hierarchy (and it’s sort of amazing how the cops were comfortable in showcasing the inanities of their own departmental rules).

The film gains more profundity in the second-half as the themes of belief and trust – two things which we often find it hard to associate with police and justice system – is pondered upon. The performances are magnificent all around. Fahadh Faasil, an actor who has repeatedly proved himself adept at playing the common man, plays the thief with great panache and subtlety. Once again like Mahesh, this character seems to be a simpleton at first, but gradually Fahadh brings out the multi-layered nature of the character. There’s finesse in the way he powers through big and small dramatic moments that it never feels like watching an actor essaying a role.