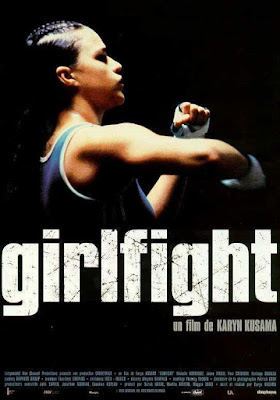 The tough-looking personality and outstanding looks of Michelle Rodriguez has pigeon-holed the actress to repeatedly play feisty characters. She confirms to Hollywood’s standard of ‘tough chick’ as opposed to ‘soft chick’.  The Fast and Furious franchise, Resident Evil franchise, Lost TV series, and Avatar provided the much-desired fame and money maintaining her place in the spotlight. But, Michelle Rodriguez commenced her acting career with a bravura performance in indie film Girlfight (2000). Directed by Karyn Kusama (The Invitation), the boxing movie with feminist gloves didn’t just gaze or ogle at Rodriguez’s physical toughness, but also provided her the space to portray the character’s vulnerabilities. The premise Karyn Kusama’s movie travels is pretty familiar, yet there’s some real freshness to this gender reversal approach.

Girlfight was backed by acclaimed American indie film-maker John Sayles (Kusama previously worked as his assistant director). It became Sundance sensation at the year of its release, winning Grand Jury Prize and Best Director Award. The then 22 year old Michelle Rodriguez gained immense praise and it led to her to enjoy big studio breaks. Despite the impressive directorial debut, Karyn Kusama’s career didn’t raise much until last year’s indie horror hit The Invitation (in the meantime, she directed couple of trashy movies: Aeon Flux & Jennifer’s body). Kusama opens Girlfight with a wonderful close-up shot of 17 year old misfit Diana Guzman. The fury that shoots up from her eyes confirms the girl’s tendency to involve in brawls, in & outside the school premises. Diana lives with her younger brother Tiny Guzman & tough alcoholic father in the impoverished, inner-city projects. Diana who is on the brink of expulsion hates the authoritarian set-up in home as well as school. Her mother had died few years before and the rebellious spirit is what helps her to counter the existential void. 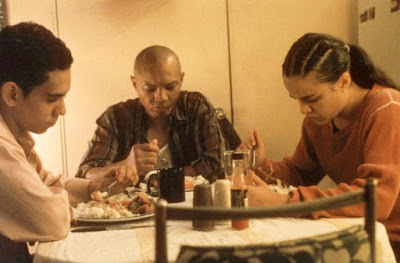 She desires to go into the world, unlike many inner-city teenagers, who before reaching the age to vote either succumb themselves to drugs or gangs. Diana walks into a rough Brooklyn gym club, where her brother and other aspiring male boxers get trained. She wants to become an amateur boxer. The veteran trainer Hector (Jaime Tirelli) and other patrons of the club says it’s not right to train a female to box. But the raw energy and attitude of Diana Guzman softens Hector’s stand. She hides her training from abusive father, who has actually driven the mother to early grave. The underdog from working class neighborhood does her best to channel her raw power to score precise blows inside the ring. Off the ring, this new pursuit becomes the means for self-control. Diana soon meets her Prince named Adrian (Santiago Douglas), a sweet guy who trains in the featherweight division to go pro. The narrative later wades into unexpected & a bit unbelievable territory with a climactic bout between two forlorn youngsters. 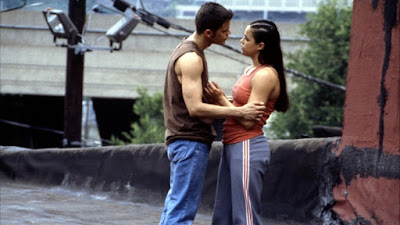 Despite following the well-established patterns of boxing flicks, there’s a very warm appeal to it. Part of the reason is director Kusama’s effective portrayal of Diana and her gritty neighborhood. The white classrooms, broken-down gym club and high-rise apartment render authenticity to the proceedings. Moreover, the director eschews elaborate set-pieces, since it's the very unglamorous setting of female amateur boxing. She avoids powerfully delivered knock-outs. The bouts are deliberately visualized in a distanced manner. Unlike the usual flow in boxing movies, Diana uses the fighting skills to control the beast within. Boxing is her way of controlling anger. ‘Power is half the story’ says trainer Hector and much of the narrative is about gaining the other-half: Self-knowledge or self-control. Diana’s relationship with Adrian seems a bit schematic, but Kusama’s intention isn’t to just depict the journey of female amateur boxer. She uses their romantic relationship and the climactic showdown to comment on the sexual politics. The director could have done away with Adrian’s character and upheld the theme of female self-reliance. Interestingly, she makes Diana to fall for the guy. Subsequently, Diana refuses to be the trophy girlfriend of Adrian; she even fights him for the trophy. It’s brings different dynamism to the romance. In the ending, when the two lovers patch up their rivalries, the scenario becomes a parable of a man learning to co-exist with a female who simply won’t succumb to the whims of macho constructs. 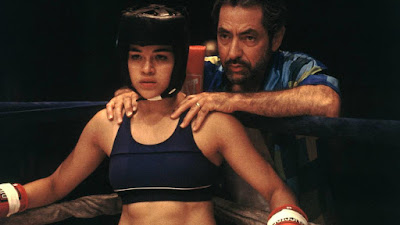 The movie, of course belongs to Michelle Rodriguez. The gorgeous actress may possess little acting chops, but she instinctively plays the character. She is inexpressive, sullen, and too self-contained in the film’s opening minutes. But, gradually as she trains to toughen up her physical strength, the emotional vulnerability elegantly escapes through the hardened facial features. Director Kusama imbues a lot of sensuality, unheard of for a boxing picture. In one superb scene, Diana kisses Adrian for the first time. Rodriguez gracefully depicts the desire rising out of the ruggedness. She gives into his kiss, and then slowly pulls back, then gives in more, but never yielding to him fully. Her impregnable shell remains intact after exuding little amounts of tenderness. In another great scene, Rodriguez’s character hugs Adrian inside the ring, to tell ‘I love you’, and then backs out to take a swing at him. Rodriguez makes us overlook the highly implausible elements of the narrative and transcends the melodrama in the material. Although the film’s scope is limited compared to Martin Scorsese’s Raging Bull or John Avildsen’s Rocky, Diana Guzman is a worthy character who deserves a place among the pantheon of cinematic boxers.