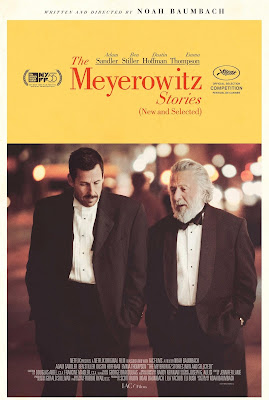 American film-maker Noah Baumbach, complimented by critics as Woody Allen’s artistic heir, once again returns back to his pet theme with his tender & well-crafted family drama The Meyerowitz Stories: New and Selected (2017): about an individual reflecting upon his own self-worth or reputation through other people’s acknowledgment. The perpetual misfortunes that are showered upon Baumbach’s characters often arise from such a yearning or deep-seated insecurity. They are capable of making great art, may splendidly philosophize on things we repeatedly overlook in life, and can see what’s wrong with the world. But Baumbach’s men & women are shortsighted in one aspect: they don’t like themselves a lot. With The Meyerowitz Stories, the director subtly delves into what’s at the root of people’s nature to undermine their self-worth: the dysfunctional family. Is there a solution for the problem? Of course, the director doesn’t throw you up concrete answers, but he nudges us up to see how some sort of solace is achieved by addressing the dysfunction. Any way, as I remember the great Leo Tolstoy’s words about ‘unhappy family’, I feel there’s something cathartic about watching unique yet fictional unhappy families.

Partly reminding us of Wes Anderson’s strange dysfunctional family in The Royal Tenenbaums (2001), the Meyerowitz family’s patriarch is the less-heralded but talented sculptor Harold Meyorowitz (Dustin Hoffman). Harold, a septuagenarian, reminds me of the older version of Jeff Daniels’ father character in Baumbach’s earlier brilliant drama ‘The Squid and the Whale’ (an achingly painful semi-autobiographical portrait about the effects of parental divorce on adolescents). Similar to Daniels’ Bernard Berkman, Harold sports a beard and has the looks of being a polite, well-learned man. But deep inside, they are just selfish, needy, and overlook life’s gifts by getting stuck at this idea of themselves. To put it simply: ‘they are pricks’. While ‘Squid and the Whale’ is about father’s inability to see the damage he is doing to his children, Meyerowitz is altogether different story; because the damage is already done here. And this brings up a dry wit to the proceedings even while the family addresses their deep-seated resentments or engages in shouting matches. 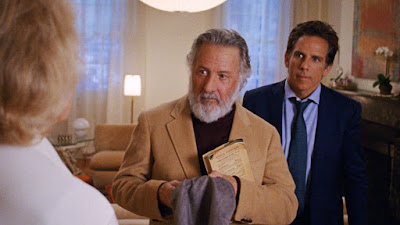 As the title promises, Baumbach serves up the Meyerowitz experience through interrelated vignettes, opening with literary-type inter-titles. The film opens with Danny Meyorowitz (Adam Sandler) and his young daughter Eliza (Grace Van Patten) visiting the sculptor father/grand-father Harold who lives in an upstate New York apartment with his current bohemian wife Maureen (Emma Thompson). Eliza is going to college to study film and Danny is going through divorce process. He hopes to stay with Dad and Maureen for a while. Danny is a genial person whose self-defeating personality has halted his ability to be a talented musician. He’s been a stay-at-home dad and feels proud of raising a smart daughter; they play piano together and the rapport and tenderness they share together is so graceful. Now that Danny’s duty of being a full-time parent has come to a screeching halt, he needs to find a job or figure out things that would liven up his existence. During an early lunch scene, where Danny’s sister Jean (Elizabeth Marvel) also visits her father, it is made clear that their embittered father has always neglected them but favored their financially successful half-brother Matthew (Ben Stiller). Despite Harold’s disregard for his elder children, Jean and Danny are more concerned with their father’s legacy as a sculptor so much as to arrange for a retrospective gallery show.

Matthew, the business manager at L.A., has grown up with Harold and mother Julia (Candice Bergen), but over the years he is also agonized by hidden ‘daddy issues’ (he chose finance over art). Harold dotes on him with unbridled affection, but Matthew still has no idea how to handle his father (who spirals down or vents out for little spiritual discomfort). The chaos that ensues when Matthew meets Harold for lunch funnily realizes how hard it is to put up with the father’s passive-aggressive behavior. Soon, a perilous health issue renders Harold unconscious; leaving his three children to confront the unfathomable hospital bureaucracy (the Meyerowitz children’ fixation on young nurse Pam is absolutely hilarious). While working together to save their dad, Danny and Matthew also confront the hatred they have for each other. Danny is so worked up about Matthew’s proposal to sell his father’s apartment and his artwork. Since, the movie deals with truth and reality of family relationships, it doesn’t succumb to the prospects of a sentimental ending. Nevertheless, beneath the complicated and messy relationships, there’s an air of hopefulness for Meyerowitzs’ (life goes-on, irrespective of the big baggage of unhappiness and disappointments). 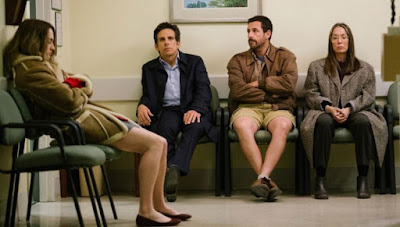 Self-deception & self-destruction are the important themes that anchor the encounters between dysfunctional family members.There’s an Altman-esque feeling in the manner the exchanges overlap each other (they talk a lot but don’t hear each other). Moreover, the abrupt cut between each vignette is intriguing, and in the case of Danny and Matthew it depicts how they are caught in a rut, unable to free themselves from the cycle of rage and despair. Noah Baumbach’s writing caliber perfectly ensures to balance the emotions of confrontation and rapprochement. From Eliza’s weirdly sexual short films to the Meyerowitzs’ desperate handling of the hospital situation, the narrative is lot nuanced as well as funny, devoid of the overwhelming quirkiness of ‘Mistress America’ and abundance of pathos in ‘While We’re Young’. The film may lack the shrewd dialogues of Frances Ha or Mistress America, but Baumbach’s realization of characters and his observation of them is much more sharper. The dialogues were written in a way that sounds very truthful and seems spontaneous when a character utters it (I particularly liked the sad moment when Danny says, “If dad’s not a great artist, that means he was just a prick.”).  Interestingly, director Baumbach doesn’t scrutinize whether Harold Meyerowitz is truly great artist or not. We see his art works fleetingly to come up with sound judgment. But the director rather concentrates how Harold has focused on being a celebrated artist that he is never acknowledged the role of a dad. He sought the validation of his artistic peers and habitually dismisses those whose works are popular.

However, Harold isn’t a failure. He has had a successful academic career alongside his artistic pursuits. The problem is Harold’s own harsh judgment of his self-worth, regardless of the things he gained in life.  The narrative is pretty much a ripple effect of Harold’s past behavior. The shadow cast by Harold’s artistic legacy and parental neglect has embroiled his children with self-doubts and distrust. Nevertheless, like his children we couldn’t totally despise Harold. Thanks to the great Dustin Hoffman’s eloquent performance, we get acquainted with Harold’s sad and longing side more than his obstinate stance. Even Marvel’s Jean, who at first seems to be just a peripheral character is blessed with a wonderful poignant scene.  Ben Stiller and Adam Sandler offer one of their career-best dramatic performances. Stiller’s Matthew brilliantly showcases the love-hate relationship with his father and is particularly remarkable in the scene he breaks-down while delivering a speech at the gallery. It’s fascinating to see Sandler subtly facing up to his emotional trauma and self-doubt. The great sequences in the film are when these two actors play each other. The tension between them is well built up that their over emotional and comic vengeful act (by vandalizing a car) provides the due cathartic moment.

Profoundly textured with 3-dimensional characters and a great ensemble, The Meyerowitz Stories (112 minutes) is a bittersweet and keenly humanistic family drama.  Oft filmed in close quarters, director Noah Baumbach thoroughly immerses us into the little sufferings and joys of the dysfunctional yet vibrant family.

I usually don't like "problematic" films, they depress me! But your review is great, it makes me feel like watching it :)