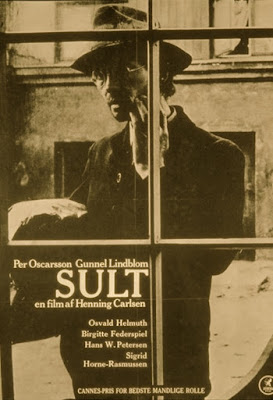 Hunger is a sensation whose pictorial representation obviously could be understood by people all over the world. Hunger can be a ticking time-bomb. The primal urge for a little piece of meat could make us shed our so-called civilized behavior. Hunger can degenerate an individual and spawn anarchist communities. In Les Miserables, Jean valjean steals a loaf of bread to feed his sister’s hungry children. An act done out of desperation which lands him with a harsh prison sentence. In cinema, the word ‘hunger’ often brings to mind the wiry frame of Charlie Chaplin’s tragicomic character ‘The Tramp’. Mr. Chaplin extracted laughs from the Tramp’s efforts to overcome hunger, yet he designed some of the most poignant scenes of hunger ever experienced in cinema. In Modern Times, ‘The Tramp’ daydreams about food freely available in the immediate vicinity; a sequence that makes us laugh instantly, while on second-thought makes us feel a little sad. I couldn’t forget Tom Joad’s ‘I’ll be there’ speech in Grapes of Wrath. The sensation of hunger was also tangibly felt through the characters in seminal masterpieces like ‘Bicycle Thieves’, ‘Seven Samurai’, ‘Pather Panchali’, etc. Amidst all these haunting portrayal of hunger in visual & literary medium, Danish director Henning Carlsen’s adaptation of Knut Hamsun’s 1890 novel ‘Hunger’ has had a great impact on me.

‘Hunger’ aka ‘Sult’ (1966) was filmed on-location in Oslo, Norway. In the period, the movie was set, Oslo was called by the name ‘Kristiania’ (from 1877 to 1925). This film also happens to be a rare co-production work between Scandinavian nations. Producers and artists of Denmark, Norway, and Sweden came together for realizing this grim portrait of a dispossessed man. Controversial author & Nobel laureate Knut Hamsun’s novel is about a struggling writer who strive to maintain dignity and pride, despite the burgeoning existential troubles. We first see protagonist Pontus’ (Per Oscarsson) gaunt figure from the back as he is leaning against the rail of a bridge. Krzysztof Komeda’s (Rosemary’s Baby) eerie musical score takes us closer to Pontus’ perceptions. The lean, bespectacled Pontus looks over the derelict apartment buildings, the gushing river water under the bridge, while scribbling away few lines on a piece of paper with a pencil. The scribbling could be the seed for a great creative endeavor or for bout of madness. The way Pontus eats the paper he has just scribbled on points us to his unforeseeable bleaker predicament. 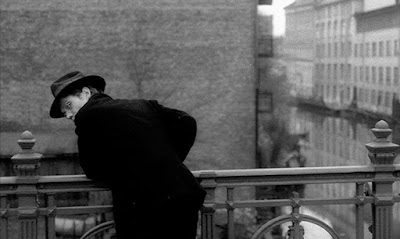 Director Henning Carlsen uses both the point-of-view shots and the distant, populace’ viewpoint shots to observe the nature of Pontus. There’s a sense of detachment in Pontus’ views and in those frames, Carlsen more or less wants viewers to understand his stricken status rather than put themselves in his shoes. In fact, for the most part the viewers take a place among Kristiania’s population to observe Pontus’ antics. Whatever the point-of-view is, Pontus is an enigma. Only one thing becomes clear in the early stages of narrative: the starvation is self-imposed and he vehemently rejects charity and pity. Pontus places his hope in an article he has written. Like the scribbling we saw in the first frames, the article could be either great or just a useless rambling. If his writing is accepted by the local editorial office, he may receive 10 kroner and a way out of poverty. He also desperately applies for a bookkeeper position in the neighborhood grocery position and stands in line for ‘fire brigade’ selection. The random people Pontus meets in his sojourn through the grimy, stone-paved street platforms suggests that he had a better life in the past. We aren’t informed about what had led to this utter desolate state. Evicted from the boarding house, he is on the look out for food and job opportunities, but as an ascetic, Pontus maintains some strict rules.

Most of Pontus’ behavior rests between absurd and baffling. He pawns his waistcoat to drop a kroner into a beggar’s hands. He often asks the time to policemen wandering around the streets; watches over the clock-tower and pretends to correct time at his non-existent pocket-watch. The obsession with the passage of time may hint at the heightening of his existential crisis, whereas the act of asking time to policemen is shown to be one of the rare occasions, when Pontus tries to forge a connection with the outside world. In a streak of absurdist humor, Pontus knocks at the doors of apartment dwellers, asking to meet persons he had conjured from his imaginative mind. He does these absurd things to contain the burgeoning madness. In other minor efforts to contain hunger, Pontus chews at a bone like an animal and day-dreams about fighting with a dog (for a juicy piece of bone); he also tastes dust and bits of paper. His growing insanity is pretty evident on the occasion he sees a pretty, bourgeois girl. Pontus follows her, uttering cheeky comments. In his imagination, she is ‘Ylajali’ (Gunnel Lindblom), a mythical, radiant feminine figure. The young woman is also intrigued by the strange-looking protagonist. In the following episodes with ‘Ylajali’, we get a closer look at Pontus’ palpable emotions. The central conflict, however, is between Pontus’ pride and the wild hunger. At one moment he yells ‘All is lost, ladies and gentlemen!’, while at another moment he is as calm as a sage. Pontus is so caught up in his inner world that reality most often swirls around him. 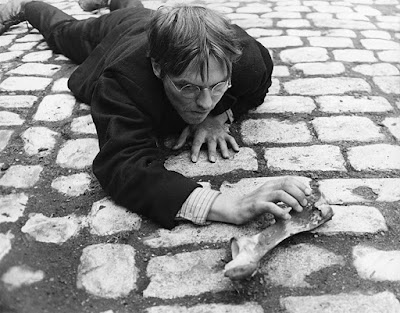 The surface and simmering emotions of Pontus couldn’t have been expertly revealed in the frames, if not for Per Oscarsson’s majestic performance (won the best actor award at Cannes). It’s a very demanding performance for Oscarsson (he is there on every scene), who captures polarizing emotions of pride and craving, hope and disappointment within little fleeting moments. The actor is particularly at his best in the bittersweet rendezvous with ‘Ylajali’ at her posh house. In the early moments, Oscarsson’s Pontus remains as an odd figure, but when we gradually immerse ourselves in his world, an emotional resonance is strongly forged. His performance has the silent power to slowly grow upon us in the repeat viewings. From a formalistic point-of-view, Carlsen’s imagery is a wonder and thoroughly intriguing. The uncontrollable urges reflected in the day-dreams are brilliantly visualized; the brightened frames suggesting Pontus' twisted sense of self-importance. The recreation of old Kristiania and its populace pretty much evoke a neo-realist setting. Yet, the distinct Scandinavian brand of mordant humor or absurdism separates the film from Italian neo-realism cinema. Furthermore, Carlsen’s quirky zoom-ins and intimate observation of Pontus’ physical and emotional spasms imbues an equally scarring movie experience on the viewers.

Although Knut Hamsun’s novel was written at the end of 19th century, the general apathetic nature of the populace could also well resonate with today’s technological-savvy urbanites. People are so consumed by silly conflicts and material desires that they are so unconcerned about the humans around them. We need a little suspension of disbelief to accept that the good-looking upper-class girl has taken a shine to derelict, homeless person (with rotten teeth). Yet, the inevitable path to their doomed romance is pretty clear. They both are stuck in the bubble of lust rather than standing on the common platform of love. This nature of self-absorption is often closely scrutinized (like in a scene when children playfully torture a helpless old man just for fun). In the narrative, the characters are often caught in their own world that they can’t lend helping hand to fellow humans. Pontus simply strives to break those invisible barriers or restrictions. Ironically, Pontus is also very much stuck in his inner world. By keeping up outward appearances, and politely wishing the strangers (by removing his hat), he also tries to maintain a false sense of civility.  But, Pontus’ inner world is mostly designed of imagination and passion than constricted, egotistic point-of-views.  However, the hunger combined with existential agonies turns his imagination into hallucination or rampant madness. So, in the end Pontus is left to take the only path available to him. In fact, all seems to be ‘lost’ for the artist, who chooses pride and isolation over the urge to satiate different kinds of appetites. 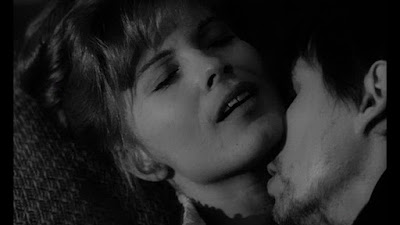 Hunger aka Sult (112 minutes) is a must watch film for lovers of serious, contemplative art-house cinema. The sensation of ‘hunger’ lingering in each & every frames of the narrative would leave a powerful, everlasting impact on cinephiles. It’s one of the best, profound character studies ever made, worthy enough to be in the league of Robert Bresson or Ingmar Bergman’s masterpieces.