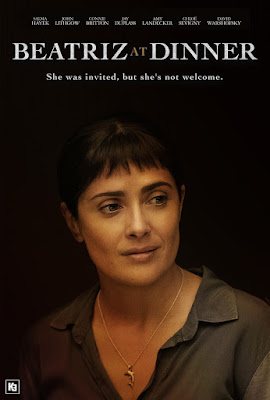 A dinner table has often proven to be a riveting dramatic setting for film-makers working on shoe-string budgets. From chamber thrillers to low-key philosophy-mumbling dramas, semi-formal dinner parties could elicit spectacular clash of ideas. Director Miguel Arteta and writer Mike White’s quasi-satirical drama Beatriz at Dinner (2017) uses the dinner party excuse to pit a conscientious, hard-working ethical immigrant against a table full of nauseatingly rich people who perfectly fits the definition of ‘obnoxious one-percenters’. Arteta and White’s previous creative collaboration includes pitch-black indie comedy Chuck &Buck (2000) and the reasonably good 2002 dramedy The Good Girl (Jennifer Aniston delivers one of her best performances). Both the films are comedy of manners with an incisive tragic layer attached to it. The writer-director’s third collaboration is designed as a mordant allegory of Trump-era politics, but the incoherent script and on-the-nose social commentary stops it from fully harvesting the ingenuity of the setting. Nevertheless, the end result is definitely watchable, powered by Salma Hayek’s intuitive performance.

The film opens with Beatriz’s (Salma Hayek) dream of the mangrove swamps in her small town which is supposedly destroyed by the real-estate developers. She alarmingly wakes to the bleating sound of her goat, enclosed in a pen within the bedroom. Beatriz lives in Altadena, California amidst her pet goat and dogs. Buddha and Virgin Mary decorate her car dashboard and rear-view mirror respectively. The first few minutes traces Beatriz’s routine which involves working at alternative clinic that treats cancer and other terminal disease patients. Beatriz is a massage therapist, spiritual healer, and a truly empathetic person. An emotion of hurt and pain passes over her face while seeing cancer-afflicted patients or gazing at the billowing smokestacks or while noticing the patch of oil scarring the glorious view of Pacific Ocean. She almost comes off as a saint, until she visits her long-time rich private client Kathy (Connie Britton). Kathy lives in a high-end luxurious gated-community of Newport Beach with her insensate husband Grant (David Warshofsky). Beatriz has helped Kathy’s 15 year old daughter to survive from the agonies of cancer and exhaustion of chemotherapy.  Now the girl is doing her college and Kathy considers Beatriz as ‘part of the family’. On this particular day, the wealthy couple is hosting a small dinner party to celebrate the success of major land development. Kathy has requested a rub-down to freshen-up for the upcoming party. 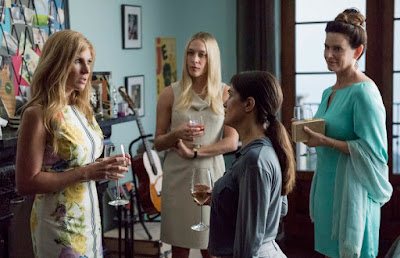 During the massage session, Beatriz reveals how, despite the saint-like posture, her life isn’t exactly ideal. It’s been a long time since she is displaced from her picturesque Mexican small town. Although she isn’t blessed with a human companion, she finds solace in tending her animals. But recently Beatriz’s beloved goat has been killed by a bullying neighbor. Later, when her car breaks down, Kathy immediately invites Beatriz to stay for dinner, pleading the insolent husband to place 'the healer' at dinner table of moneyed people. First to arrive is young power-hungry couple: Alex (Jay Duplass) and Shannon (Chloe Sevigny). Before conversing with the couple, Beatriz hugs them trying to establish a soulful connection. While Beatriz raves about holistic healing, the couple hijacks the conversation with their slightly patronizing comments. Then the important guest of honor arrives: loutish, Trumpian land encroacher Doug Strutt (John Lithgow) with his wife Jeana (Amy Landecker). Beatriz's initial efforts to engage in conversation with the women leads to simple comic situations, the comedy is in witnessing Salma Hayek’s bewildering looks. Beatriz talks of elemental energies, whereas the other ladies fervently gossip about the leaked nudes of a reality TV star. The narrative turns into social drama territory when Doug demands a drink from Beatriz, assuming she was ‘part of the staff’. After the formal introduction, Doug’s irritable behavior towards Beatriz doesn’t necessarily cool off. And, the dinner only gets heated-up by their uncomfortable verbal exchanges. 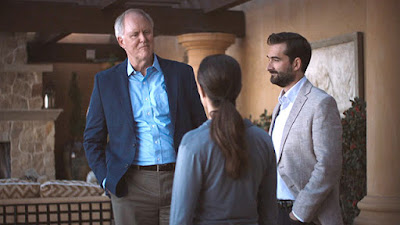 Salma Hayek relishes the chance of playing an unglamorous, odd-one-out character. Her Beatriz doesn’t believe in empty exchanges and frustrating societal niceties. She just wants to talk about authentic human feelings or nature and animals, while the myopic view of the rich guests & hosts desires the prospects of acquisitions, mergers and debauched memoirs. Hayek’s internal performance brilliantly conveys this conflict of interest. Although some dialogues come off as preachy, Hayek convincingly delivers the words, inciting us to root for her righteous fury. I feel that none of the characters are profoundly shaped. The problem is their broadly emphasized, dichotomized stance (healer vs destroyers). If not for the excellent ensemble (John Lithgow is effective as unrepentant one-percenter), the characters would be more of one-note personalities than what they are in the reasonably better final product (the performances doesn’t entirely transcend their caricatured portrayal but it’s sobering enough to keep us engrossed).

Arteta’s intense frames ably immerse us deep into Beatriz’s feelings of unease. Wyatt Garfield’s cinematography, despite the largeness of the mansion, instills a sense of claustrophobia. Even Beatriz’s brief sojourn outside the house or to the tow-truck brings a sense of relief. Mike White’s script sharply addresses the casual, fine-tuned showcase of racism and white supremacy. The rift between accepted social behavior and morality leads to certain interesting observations (for example, Doug’s bragging about his upsurge of primal blood-lust). Furthermore, the moments like when Doug peevishly questions Beatriz’ place in racial ladder (“Where are you ‘really’ from?”) cuts a little deeper than the blunt environmental & political commentary that tinges the later part of the narrative. The vignettes of verbal encounters puts Beatriz in a truly overwhelming position, but her ultimate disentanglement from this position was wholly dissatisfying.

Within a lean running time of 82 minutes, Beatriz at Dinner definitely posits plenty of intriguing moments and affecting performances. Perhaps it could have been a sharper social satire, if the occasional sermonizing tone and the incoherent denouement are done away with.