The Orphanage -- The Stealth of Creepy Children 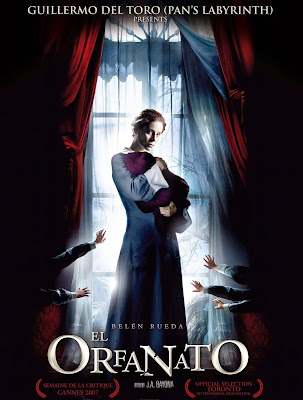 Presented by Guillermo del Toro and directed by Juan AntonioBayona, the Spanish crisp horror “The Orphanage” (“El Orfanato”, 2007) proceeds down a unusual path in a classical horror style. Like Del Toro’s “Pans Labyrinth”, Bayona’s film has the same ardor for the curiously romantic and fantastical view of terror. In the elegant mood, the movie resembles the tone of “The Others” (2001) and “Devil’s Backbone.” There’s influence of many European art house horror movies and also pays respectful nods to classic spine-chillers like “Psycho”, “Rosemary’s Baby”, “Innocents.” However, Bayona’s nuanced style makes the movie to look fresh, devoid of the cheap tricks of pop video horror.

The film starts with a prologue, where a group of children are merrily playing tag. Behind them lay a Gothic, Victorian stone mansion, which is used as an orphanage. A 7 year old girl is facing the tree and her friends are closing in on her, but little do they know that their favorite friend is going to depart (she is adopted). Now the story is fast-forwarded to thirty years. The 7 year old girl Laura (Belen Rueda), now a nurse, returns to the abandoned orphanage where she grew up. Her husband is a doctor -- Carlos (Fernando Cayo) and they have adopted a son Simón (RogerPríncep). Their reason for purchasing this big mansion is to turn it into a home for children with special needs. 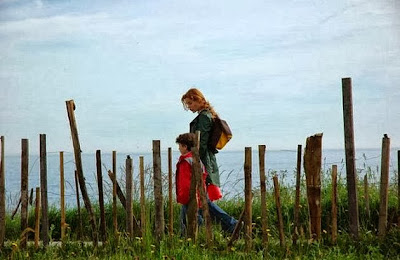 Like the boy in “Shining” Simon makes friends. But, they can’t be seen by his parents. He calls his imaginary friends by the names Watson and Pepe. Simon is tested HIV-positive and takes drugs every day. Soon, strange things begin to happen. A strange, sinister lady walks the grounds of mansion. Simon and Laura explore a seaside cave near the orphanage and Simon gets acquainted with a third friend Tomas. Few days later, Simon disappears. The dismayed couples seek the help of police but they couldn’t find a hint of his disappearance. The police believe that Simon is dead, since he can’t live longer without the drug intake. Six months later, Laura is visited by medium (Geraldine Chaplin), whose words make her take a spooky inward detour, 30 years before.

“The Orphanage” has many unsettling moments rather than genuine frightening moments: the creepy masked figure; odd apparitions; childish teetering and strange noises. These things increase the story’s tension and mystery level, instead of giving us spooky moments, then and there.  Of course, on the hands of a lazy film-maker all these elements would be turned into cliches, but director Bayona understands craft, performance and atmosphere of a horror flick and rolls it slowly down the steps towards audiences’ fears.  Isolated, gargantuan mansion with groaning staircases are not new incredible ideas but the mood established is perfectly lacquered with fear. 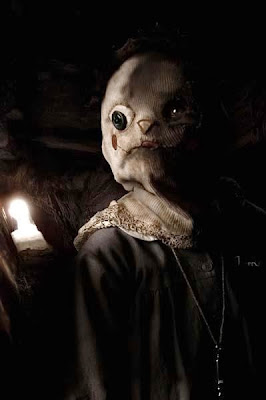 Isolation is one of the main subtext in this Spanish frightener. Like del Toro’s, Sergio G. Sanchez’s script is also connected to history (like World War II or Civil War), which suggests that atrocious events can happen when no one is looking. The forgotten or isolated children of this film are all from an era, where matters are hermetically sealed. Unlike, the Oscar winning “Pans Labyrinth”, “Orphanage” isn’t without flaws. Towards the end, the film tries hard to stay within the genre and makes a loophole or two on its way.

Sanchez’s script moves from one suspenseful set piece to the next. He swiftly alternates the script from ghost story to crime procedural, consistently bringing up the emotional quotient. Bayona’s widescreen framing and merry-go-around camera movements display a visual elegance for springing up the horror. Belen Rueda anchors the film with her riveting, emotional performance. The fraught energy she showcases is one of the reasons for the film’s scary tone.  Veteran actor Geraldine Chaplin plays the role of psychic. The sequence where she wanders, looking for the spirits is one of the most chilling scene of modern horror. There is no gore throughout the film. Much of the scariness is diffused by divergent sounds and crisp editing.

“The Orphanage” is not a suspense/horror classic, but it s a terrifyingly told story that never sags and ultimately assaults the viewer’s nerves.

Rated R for some disturbing content and violence
at October 31, 2013
Email ThisBlogThis!Share to TwitterShare to FacebookShare to Pinterest
Labels: Horror, Spanish Cinema, Thriller

Its indeed true that the movie has many unsettling moments. the old, sinister lady, the medium, the children with weird masks..... all stood out ..
Great review !!

@ gangsofedathua, thanks for the comment. Keep visiting my blog.