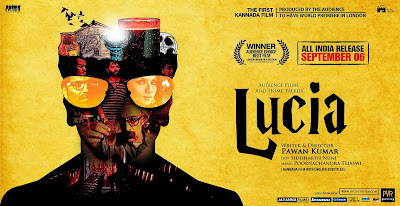 Loud and ridiculous dance numbers, maudlin and mundane story-lines. These are the elements of a typical Kannada movie. In fact, these are the basic ingredients of main-stream, mindless Indian cinema. So, when you see the words “This is the first crowd-funded Kannada film”, you can immediately assume that this is some brave, path-breaking attempt. PawanKumar’s “Lucia” (2013) starts with such a distinctive opening credit and ends as a testimony to the inventive excellence of regional Indian cinema.

Martin Scorsese said, “Movies are memories of our lifetime; we need to keep them alive.” But the problem with most of the Indian film-makers is that, they tend to think that an average Indian audience is suffering from short term memory loss, because they chuck out the same hero-worshiping flicks again and again. The mass heroes pick up a film’s producer, heroine and director (exactly in that order). The one slogan, a producer and director always chant is, “it’s a movie for all age groups.” Yeah, it’s such a ludicrous statement and that’s how they operate. Just think how frustrating it would be, if all the individuals in the world (from kids to adults) have the same dream. An Indian cinephile would have pondered over these things, but “Lucia” subtly approaches all these gimmicks to indict the sorry state of mainstream Kannada/Indian cinema.

Lucia is narrated in a non-linear pattern and revolves around the lives of two contrasting characters. Nikki (Sathish Neenasam) is a torch-bearer in a local theatre, which is located in the suburb of Bangalore.  He is a good-natured guy and is not earning much in his uncle’s (Shankranna) rundown, decrypt talkies. Shankranna is a guileless man, who only screens Kannada cinema. Nikki is suffering from insomnia. On, one of his regular nighttime stroll, he bumps into a street-drug peddler, who takes him into a strange place, where a fancy dressed dealer gives him a sleep-inducing, dream pill ‘Lucia.’


Nikki takes the pill and finds him in a movie-set. He is now a superstar and is mobbed by throngs of people. The heroines are begging for his gaze, while the press is engaged in giving him new titles. Nikki relishes in this new found dream world. He finds love with a newbie actress Shweta. The torch bearing guy also finds his true love – a waitress in a local pizza outlet – Shweta (Shruti Hariharan). Both the love life has its own issues and similarities. Nikki – the torchbearer’s and Nikki – the hero‘s thoughts and action are all intertwined.  Telling how and why would be a criminal act.

“Lucia’s” subtext and radical revelations can’t be discussed in a detailed manner, since it would mess up a viewer’s experience. Director Pawan Kumar smartly lodges his complaints on Kannada cinema. He questions the superstars that where is the friendship and love in this flock, which adorns him. Producer falling on the legs of hero and reporter; Director lurking in the background; Actresses wooing hero in real-life to get a movie chance; and finally the eccentricity of so-called fans. This really looks surrealistic and unimaginable. On the other hand, a torch bearer getting a magic pill, free of cost is also something surreal; His attempt at screening his uncle Shankranna’s unreleased film is so unreal; the romance that ensues between him and Shweta also looks cinematic. But, if you can relate all these events in accordance with the film’s climax, then everything seems perfect. An individual’s quest for starting a new life is portrayed elegantly and it comes with its own set of metaphors. Pawan Kumar takes a dig at the euthanasia and drug-marketing strategies, which looks a bit preachy.


Pawan Kumar’s visual style is influenced by auteurs like Michael Gondry (“Eternal Sunshine of the Spotless Mind”) and Darren Arfonosky (“Requiem for Dream”). He pays homage to eternal classic “Cinema Paradiso” through the relationship of the characters Shankranna and Nikki. Spanish flick “Open Your Eyes” had the concept of lucid dreaming, where the characters lose touch of reality and dream-state. But, there are no similarities in story lines. To be brief, the script is original and remains unique in its execution. A movie made on 7 million rupees (funded by 110 investors) usually has poor production values. But, this film’s production design and technicalities looks far better than a 5 crore mega-budget commercial cinema.

The part-surreal, part-naturalistic script weaves a cheerful and intriguing story to keep the audiences hooked. The romance part is a heavily main-stream and sags at times, but the riveting suspense that hangs behind this façade merits everything. Siddarth Nuni’s adroit cinematography overcomes the shortcomings. The editing looks impeccable, like Nolan’s “Memento.” The non-linear editing makes a viewer to ponder over the basic similarities between the two lives (without any confusion). All the performances are remarkable. Satish makes his debut as a leading actor. As a guy within the limelight and as a guy bearing the light, Satish exhibits a wide range of emotions. He is ably supported by Shruti both as the simple waitress and budding actress. Achuth enacting the role of Shankranna emotes with finesse and grace.


"Lucia” is a landmark Indian independent cinema. It surely deserves all the accolades and praise-worthy words. It fervently proves that you don’t need state-of-the-art special effects to make a sci-fi fantasy. You just need a unique, thought-provoking concept.

Besides if you are interested I can talk some business with you. @Kenfolios
we are offering tons of good features and opportunities for Bloggers/Writers through our writers and bloggers program. Visit Kenfolios writers and bloggers program for more details and join for your own benefit.
Kenfolios
You can contact me @ banerjeedebopam@hotmail.com for more details.
Please ignore if you are not interested.
Thank you.

well said,undoubtedly a watershed in kannada movie industry hope this brings out more creativity from other budding directors and proves all doubters wrong about kannada audience

Thanks... you Introduced a worthy kannada movie!

Indeed a landmark both finance wise, creativity wise and technology wise also, as it has been totally shot on a Cannon DSLR :)

I heard a lot about Lucia and am yet to watch it..nice review :-)

@ Arun, With whatever clarity Pawan made this complicated film, you reviewed it with equal elegance.. I was not satisified with any of the review that i saw in papers.. Your review looks complete.. COngratulations...

After watching Lucia my state is - "Naa luciadoLago? Luciya ennoLago?? :)" KUDOS to the whole team...