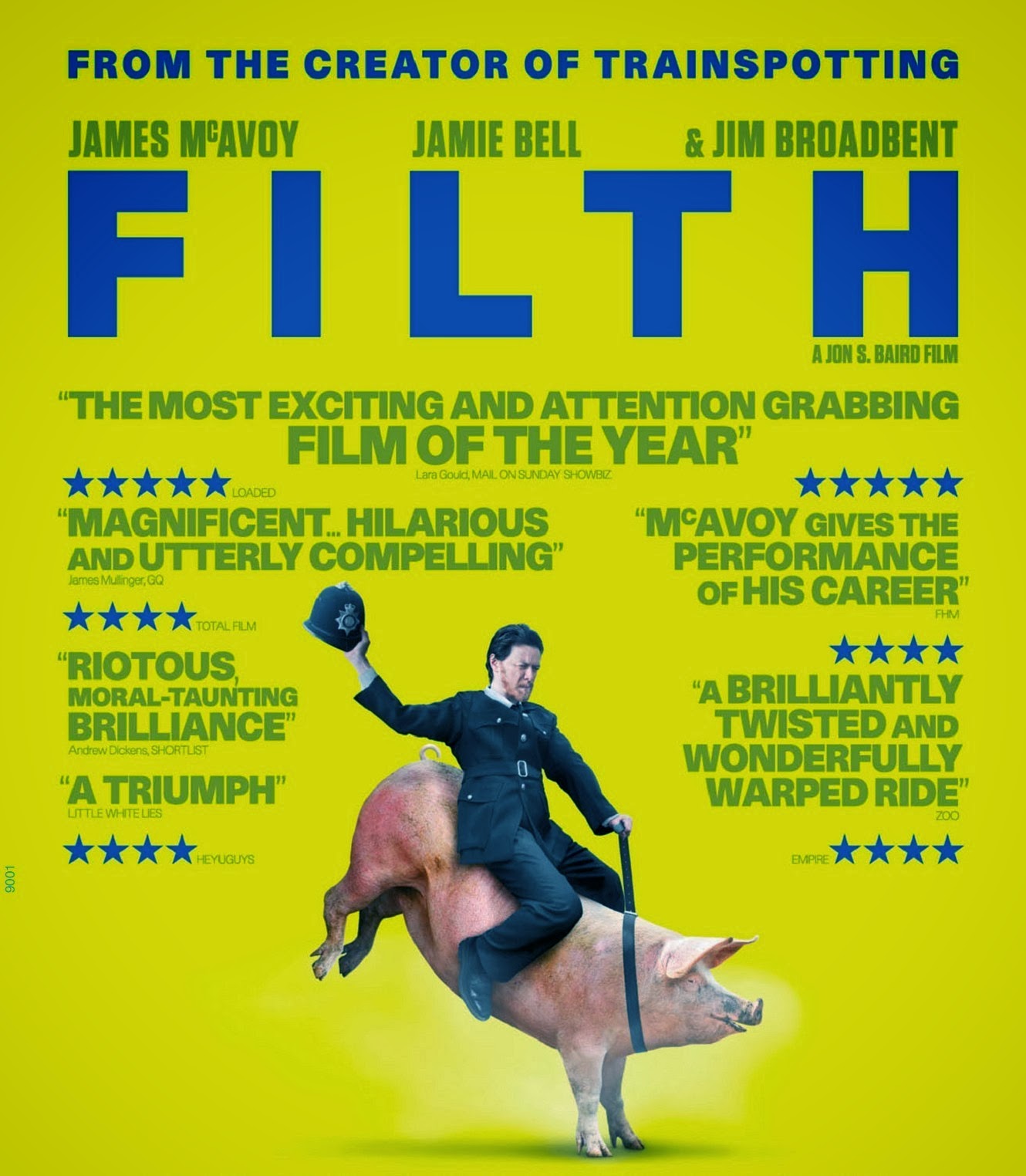 Danny Boyle’s 1996 adaptation of Irvine Welsh’s cult novel, “Trainspotting” set the benchmark for modern British cinema. Corseted women, suited men, furtive encounters, period or costume drama, posh sets have been the major traditions of British movies, whereas “Trainspotting” was loud, harsh and its humor, very very black. That junkie’s odyssey was filmed with a madcap energy and filled with lashings of Brit-pop music. Its success brought everything the Tory government kept hidden. But, sadly Welsh other novels were adapted (“The Acid House” and “Ecstasy”), in an inferior manner, struggling to escape the long shadow of Boyle’s film. Welsh’s 1998 novel “Filth” was regarded as one of his best works and also came with the label “unfilmable.” However, the novel started its slow and troubled journey to screen. Studios were mostly afraid to pursue the novel’s darker elements. But, eventually Director Jon S.Baird pulled up a team of producers (mostly European investors) and roped in ‘good guy’ actor James McAvoy, who took a pay cut for a producer’s credit.

“Filth” (2013) lives up to its title. It is an abrasive trip, full of obscenity, drug abuse and sexual exploitation. It is morally repugnant and never offers any kind of cathartic enlightenment. Like “Bad Lieutenant” (1993) and “American Psycho”, the movie offers a non-sanitized view of an anti-hero, whose madness begins as something ugly and segues into a tragedy. The movie is set around Christmas time, in Edinburgh. A Japanese student gets murdered by a group of feral thugs. A Vaseline-smeared woman, Carole (Shauna Macdonald) witnesses this crime. The narrative then cuts to Bruce Robertson (James McAvoy), who is the most crooked policeman. He is an alcoholic, drug-addict, sexist, racist and homophobic. His wife Carole and daughter Stacey has left him alone. Robertson’s favorite pastimes are blackmailing young women into having sex, making obscene phone calls. The festive and depressed moods of Robertson’s are due to his bipolar disorder. He sees a psychiatrist (Jim Boradbent) and also has hallucinatory dialogues with him in his fantasy. 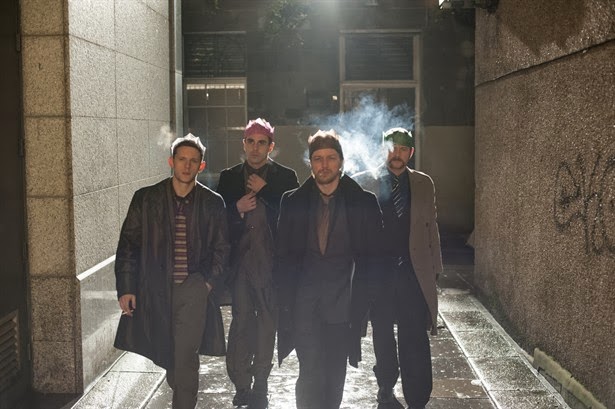 At work, he works deviously against all the colleagues. The reason is that he is up for a promotion. So, he plays dirty games with their characters. Robertson’s sidekick is the young naive Ray (Jamie Bell). The other members of his team are the metro sexual Peter (Emun Elliott), hotshot efficient investigator, Amanda (Imogen Poots), dopey, Gus (Gary Lewis). Robertson spreads homosexual rumors about Peter and Amanda, has sexual affair with Dougie Gillman's (Brian McCardie) wife (Kate Dickie). There’s also his pal, Bladesy (Eddie Marsan), a geeky, rich accountant. He abuses Bladesy’s friendship, seduces his wife and takes him on sex-and-drugs holiday to Hamburg. Yet, Robertson is capable of doing a good thing, which leads him to meet a young widow (Joanne Froggart). The filth of his past and present are clamoring his mind, while he sees a hope for future redemption through this young widow. 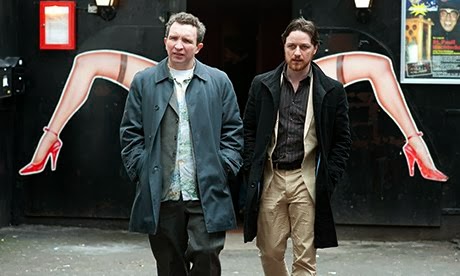 “Filth” is not a film you watch for light entertainment. So, you can’t blame Baird for its lewdness. In fact, the film-makers have shed some of the book’s vicious elements, even though there is lots of transgressive behavior and also consist of a Christmas party, where the policemen photocopy their genitals. Those who are not familiar with rapid-fire dialogue of thick Scottish accent may find the proceedings exhausting. It is hard to maintain a momentum among all these manner of extremes, but the adaptation and direction by Baird maintains a cohesive narrative to an extent. Baird doesn’t possess inventiveness like Danny Boyle. However, he is ready to try anything (like Roberson’s redemptive path) and conjures some excellent witty moments. Childhood brother, broker marriage seem like a device to connect-the-dots psychological motivation of that final twist. The twist itself is a bit ludicrous, but at least Baird shows Robertson making amends for his misdeeds, rather than basking in unrepentant glory.

James McAvoy submerges his boyish charms and good guy looks to plays this bearded, roguish, galvanizing cop. It is a rounded performance which strikes the spot-on balance between lunacy and empathy. Despite the litany of despicable acts, McAvoy draw us further and further into the character’s volatile orbit. In the end, he gives Welsh’s psychopathic copper, a tinge of pathos, which is worthy of Shakespearean.  He was also ably supported by a great supporting cast: Eddie Marsan, once again, excels in playing mild-mannered, dim-witted guy, who gravely mistakes Robertson as the most loyal friend; John Sessions is funny as the oblivious boss, with the dreams of becoming screen-writer; Jamie Bell and Gary Lewis perfectly plays the stereotypical dim-witted policemen.

“Filth” isn’t a path breaking work like “Trainspotting”, but its assured directorial tone and a powerhouse central performance makes it an enjoyable, darkly funny movie. If you have got the stomach for it, you can find some cleverness and compassion among all its hard-bitten heartlessness.