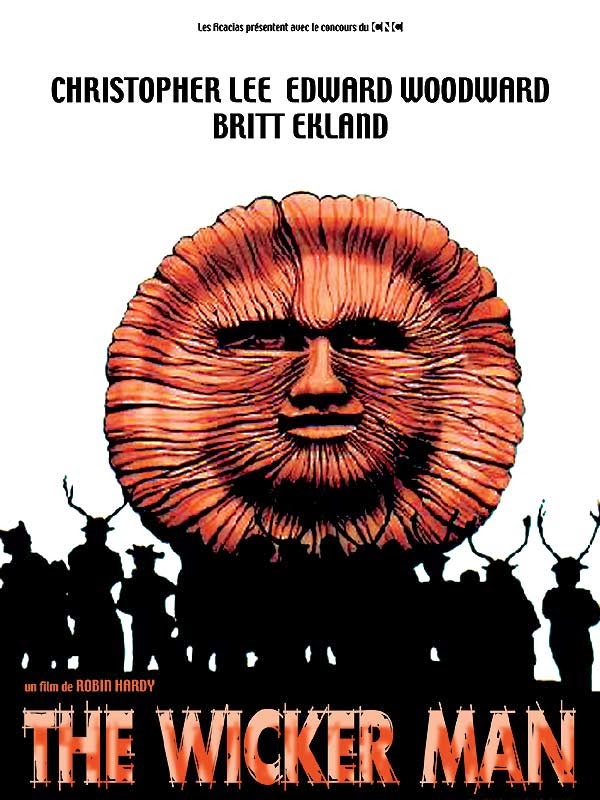 The British film industry was the repressed lot of the European cinema. The 1903’s “Frankenstein” and “Dracula” caused a stir and so a new H certificate was introduced. Later, in the 50’s to 70’s, exploitation or horror movies centered on adolescent viewers were slapped with X rating and in the 80’s Margaret Thatcher continued to wage war on horror movies. But, the British have still managed to make some cult horror classics. “Peeping Tom”, “The Devils”, “and "A Clockwork Orange” were some of the movies that conjured up enough rancor to attain the cult status. These horror films didn’t rely on ghosts or monsters to make its viewers jump. It was rather interested in the horrific elements lurking inside the human conscious and so delivered more psychologically troubling horror. Robin Hardy’s genre-bending movie “The Wicker Man” (1973) is an essential part of these horror classics, although it was critically neglected upon its release.

The events that unfolded in the making of “The Wicker Man” is just as compelling as the movie’s on-screen story. Producer Snell made this film under the British Lion Film Corporation. Few changes in the production’s house management led to Snell’s removal and the new organization decided that “The Wicker Man” was unlikely to bring in much money at the box office. It was cast into virtual oblivion. Later, the 100 minute version was trimmed by 12 minutes for the theatrical release and as a further addition to the troubles, the master negative was lost. But, thanks to actor Christopher Lee and Roger Corman’s persistence, the film has survived and since then developed a cult following to appear on BFI's list of the 100 Best British Film list. The film has also spawned three documentaries and two books. 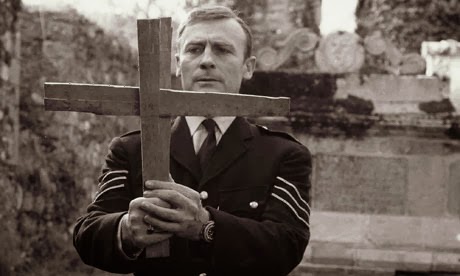 Writer Anthony Schaffer was influenced by the 1967 novel Ritual to write this movie’s script. He wanted to create a horror movie that was devoid of the blood and gore -- the characterized notions of the genre. Folk music fills our ears in the title sequence, where a small plane flies over the desolated Scottish Isles. Sgt. Neil Howie (Edward Woodward) is the man, who had traveled in this small plane and he has come from the Scottish main land to investigate about the disappearance of a child. The remote island is named summer isle. Neil Howie is an uptight policeman and a devout, straight Christian. He has the photo of the missing girl – named Rowan Morrison. Surprisingly, everyone he meets denies the existence of such a girl. Even May Morrison – the girl’s alleged mother – doesn’t remember Rowan. Howie, feeling exhausted, decides to stay the night. He rents a room on top of the bar. The pub is crowded and everyone seems to be dancing and singing. Later that night, what he sees shocks him. 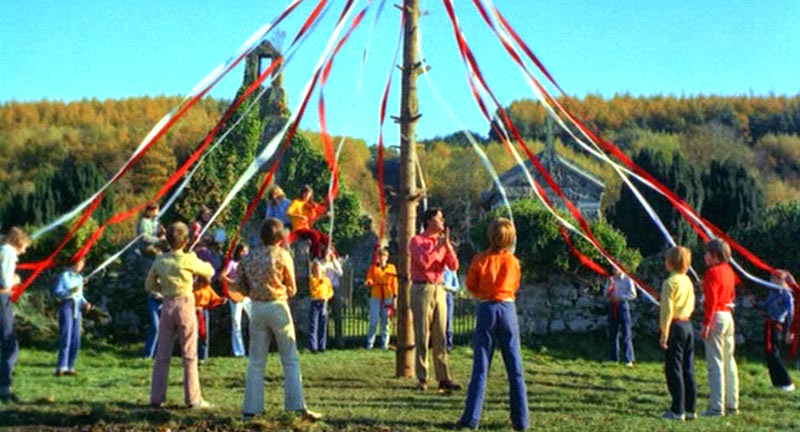 The lubricious barmaid, Willow (Brit Ekland) cavorts around her bedroom stark naked and outside of the pub, couples copulate openly. In the morning, he goes to the school to continue his investigation. There, Howie finds children dancing around maypole. He encounters a teacher (Diane Cliento) instructing her adolescent female students about the phallic symbolism. Outraged by this, Howie waltzes inside the classroom and finds a register, where Rowan Morrison’s name is entered and there is an empty desk. Howie’s persistent questions make the teacher to report that the girl –Rowan – is dead and has been buried in churchyard. Immensely troubled by the lack of Christianity and the townspeople nature, he finally decides to meet the much talked about Lord of Summer isle (Christopher Lee). On his way to meet the Lord, Howie is appalled to see the sight of young girls dancing naked around the fire. Howie confronts the civilized-looking Lord about all these sinister religious practices. The Lord explains how this island community reborn based on the pagan worship (“God had his chance – and in modern parlance – he blew it” Says the Lord). As Howie gradually uncovers the mystery about the missing girl, he also stumbles upon the possibility of a terrifying ritual. 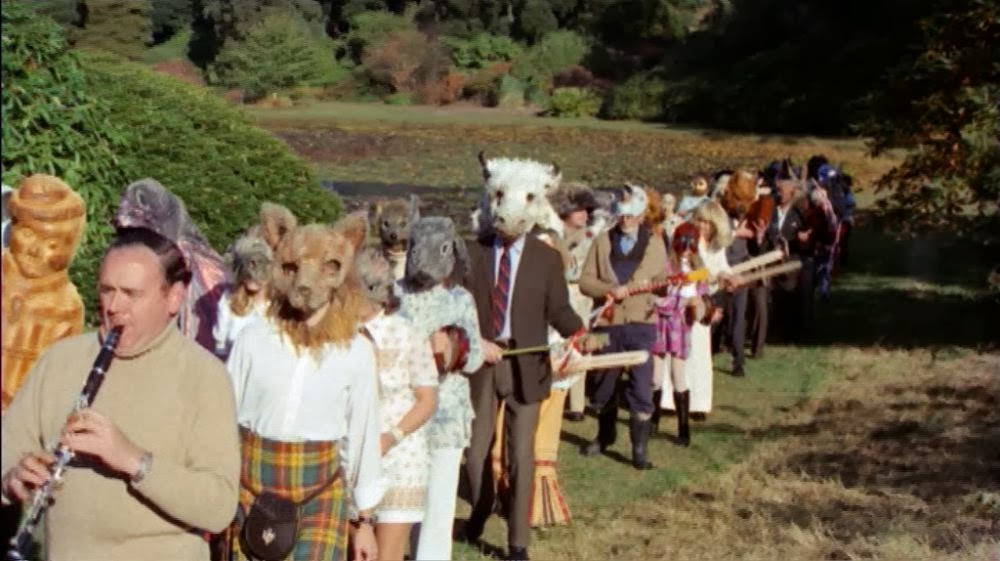 Script writer Schaffer brings out the druidic and Celtic folklore, and at the same time makes it an evenhanded dialectical allegory of the culture war between free love and establishmentarianism. Schaffer plots a religion based upon fertility and sensuality against the repression of Christianity. He also warns us about the outcomes of religious zeal. At first, we see Howie as an uncompromising member of his faith and gradually we also come to realize the zeal of the residents of summer isle, who in an attempt to appease their gods are ready to do anything. If you are watching it for the first time, you might catch many moments, providing unintentional laughs: Shocks seen in the face of Howie, the merry singing of Old men and villagers, skipping around in animal costumes may create smirks, but the ending makes us realize that nothing was a laughing matter.


Director Robin Hardy, without any sensationalism, emphasizes upon the surreal nature of the whole situation. He aptly chooses, at times, to move the story along through song rather than dialogue. The songs are perfectly not the humming kind, but are a little eerie to fit the film’s atmosphere. Edward Woodward and Christopher give an acting of a high caliber. All the viewers ought to feel safe in taking the side of Howie, even though we could foresee that his dogged persistence is going to be his curse. Edward’s broken cries and hysterical appeals make the last scene more unsettling. Lee (Saruman in “Lord of the Rings”) is perfect as the Lord, since his easy smile and baritone voice makes us remember a person that we don’t entirely trust. His presentation of religious dogma with Howie is the movie’s excellent sequence. 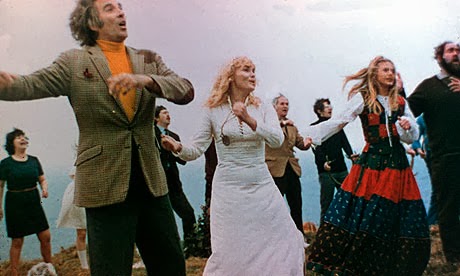 Director Neil LaBute made an American remake with Nicolas Cage in 2006. It was a perfect example that portrayed Hollywood studio’s ability to ruin a classic (recently they also ruined “Straw Dogs”). The PG-13 rated remake had all the theatrical and cheap tricks, the original tried to avoid.


The uneasy and weird tone of “The Wicker Man” (1973) doesn’t look dated. It ponders over the undeniable nature of humans, who are not willing to see the world from another perspective.