Nebraska -- A Poignant and a Mordantly Comic Road Trip 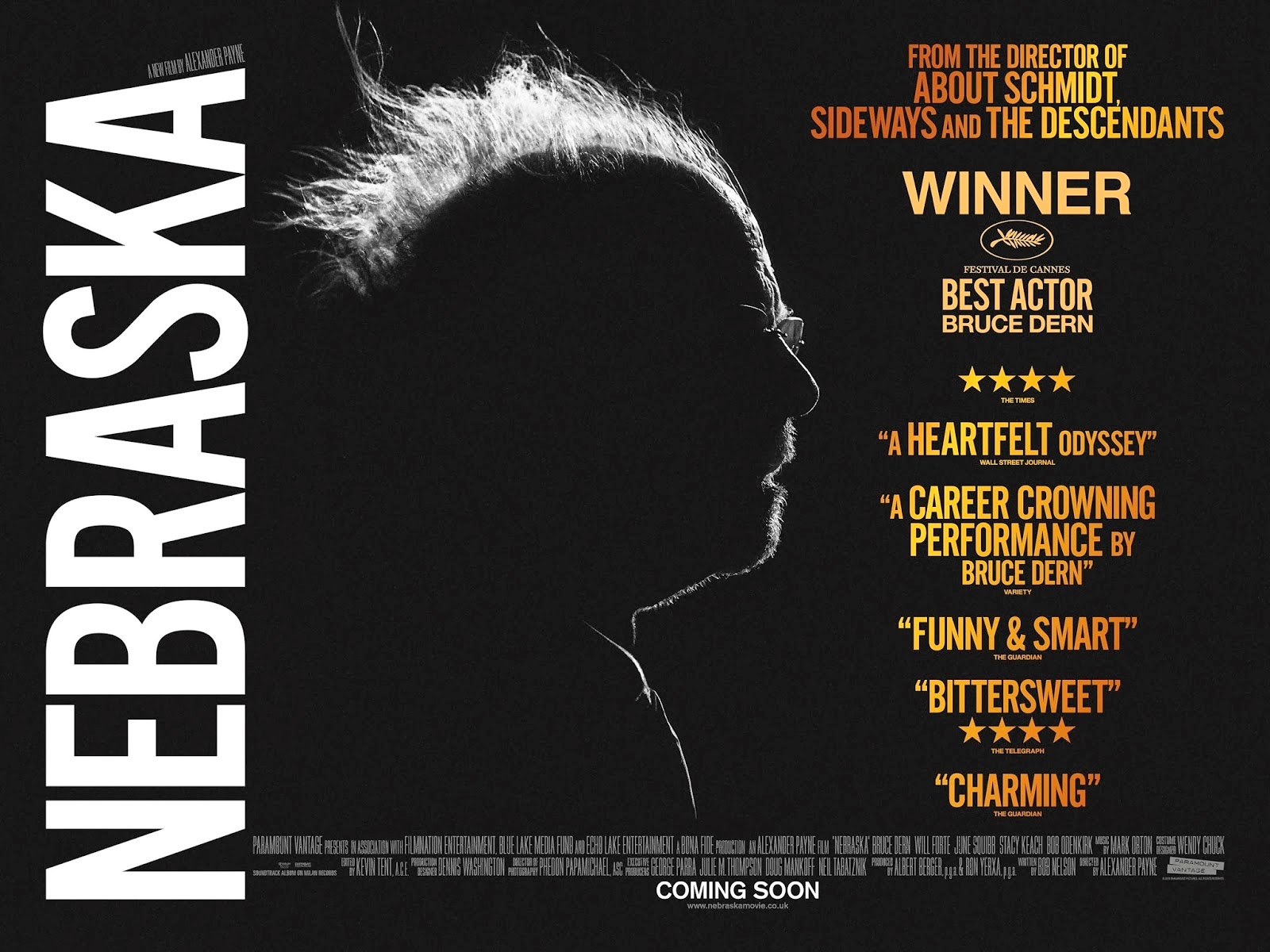 Alexander Payne makes small movies, in terms of budget. However, his movies are the richly textured ones and judging by the metrics of the heart, his movies are as big as it is beautiful. He is a film-maker, who has only six features under his belt, but with each movie, he is slowly evolving into an American auteur. His last three movies – “About Schmidt”, “Sideways”, and “The Descendants” explored the road-movie genre with a longing melancholy and humor. He was fascinated to show up the dynamic relationships of individuals during the unconventional road trips. They were all moving, enlightening, nuanced, without being overly sentimental. Not sentimental means that it doesn’t have those heartwarming inter-generational discussions. Now, he is back with yet another hazy optimistic road-movie, titled “Nebraska” (2013). Shot in black and white, the film is filled with excellent vistas of flat-lands and desolated farms. It mourns for the loss of the stout Midwestern America, which was once the country’s backbone.

“Nebraska” is home to Alexander Payne, as well as the birthplace of Woodrow T. Grant (Bruce Dern). Woodrow is a septuagenarian, a former mechanic and a cantankerous alcoholic. At the start of the film, we see him walking on a highway with unkempt hair and a wild look. He is interrupted by a police officer and was taken to home by his younger son David (Will Forte). The reason for his walking is a paper he had received, which says, “You may have won a million dollars!” Everyone knows and tells him that the letter is junk, a scam to trick people into subscribe magazines. But, Woody’s delusion and stubborn nature makes him believe that this is his own stroke of fortune. He wants to get back all those decades of diminished dreams through this sweep-stakes winning. Woody’s plain-spoken wife, Kate (June Squibb), in a state of agitation, wants her demented husband to be admitted in a nursing home. 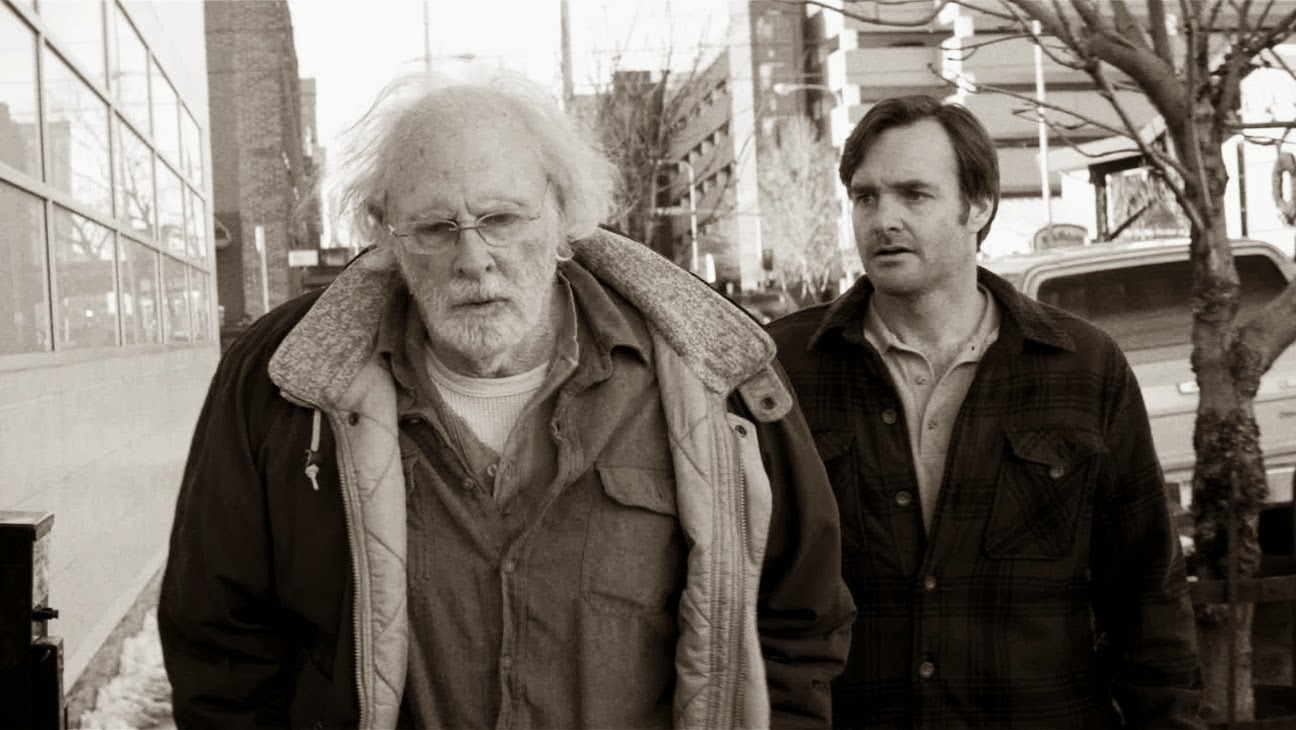 Ross (Bob Odenkirk), the eldest son and a local news anchor, who resents his father’s drunken ways, supports the mother’s view. However, David – the stereo salesman -- volunteers to drive him from Billings, Montana to Lincoln, Nebraska (835 miles) (especially to stop him from trying to walk there). Thus begins a father and son bonding road trip. That is what we might think, but Woody drunkenly injures himself and the trip takes a little detour to Woody’s home town called “Hawthorne.” He is reunited with brothers and old friends and soon becomes a local celebrity, when he announces his winnings. We learn more about Woody in his hometown, while David and the family try to protect Woody from his delusions of grandeur.

On hearing the story of “Nebraska”, another movie comes to our mind: David Lynch’s “The Straight Story.” However, Alvin Straight is a likeable genial old man, whereas, Woody is an antihero – a harder character type for us to like. He is stubborn, a pathetic drunk and dismisses his son’s attempts at bonding. So, he is complicated, unpredictable and very real human being. Even though, we dislike his characters, in the end, Payne makes us feel for him. Bob Nelson’s script brings forth the small-town bitterness, once they have heard about Woody’s million. All the old relatives and friends are lining up, conjuring us some old debt, and looking for handouts. The atmosphere slowly turns from being welcoming to threatening. Al though, these are serious things, Payne handles it with a folksy humor. The existence of these greedy small-town characters doesn’t mean that the director is being judgmental. It’s just the opposite: He embraces all these personalities, who are basically flawed, selfish and petty – just like us. There is something universal about the family reunion we see in “Nebraska.” A family reunion after two decades culminates in a dinner where no one has anything good to say. They are pouring over longstanding grievances and lurking resentments. These scenes supply the film with a real-world authenticity. Most of the Midwestern Americans have vouched for Payne’s nearly accurate portrayal of the modern American small-town. The taverns in the town are filled with guys above 50 – a reference that these places are slowly dying. With cinematographer Phedon Papamichael, Payne goes beyond words in his depiction of tranquil cloudscapes, meandering country farms and rotting rural backwaters. The long shot of a prairie cemetery and the scene that follows shows the limitations of lives.

The 78 year old Bruce Dern, an actor for five decades, uses subtlety to provide this sad, haunted, lovely performance. The stubbornness and drunken hopes of Woody are not caricatured by Dern (won the ‘Best Actor’ award in Cannes). Forte plays David, a character, which viewers can identify with themselves. He excises an effortless balance between the opposing viewpoints of his parents. We can easily sense Forte’s confusion and frustration through the conversations he has with Dern. He tries to explore Woody’s past life and searches for the slightest trace of warmth in his parents' marriage ("You must have been in love, at least at first," says David, for which Woody’s reply is "It never came up.").

June Squibb’s Kate transforms from a nagging wife into the movie’s most adorable character. Woody, David and Kate go to cemetery to pay respects to the deceased elders. But, what happens is exactly opposite: “I liked Rose, but she was a whore” says Kate standing before the grave of Woody’s sister and later lifts her skirt over the grave of an old beau, says, “See what you could’ve had, Keith, if you hadn’t talked about wheat all the time?” She constantly badgers Woody for his pointless quest, but at the same time, she was the first person to stand for him, when the old relatives are looking for some money. In these later scenes, Squibb brings forth a wife, underpinned by a thick seam of affection and a shared understanding.

“Nebraska” (115 minutes) is a detailed study of a life and its roots, offering some thought provoking insights. It is cold and unforgiving, but leaves us with an oddly buoyant feeling. Alexander Payne’s deeply humanist film may grow larger on your memory, once you have experienced it.