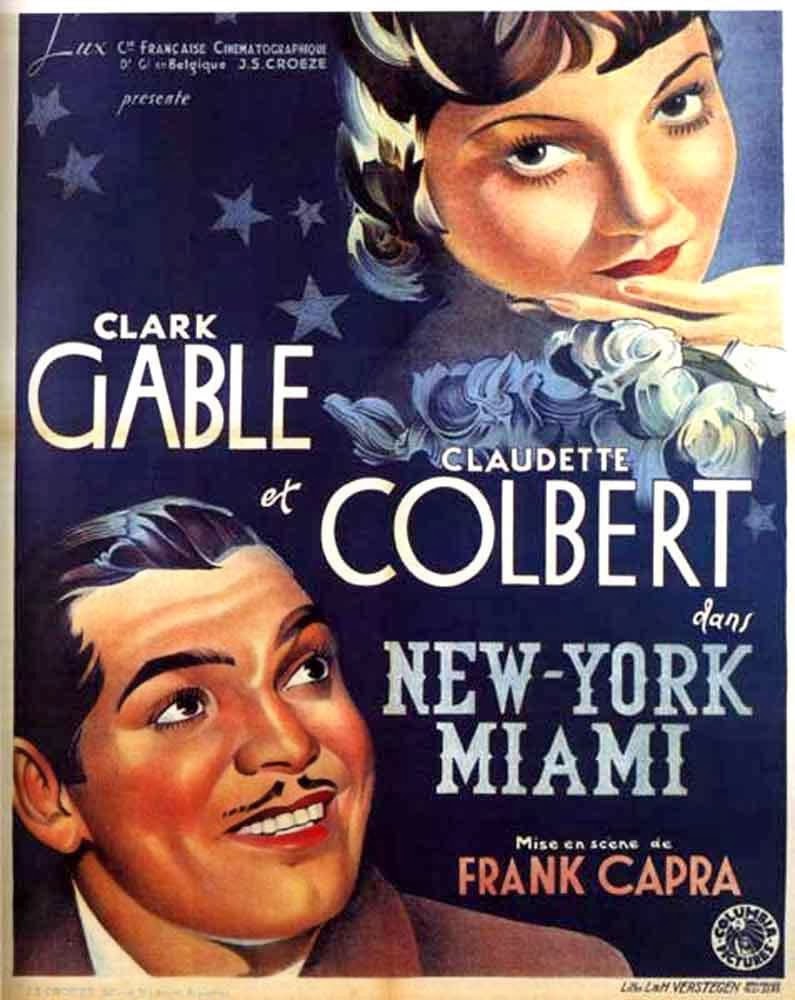 In 1930’s, US suffered from ‘Great Depression’, and so did Hollywood studios. Most of the films released during that time failed to give a livelier movie experience for its audiences. In that time, came a screwball comedy – a word that would dominate Hollywood comedy genre in later years – which was directed by Frank Capra, titled “It Happened One Night” (1934). It was Capra’s first classic and it was a best entertaining Hollywood material, which merged the realities of depression era with the fantasies of big screen. The snappy dialogues and eccentric acting went on to be the deciding factors of screwball comedy, but Capra’s movie is also a true-to-the-times genteel romance. The film’s story was based on a short story entitled “Night Bus” (by Samuel Hopkins). Colombia Pictures, after reading the film’s script turned it down, calling it ‘frothy and lightweight.’  Later, revisions were made to the script; Capra got the approval and also got the favorite romantic leading man ‘Clark Gable.’ Even if you are seeing it for the first time, you can guess the way, a scene unfolds, since it has been imitated by numerous television shows and films.

The overprotected Ellie Andrews (Claudette Colbert) is the daughter of an immensely rich patriarch. He keeps her confined in a yacht, in Southern Florida, in order to prevent her from joining the worthless playboy and adventurer King Westley (Jameson Thomas). She has already eloped with him and married out of spite. The recalcitrant Ellie jumps off the yacht and swims ashore. Ellie, who has never been on her own, discovers the livelihood of working class Americans in depression era. She also decides to travel anonymously on bus, to avoid her father’s hoard of detectives. Ellie trip to New York (where Westley is located) catches the attention of proletarian newspaperman, Peter Warne (Clark Gable), who travels on the bus with her and figures out her guise. 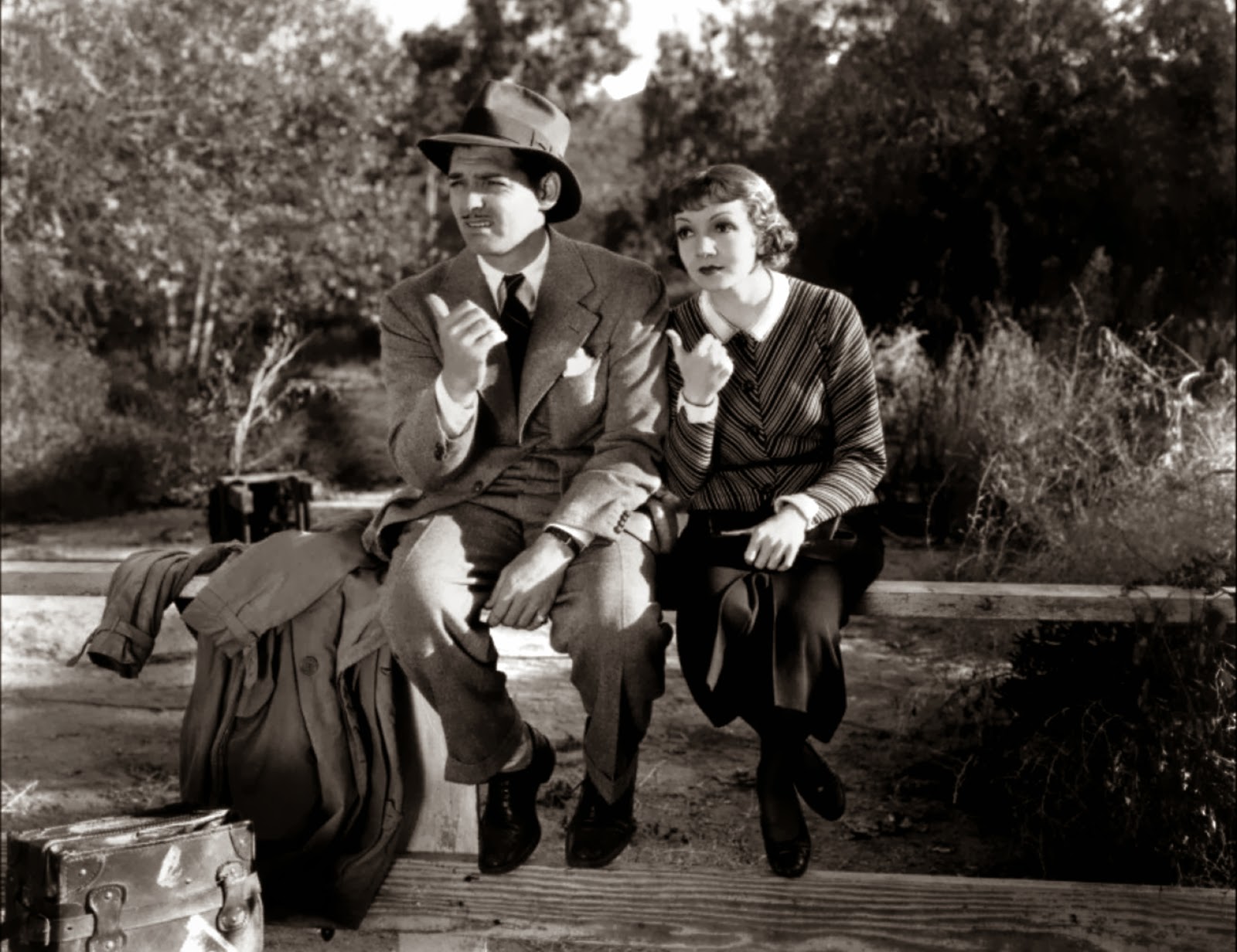 Despite Peter’s contempt for upper class, he gets attracted to the charm, beauty and guts of Ellie. To keep matters more concerning, we see the fiery Ellie losing her suitcase. Now, Peter takes her under his wing because he thinks that there is a story in her plight. In exchange, he agrees to take her to Westley to have a proper wedding. Thus begins a love/hate relationship, which mostly camouflages flirtation with heavy arguments.

Frank Capra doesn’t make this film as a romantic comedy. He also takes us through a distinctive Depression-era American landscape. The film’s most inspiring scene is the one, which takes place inside a bus, where the passengers, strangers to each other, sing a song and invent a moment of hope, which makes them united as members of a community. Hollywood entertainment of the 30’s didn’t much concentrate on the downbeat locales of reality. Bus stations, dirty roads, outdoor bathing houses, raw carrots and one-donut-one-egg breakfasts were not the common things, you see in the old, falsely glittering Hollywood flicks. Yeah, the movie’s central theme: “Love wins all classes” has been done to death in films made all over the world, but Capra’s vision still seems afresh and sharp-witted. Many modern rom-com jumps into romance part without the development of characters. But, here, Capra takes time to set the emotions of his characters. Colbert’s Ellie character in modern movies would have been turned into an unrelatable, stereotypical rich girl. However, Riskin’s adapted script provides some glimpses of Ellie that allows us to see her as a rebellious spirit held by the father as a prisoner. Her pampered existence is neatly explained through that continual surveillance.

Capra, previously directed Claudette Colbert in the 1927 movie “For the Love of Mike.” That movie’s failure made her to approach this project with skepticism. She was eventually offered a fee that was double the standard amount. But, she still continued to express displeasure in the set, which certainly helped her character of bored rich girl. Her indifference and demureness works very well in the scenes against Gable. After winning that year’s Best actor Oscar, she even credited Capra. On the other hand, Gable infuses enough smart-aleck rudeness into Peter without turning him into a dull person. The playfulness (his first comedy role), he showed here was not often evident in his later important works (“Mutiny on the Bounty”, “Gone with the Wind”). He also won an Academy Award for his role.

“It Happened One Night” was surely victimized by many copycat stories. Nonetheless, nothing takes away Gable and Colbert’s fresh performances, and Capra's deftness.  It is a quintessential rom-com that isn’t about comedic bantering, but also about the slow burn, which reveals the full bloom of love.