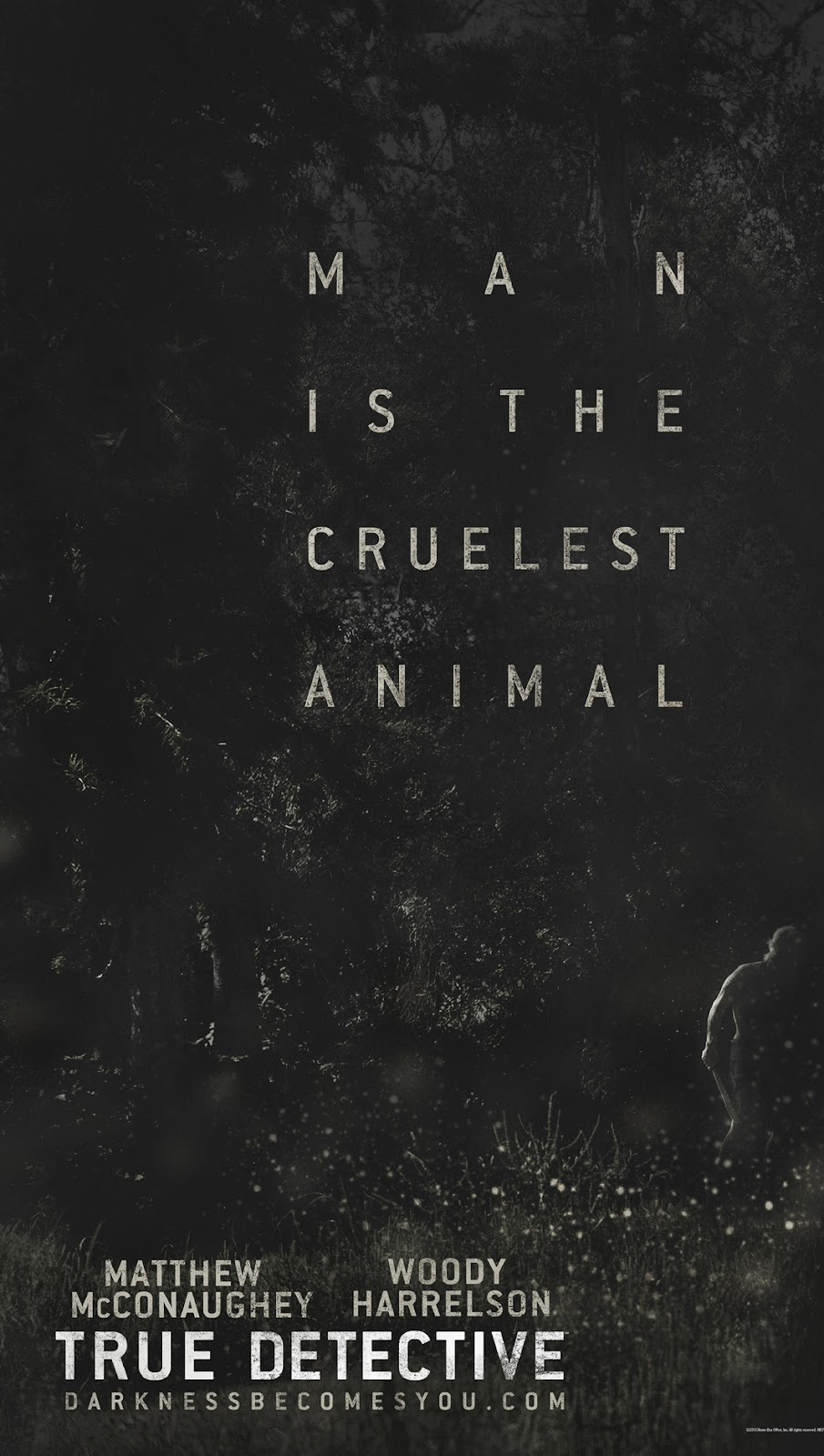 In the recent years, every time when I browse through Facebook or IMDb, someone is insisting that I really should be watching this new must-see television series: “Homeland”, “Walking Dead”, American Horror Story”, the list goes on. Yet, there’s three TV series, above all, that keeps on springing up in my mind, when I think about American TV series: “The Wire”, “Game of Thrones” and “Breaking Bad” (still haven’t watched “OZ” and “Sopranos”)  All sorts of people are confessing that they are or were addicted to these series. Well, if you ask what’s the secret behind this huge success? I have to say that they are breaking most fundamental rules of Television. For example, “Game of Thrones” maturely explores the political power, and the horrible things people do in pursuit of it; Vince Gilligan’s “Breaking Bad” embarked on a larger-than-life journey, tracing an arc, which was previously reserved only for iconic characters of literature and cinema; “The Wire” showed us that cop/justice/politics system   were too robust to be brought down by few angry citizens. Most importantly, all these TV series have largely avoided spoon-fed-black-and-white characters. Well, now, we have yet another ground-breaking TV show titled “True Detective” (2014 -- ) -- created by novelist Nic Pizzolatto – which is taking the procedural dramas to another level.

“Bones”, “CSI”, “Criminal Minds” were some of the successful police procedural TV shows. Each episode has a self-contained narrative with a beginning and end, satiating the viewers’ needs for whodunit mysteries. Even last year we had “Hannibal”, which made us think that the murder mysteries are going to exhaust the viewers. However, “True Detective” has set broader themes and goals that are so innovative than most others. FX’s “American Horror Story” took the direct anthology approach: each season of the show has a fresh start with new setting. Now, “True Detective” has taken this same approach to a step further.  American Horror Story used the same cast members to portray the different characters in each season, whereas True Detective only has plans to use its actors for the eight episode airing. Another brave attempt is that “True Detective” has only one writer (Pizzolatto) and one director (Cary Fukunaga). Usually, in a TV series, writing is done by a group of talented guys and directors are never tied to the identity of a show. This TV series has also attracted high profile Hollywood actors: Woody Harrelson and Matthew McConaughey. These excellent character artists, with their strong artistic focus are slowly changing the perception that the ‘TV actors’ belong to a lower circle than movie actors. 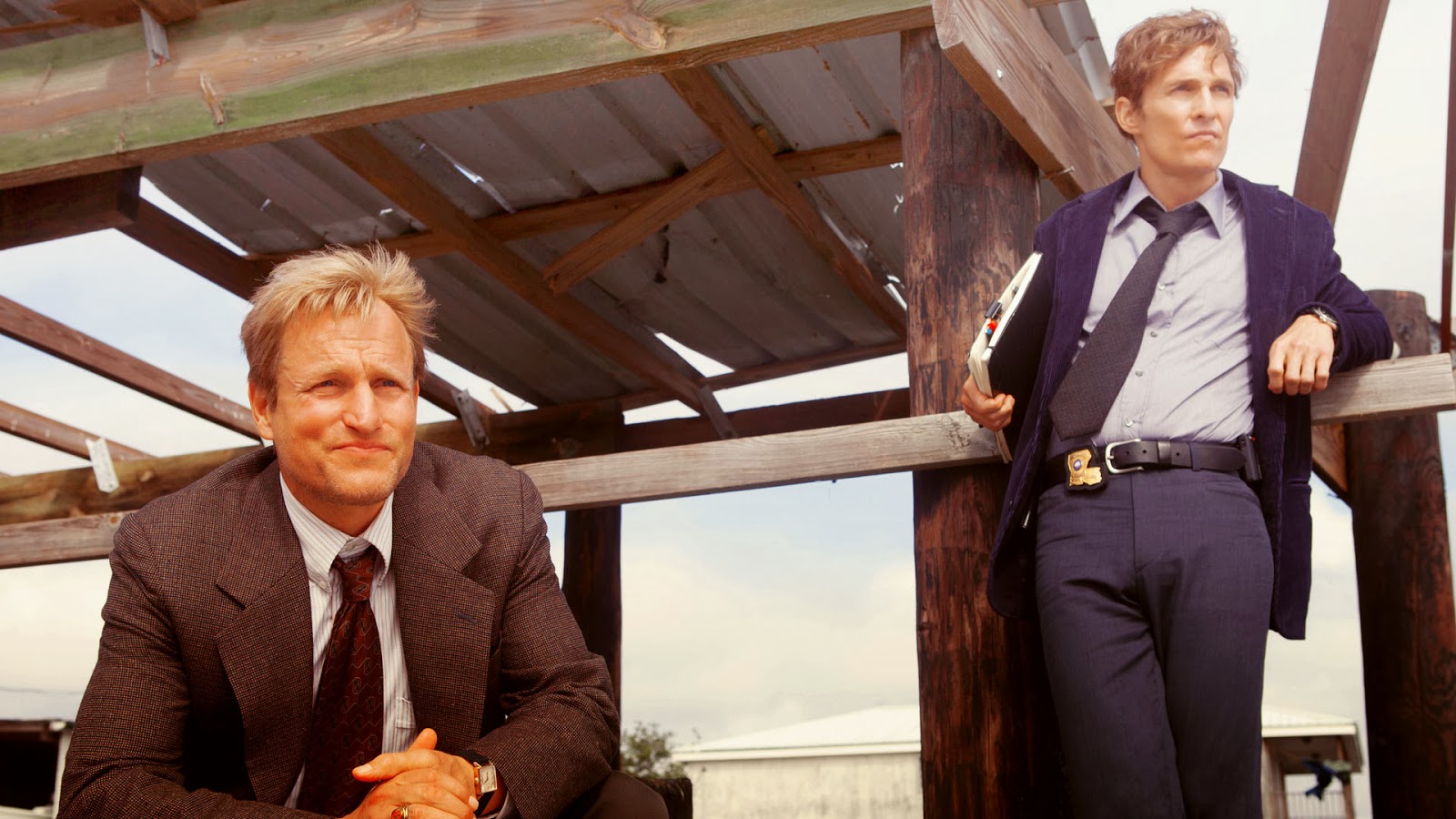 This eight-episode anthology also moves like a big movie: it is filmed on excellent locations and the imagery is haunting as well as beautiful. Recently, the season’s 4th episode created lot of buzz on the internet: it is said to have used single six minute track shot – traversing over fences and gunshots – to create a first-person experience for the viewer. When was the last time we have seen such experiments in a TV series? Before exploring the shows’ themes, let me explain the story briefly. The series begins in Louisana, simultaneously, in 1995 and 2012. In 2012, the detectives Marty Hart (Harrelson) and Rust Cohle (McConaughey) are separately interviewed by the officers regarding a murder case they both work together in 95.

The story flashes back to the past, in 95, where a young girl slashed, drugged, tortured was placed in a field, wearing a crown of antlers. Rust is a burned-out former undercover narcotics cop. He is a mystical figure, carrying some harrowing memories. To Hart’s dismay, Rust often spouts some existential philosophy. Hart is the typical macho cop, a family man (with two kids) and has a sex life outside marriage. The case, which looks like an occult crime, gets more and more complicated as do the relationship between these two men. 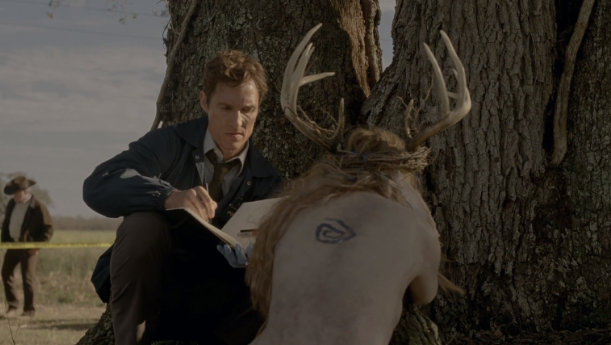 “True Detective” is definitely not fun entertainment (lacks the black comedic notes of, say, “Breaking Bad”). A chilling darkness lurks around each corner of the narrative and McConaughey’s character embraces the pessimism. He says, “I think human consciousness is a misstep in evolution. We are things that labor under the illusion of having a self, programmed with total assurance that we are somebody, when in fact we are nobody.” He also holds many ideas that are bleak and hard to swallow, but at the same time, most of his rambling are thought-provoking and has been uncharted territory in popular TV shows. The show has a unique approach to religion. One scene takes place inside a tent revival meeting and Rust belittles the IQ of everyone assembled there. The debate with Marty leads to a point asking, whether religion controls bad behavior. Rust coolly says, “If the only thing keeping a person decent is the expectation of divine reward, then brother that person is a piece of shit and I’d like to get as many of them out in the open as possible.” Another persisting theme is the interrogation. Rust is famous for his interrogation technique. When the two detectives, in 2012, ask him about his methods, he gives back a rattling response, “Everybody knows there’s something wrong with them. They just don’t know what it is.” 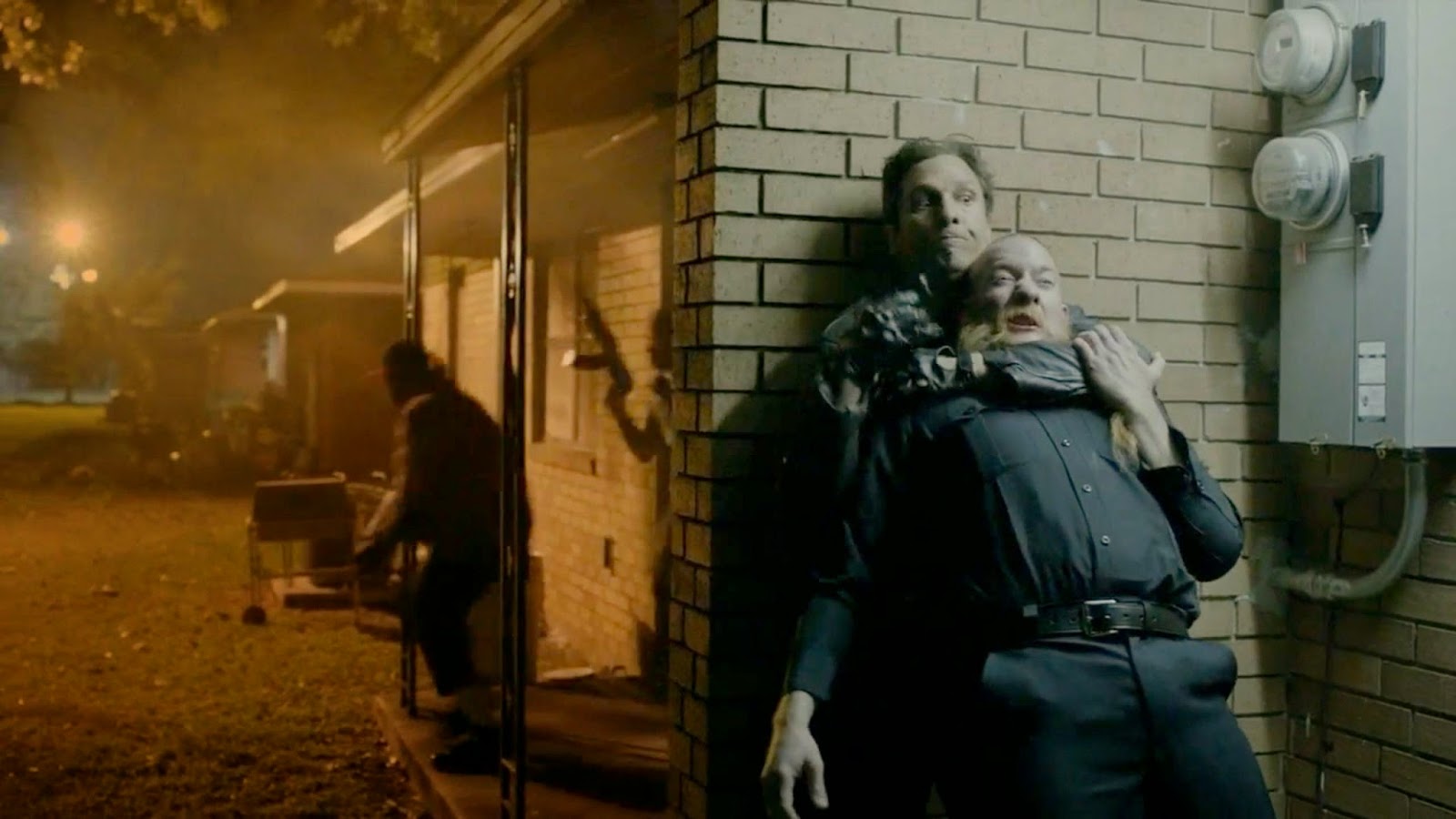 Each frame is filled with paranoia and anxiety, but it is never quite depressing, taking into account the nature of the story. It is an enlivening experience to watch these detectives searching for the truth: maybe it’s the details or the performances or the perfect realization of the mystery genre. Whatever is the reason, “True Detective” perfectly incorporates big ideas within a whodunit tale. I have watched the relayed five episodes and think that the show will get more complicated, since our narrators unreliable, divulging far from the real events (Five hours with these characters, you will also feel that they more mysterious than ever). Whoever turns out to be the killer or whatever is the reason, “True Detective” will definitely be one of the best  psychologically scary drama.