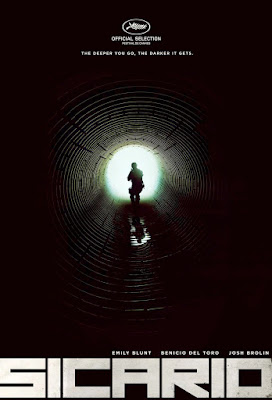 Cycles of male violence is one of the very important themes Canadian film-maker Dennis Villeneuve likes to explore. And women are either at the receiving end or forced to stand with calm grace as violence hovers around. Villeneuve’s first two movies, “August 32nd on Earth” (1998) & “Maelstrom” (2000) were about the psychological abuse (or violence) underwent by his women protagonists. Guns were pointed at female engineering students in the film “Polytechnique” (2009) (based on Montreal students massacre of 1989), while Oscar-nominated “Incendies” (2010) had distressingly poetic visions, which gazed at the roots of war from the perspective of two adult women. The oblique tale “Enemy” (2013), among many other themes, inquired on men’s treatment of women. Even though Villeneuve didn’t write the script for “Prisoners” (2013), he chose one, which was all about women thrown into despair by male violence. With “Sicario” (2015), by using the label ‘drug-war thriller’, Villeneuve once again chosen a tale about a woman, contemplating as well as fighting for her place in the ‘wolf’ traversing land.

Director Villeneuve also has this fascination with ‘doppelganger’ element that drove the works of some legendary film-makers like David Lynch, David Cronenberg, etc. A dichotomy either geographically lays side by side or the dichotomy resides inside a disturbed human mind. In “Sicario”, there is a wonderful, brooding aerial shots that shows how one of the peaceful cities (El Paso, Texas) stands close to one of the most violent city in the world, Ciudad Juarez. And, let’s not forget Villeneuve’s likeness to portray the poetic calmness that is brutally uprooted in a moment by the nauseating violence. In fact, Sicario's one such poetic, brooding sense of silence is suddenly bulldozed by a SWAT vehicle, carrying FBI Kidnap Response Team. 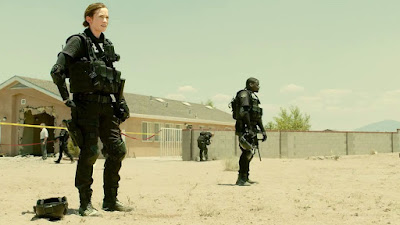 The calmness of an Arizona suburb is disturbed and there our fearless/vulnerable by-the-books FBI agent Kate Macer (Emily Blunt) witnesses the ripple effects of Mexican drug war. She and her team respond to a hostage situation, gunning down two perpetrators. They also make a horrendous discovery of dozens of bodies, lining the walls of the derelict house. Soon, the agents are surprised by an explosive device, rigged in the basement and two men are killed. Kate is obsessed with getting the men who are really behind what she saw. She is chosen by an elusive, sandals-wearing official Matt (Josh Brolin), who promises to cut the head of the cartel snake by getting through the cartel’s American connection Manuel Diaz. Matt says his job is to ‘dramatically overreact’ and that’s what he has planned to do, by bringing in a shadowy colleague named Alejandro (Benicio del Toro). Kate isn’t sure what’s her job is, but she tags along hoping to get the bad guys. Matt, of course has a hidden agenda, but it isn’t that hidden. If only she was wise enough, she could have predicted that only a vortex of darkness remains within. 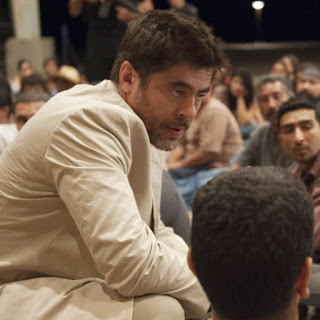 If you are going to watch “Sicario” expecting an original plot or a fresh take on America’s war of drug, you would be grossly disappointed. But, first time screenwriter Taylor Sheridan unwraps the layers of simple story with an ingenuity that also works as a wonderful character study of two morally opposed persons. The question Sheridan raises is something the movies have always risen (“Should one transform into a monster to kill a monster?”), but the script gets to that point in an organic way rather than pedantic manner. The dialogues flows freely (“You’re asking me how a watch works”……”Nothing will make sense to your American ears”……”This is the land of wolves”…... etc) and elegantly hints at the turmoil that waits for them. But, “Sicario” wouldn’t have brooded long enough in our mind, if not for the indelible sense of dread, injected by Director Villeneuve.

Villeneuve and the masterful cinematographer Roger Deakins concoct pulse-pounding images that are rich in poetry too. Each frames exhibit layers of visual complexity, yet there is a cumulative effect to the flow of images. The slow-steady camera movements, the spectacular aerial shots and perfectly calibrated visuals are interspersed to give that agitating tone – the one that digs under our skin (composer Johann Johannson also heavily assists to set the tone) – which makes our subconscious to think: ‘isn’t this as close as to reality’.  It’s amazing how much tension and pressure the visual approach diffuses on us, especially after considering the film’s limited budget of $32 million. At various points, we are made to wait for the arrival of violence, although nothing happens. Take the scene, when Alejandro investigates the arrested migrants of Nogales about the tunnel. It’s a fairly simple scene, but the way it’s performed and the means by which it is staged doesn’t wear off the emotional strain we felt in the previous sequences. While Villeneuve shows the piled-up bodies on the wall like an art of high-horror, he also perfectly makes use of the power of suggestion (like the torture sequence). 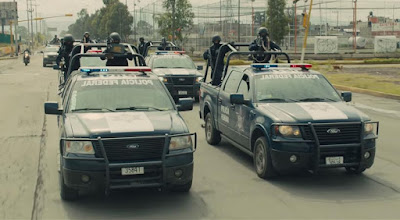 Deakins once again employs natural modes of light and shadows to create the world, whose inhabitants and landscape showcase inherent duality. One of my favorite scenes that beautifully notes the dichotomy involved in visuals is when Alejandro pays an unannounced visit to distressed Kate to sign a paper. Alejandro’s face is clouded with darkness on one side, brightly lit on the other side; he places the gun under Kate’s jaw, while his other hand wipes her tears. It is a fairly predictable scene, but once again the staging makes it to be a poem on Alejandro’s nature. There are many such visual hints in the narrative, which is what makes “Sicario”, not another drug-war thriller. Villeneuve impeccably brings out other important duality in the script: idealism vs realism. There’s a conflict between the American fantasies of bringing in an order (called as ‘end justifies the means’), while its activities only spawns more chaos or disorder. The director repeatedly refers to the strain of family sentimentality among cartel leaders and corrupt cops, whose urge to protect & provide their families makes them to live oblivious of the sufferings they cause. There’s a sub-plot in the script to give us a victim’s standpoint, which could easily be turned into a clumsy, attention-gaining thing. But, the director precisely makes the point on the cyclic nature of violence with limited visuals. 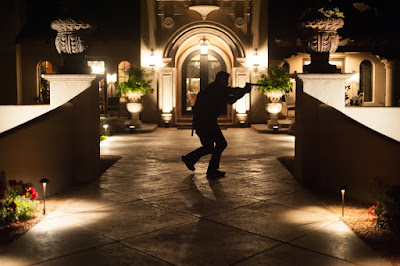 And as I mentioned earlier, Villeneuve brings in his often repeated theme of ‘female condition’. In the end, it could be read as a character study of a young, resilient woman, who is displaced by the senseless male violence. There are also other unseen or unspoken women in the movie’s frames who are vanquished by cyclical nature of male violence. However, one thing that bothered is the ‘wolf’ quote. Does is say that the women don’t have a killer instinct? Villenvue in his interview to ‘The Playlist’ clearly states that the reference to ‘wolf’ is not about gender; it is more about the individual’s human quality and generation (as always ‘younger generation’ represents hope than those wolfish, old-fashioned idealism). Emily Blunt plays Kate with vulnerability and intensity which doesn’t push her into the standard female action characters. Del Toro plays Alejandro with sad eyes, only to shock the viewers with his rapid, brutal transformations. The tacit chemistry between these two adds a reflective facet to the narrative.


“Sicario” (121 minutes) is a cartel-busting thriller which is set in the murky atmosphere of uncertain allegiances and spiraling violence. Although its message is simple, the, poetic beauty of its vileness gives us an astounding viewing experience.