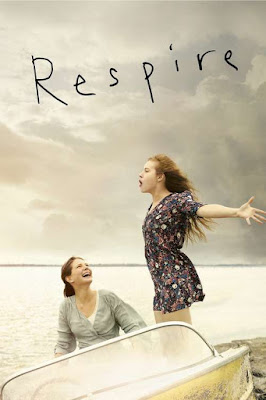 Anne-Sophie Brasme was just 16 years old when she wrote her first novel “Breathe”. Melanie Laurent also made her feature-film debut (as actress) at the age of 16. When the multi-faceted French actress read the novel, who studied film-making in school, wanted to turn into a movie. After making couple of shorts and a feature film (“The Adopted”), Melanie has adapted “Breathe” aka "Respire" (2014) with a highly refined sense of direction, while at the same time burrows the torment of a 17 year old girl deep underneath our skin. Brasme’s novel, when released, was termed as a ‘Young Adult’ novel. However, it differs so much from the YA template that it becomes a universal story of friendship between two people, who had never experienced real love in their lives.

Teen friendships can either give you nurturing or strangling experience and it’s hard to tell which way it is headed. “Breathe” tackles the hormonal-driven closeness of two 17 year old girls, Charlene aka Charlie (Josphene Japy) and Sarah (Lou de Laage). The film opens with Charlie getting up from her bed, hearing the enraged voice of her mother talking with absentee, abusive father. Charlie sits at the dining table and dips her face into the bowl of brewed coffee to obscure her feelings. Her dad offers her to drive to school, but she rejects and walks alone wearing a mask of melancholia. Charlie’s loyal friend is Victoire, who often bickers about boys. In comes Sarah, a natural beauty, whose mother works for a NGO in Nigeria.  Charlie is immediately drawn to this girl, who exudes confidence and excitement like none of her classmates.

Sarah is tired of her cackling aunt with whom she lives and her absentee mother. She needs a sense of stability, while Charlie wants to experience free-spirit and fun, which they both can give to one another. An instant emotional bond is formed and later Sarah tags along for Charlie’s family vacation to seashore. The girls’ emotional bond strengthens and then gradually weakens during the vacation. Sarah seems to be the girl who can never emotionally invest herself onto somebody for a long time. Charlie is just the opposite in this: she is the girl who gets obsessed over a firm emotional connection. In an earlier scene, a teacher says ‘passion’ is something that emerges from the gut. The shared passion that made possible the friendship between these two girls eventually turns into torment, which figuratively delivers a strong punch at Charlie’s guts.

Sarah got to be one of the most familiar figures in movie history. The way she pouts her full lips; the manner with which she sexily sways to the disco song; that studied casualness; that rock ‘n’ roll attitude. So, it’s pretty easy to predict that Charlie is going to be seduced and witness anguish through Sarah. But, still there is something intense in the way Melanie Laurent has unwounded the script (co-written with Julien Lambroschini) that keeps on creating incisive, detail layers about the characters. The layers are stacked up so elegantly that the script at no point displays YA novel sensibilities. Laurent transcends the ‘Mean Girls’ territory and draws us to ponder over the roots of the obsession and animosity that plagues these girls. “Breathe” could simply be considered as a treatise on damaged single mothers. The dysfunctional bearings of the older women and their existential vacuum are what reverberated throughout the movie in the girls’ actions. Laurent and Julien aren’t just saying “Oh yes! women can be cruel to each other too”. Beneath that statement, we are also left to contemplate over how women are trained (or should I say forced) to possess undiminished source of empathy and forgiveness (the battered mother-daughter duo’s actions reflect this theme).

Insecure feeling, the most common fearful aspect of adolescence, is the main theme of the narrative. One girl refuses to act on her emotions, while the other acts upon every emotion that comes upon her mind so as to fulfill that yearning for acceptance. Insecurity plays a vital role on both their polar opposite behavior. The students’ drinking, drug intakes and aroused rocking of hips become a symbol for that insecurity. That feeling, however, isn’t confined to these adolescent people. The adults in the film feel that too and they indirectly seem to advice their young ones to drink or dance away one’s problems. Although the viewers might choose to villain to hate, the script addresses the question of Charlie’s treatment of her previous BFF Victoire. The shocking end also asks us whether Charlie need to have put up with so much of the ill-treatment that eventually drained her of kindness.

“Breathe” even with a robust script couldn’t have delivered that gut punch, if not for the deft directorial touch of Melanie. The naked emotional truth the director displays is as honest as what we witnessed in Abdellatif Kechiche’s “Blue is the Warmest Color” (a film whose low-key charms are overlooked due to that infamous long sex scenes). There are hints to Charlie’s need for physical closeness with Sarah, but it is an aspect that’s never treated in a trite manner (Melanie treats it as a propagation of Charlie’s passion towards Sarah). May be under the hands of another director, “Breathe” could have become a full-blown sexual relationship movie. As a viewer, we are meant to take Charlie’s side and hate Sarah, but the director shows wholehearted compassion even for the manipulative assailant. For example, look at the way the film-maker has staged the scene when Charlie takes a look into the false, precarious life of Sarah. Laurent employs a smart tracking shot to put us on Charlie’s point of view in order to perfectly extract the empathy of ours on Sarah’s life. So, when Sarah threatens & bullies Charlie for learning the truth, the emotional brunt falls on us too.

Director Melanie has an excellent eye for shot compositions. Along with cinematographer Arnaud Potier, she creates a barrage of visually communicative shots. When the split starts between the girls, there is a wide shot (first one in the film I think) of Charlie standing alone amidst a sea, symbolizing the sea of afflictions she is about to encounter; when the bullying reaches a threshold point, there is a shot of Charlie watching the sunset, reeling in the impending doom; and there is also a shot of grey bare-branched tree reflecting on the glass pane through which Charlie watches Sarah. The brief shot is composed in a way that indicates the brink of her emotional fissures. It’s these little, subtle shots that sustains the gritty atmosphere throughout the end. Of course, all this directorial and writing excellence wouldn’t have survived, if not for that anchored presence (not just performance) of Japy and Lou de Laage. Japy’s passive blankness and Lou’s terrifying volatility are hard to forget.


“Breathe” aka “Respire” (90 minutes) is one of the best sensitive, unsentimental films to showcase the fragility of adolescent friendship.