The Farewell Party [2014] – An Invigorating Tragicomedy 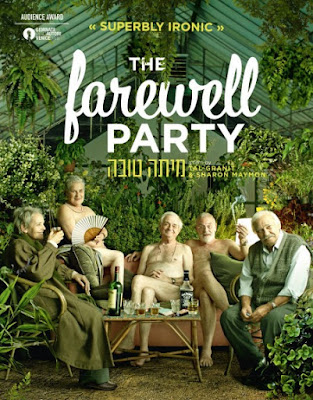 If you google the word ‘Euthanasia’ and look for its definition, it is said: “The intentional putting to death of a person with an incurable or painful disease intended as an act of mercy”. So, it a very grim subject and film-makers seldom touch a subject that is about the slow, painful death of the old. Nevertheless,  Israeli writer/director duos Tal Granit and Sharon Maymon’s “The Farewell Party” (2014) aka “Mita Tova” (translates to “A Good Death”), have not only brooded on the subject of euthanasia, but also concocted sequences, infused with a warm, darkly comic energy. It might be tempting to call it with a disputable tag ‘Euthanasia comedy’. But, don’t worry; it isn’t a mocking, comedy of errors about the concept of assisted suicide. The film, more or less, achieves an improbable balance of tone and never loses its focus in asking the big questions about the haunting aspect of all lives, i.e., death.

“The Farewell Party” can be best described as a feature that evenly diffuses the vision of Michael Haneke (in “Amour”) and John Madden (in “Marigold Hotel”). Movies that discusses such a serious subject would usually enamor a niche audiences as it jumps out of the award-season floodgates, but “Farewell Party” also said to have gained the attention of Israeli mainstream viewers (declared a smash-hit and also nominated for 14 Israeli academy awards). Yehezkel (Ze’ev Revach) is a septuagenarian prankster and sharp-minded innovator. When we first see him, sunlight shines with effervescence into his retirement home room (situated in Jerusalem). Without words, that image tells us Yehezkel is playing ‘God’. He is using a computer mic to distort his voice and talking to a senile, cancer-afflicted old woman, Zelda (Ruth Geller) as God, and instructs her to continue her treatment. He simply says ‘heaven has no vacancies for now’. 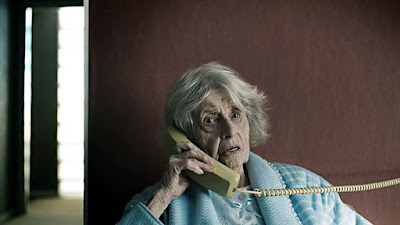 But, Yehezkel isn’t always having fun in the retirement home. He and his wife Levana (Finkelstein) are forced to witness the gradual death of a dear friend, Max (Shmuel Wolf). The terminally afflicted man’s wife Yana (Aliza Rosen) asks Yehezkel to put her husband out of his misery. Yehezkel is rattled by the suggestion and Levana asks him to not even think of considering Yana’s request. However, the desperate Yana enlists fellow retirement home inhabitants – Dr. Daniel (Ilan Dar), a former veterinarian and ex-police chief Raffi Segal (Rafael Tavor). Daniel and Segal are closeted (literally) homosexuals. Although Levana is disturbed by the idea of assisted suicide, Yehezkel offers to build a machine that will allow Max to push a button give himself a fatal dose of tranquilizers. 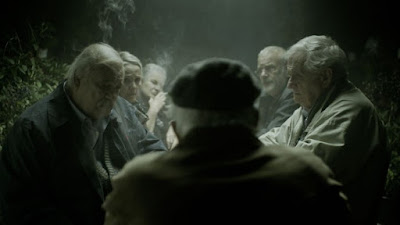 As a note of Irony, this device is connected to Max’s Sabbath timer, which is a vital gizmo for orthodox Jews (see Wikipedia’s ‘Electricity on Shabbat’ for details). Max peacefully dies, but the word passes around about the existence of Yehezkel’s device. A bereaved old man asks the crew to visit his wife or that he would visit the law officials. Levana is more troubled by this and her little memory losses gradually turns into a full-blown dementia. She even asks the retirement home’s director to find her a different place, fearing that her own husband & friends would put her to sleep. Yehezkel wishes that he never played around with death after witnessing his wife’s worsening condition and as more offers for using the device pours in.
The plot details may sound a little crass or too somber, but except for s few mis-construed sequences, it is astoundingly balanced. The gathering of these elderly men to perform their deadly job was given a healthy dose of dead-pan, dark comedy. Writer/directors Maymon and Granit imbue the sweetness of an American comedy and mix it with the earnest emotions of European films. The humor in lot of ways tries to push the cinematic boundaries related with the discussion of age, terminal illness and death. The laughs and chuckles that come out of our heart also provoke some deep thoughts in our mind. But, I think the directors stumbled a little, when they had to adopt a totally grim tone in the film’s third act. The moral dilemma regarding Levana’s illness is clearly portrayed and so the ending is anything, but predictable. But, still the events that led to ending seemed a little too mundane, when compared with the inventive first two acts. The ending appeared to give us some answers or strong opinion. I would have only preferred the big questions. 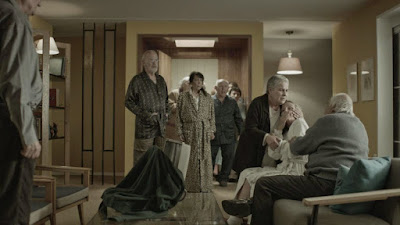 The presence of muted color schemes and clear interior spaces conveys how grim the atmosphere of assisted living is. One of the often repeated quotes about old age is “growing old isn’t for sissies”. The elderly ensemble cast and the manner with which they showcase their inner conflicts makes us remember that quote. The close-up shots of Revach’s face (plays Yehezkel) speak about the battles going inside him, which the words couldn’t. Finkelstein as Levana is my most favorite performer of the cast. She gracefully expresses the fear, embarrassment, and painful sadness through her eyes.

Barring few flaws, “The Farewell Party” (95 minutes) turns out to be a vital work that discusses themes often omitted in visual medium: old age and death. It should be watched for its low-key humor and perfect, nuanced acting.