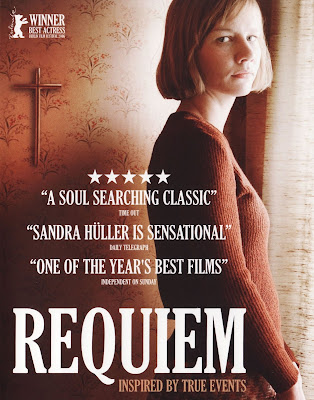 A majority of commercial films exorcises empathy, turning individual personalities into types. Audiences tend to expect for a distinct good and evil paths, so that they can be solaced by the filmmakers’ judgmental vision. The presence of such paths plagues all genres, especially the Horror films. The possession sub-genre in ‘horror’ repeatedly wishes to present the glory of divine beings through the arduous fight with Lucifer or Old Nick or simply devil. The naive, innocent, virginal girl who is usually possessed becomes merely a vessel through which God quenches his enemies. The green slime, self-inflicted wounds and the profane words becomes vital elements for us to see persons on-screen as ‘types’. Although Friedkin’s unsettling masterpiece “Exorcist” (1973) diffused layers of social elements into its narrative, it only reached its undiminished fame through the head-turning, spider-walk or green slime sequences. From then on, Hollywood has increasingly clinged on to certain elements that treats the so-called ‘possessed’ as mere pawns for providing entertainment.

The 2005 horror-thriller “The Exorcism of Emily Rose”, based on the true story of West German girl Anneliese Michel, uses the standard Hollywood ideas to showcase the struggles of a girl in strictly supernatural terms. Anneliese Michel’s death (1952-76) gained wide-spread media attention, which lashed at Church-approved old-fashioned exorcism rite (her parents & priest were proven to be guilty parties in court). It was seen as a vital case about misidentification of mental illness and religious hysteria. German film-maker Hans-Christian Schmid’s “Requiem” (2006) tries to rationally understand the conflicts that infested Anneliese. It may not have accurately followed the real-life tale, but displays unbridled empathy for its central character. “Requiem” is not a horror movie and stays away lousy sensationalism of American possession movies.

Michaela (Sandra Huller) is an intelligent 21 year old girl, who lives with her devoutly Catholic parents – Karl (Burghart Klaussner) & Marianne (Imogen Kogge) – and a younger sister in a small German town. She has dreams of going to a university and to become a teacher. Michaela is so happy to show her father the letter that confirms her place in university. But, her mother asks “How can you go with that ‘thing’? The ‘THING’ is referred to Michaela’s history of mental and physical breakdowns (epileptic seizures, grim visions). The god-fearing mother also thinks that nothing good would come out of a university education. However, with the support of her father, Michaela takes a dorm room and focuses on her course on Pedagogy.

Michaela’s social life in the city revolves around smart friend Hanna (Anna Blomeier) and a clumsy boyfriend Stefan (Nicholas Reinke). Michaela excels in studies, improves her looks and develops her dressing sense. She parties and likes the warmth of her boyfriends’ kiss. But, soon this sexual and rational awakenings negatively affects her, as she once again starts to have seizures and sees visions that calls her a ‘slut’. Michaela states that something is stopping her from touching the rosary and seeks the local priest’s (Walter Schmidlinger) advice, whose sane reply is “Who’s stopping you? The devil? We believe in him and in God too, but they are symbols, not literal things”. Nevertheless, a young clergyman (Jens Harzer) believes in the girl’s religious fear. There’s no uncertainty in what happens to Michaela from then on, but the girl’s downward spiral raises thought-provoking questions on religious faith and human reasoning.

The film’s narrative has been exclusively presented from Michaela point of view, which could have fizzled out, if not for powerful, incredible performance of Sandra Huller (her first movie role). Unlike the typical possession movies, we never get to see the vision that affects Michaela, so as to clear-away the supernatural underpinning of the tale. The intense suffering and uncontrolled energy must only be portrayed through emotions and Huller excels in this aspect. She not only captures the rage that stems from the disapproval of her god-fearing mother, but also displays the warm emotional core that really clouds our eyes with tears in the end. That final shot of Huller’s small smile & long gaze really gets at you and made me think that her portrayal is truly a ‘requiem’ to Anneliese’s memory. Two of my most favorite scenes, elevated by Huller are: the wildly erratic behavior she displays towards the end; over-excited dance movements in the club, which hauntingly exhibited the character’s need to cling to an identity or freedom. 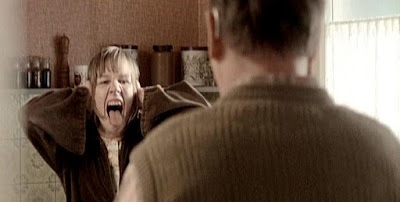 Director Schmid’s unsensational approach to the story puts us in the head of Michaela rather than anticipating a head-spinning moment. The narrative is not only devoid of supernatural presence, but also extinguishes far-fetched metaphors or symbols of evil. There’s no metaphysical vision or a subtly loaded film-maker’s opinion on religious beliefs. There are potential villains in the tale, but Schmid’s isn’t pointing out fingers; he remains staunchly subjective till the last shot. Apart from the lack of ‘visions’ Schmid even stays away from showing the exorcism sessions. The film’s chief objective is to show how compassion, the most significant element in all religions, is replaced by archaic thoughts. It condemns the acerbic judgmental attitude of the believers. So, if Schmid tried to extend the narrative till the girl’s death, he might have been accused for the same thing, he is condemning, i.e. being judgmental. Even though, Michaela’s mother disapproves her daughter in various instances, she is also shown as an individual capable of love. The muted tones and the hand-held cinematography may not satisfy those expecting visceral impulses. Schmid’s directorial signatures reminded me of Von Trier’s early low-budget works like “Breaking the Waves”, “Dancer in the Dark”, etc.

“Requiem” (90 minutes) is a brilliant character-driven film that depicts the agonies inflicted by dysfunctional religious and familial systems. It is a contemplative cinephile’s possession movie.

Requiem -- IMDb
at December 18, 2015
Email ThisBlogThis!Share to TwitterShare to FacebookShare to Pinterest
Labels: Based on True Story, Hard-Hitting Movies

I have not seen this one. I think I will like it.
But since you have a passion for movies, I am sure you will love reading my last post.
I just attended Dubai International Film festival and it is about that.