The Milk of Sorrow [2009] – The Blossoming of Enigmatic Fausta 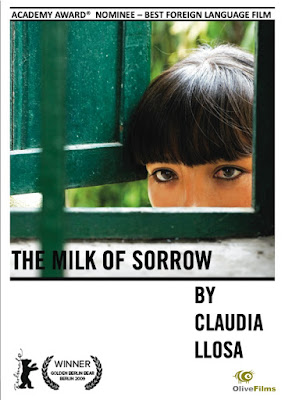 “I saw it all from your belly. I felt the slashing of your body. That’s why now I wear this, in me like a shield. Because only revulsion stops revolting people”


Peruvian film-maker Claudia Llosa’s “The Milk of Sorrow” aka “Le Teta Asustada” (translates to ‘The Frightened Teat’) is a fractured, bizarre and a beautiful film. It’s fractured because it is about a fractured society; the one in which the trauma of an era’s violence or sexualized violence still lingers. The woman born in this society doesn’t have much to inherit, except their mother’s persistent fear of sexual violence. As per the folk custom, these abused matriarchs pass their emotional bruises to female offspring through breast milk. Apart from the central metaphorical title, the film is riddled with other allegorical symbols (some forced & some subtle ones), but at the same time, there’s unbridled poetry in the images, which allows the viewers to connect simply on an emotional level. Yeah, your patience to take on a dismembered narrative would surely be tested, although for me it was a rewarding experience.


Armed conflicts between government and rebels have become frequent event in Peru, from the 1980’s. It is in the 1980’s, an armed Maoist rebel force named ‘Shining Path’ aka ‘Sendero Luminoso', started its fight with paramilitary and state forces. The Shining Path and their counterparts, however, only showed a blood path to the Peruvians. More than 70,000 civilians died in that early conflict (lasted from 1980 to 1992), in which mass rapes were used as a vital strategy by the army. Harvard anthropologist Kimberley Theidon’s book ‘Entre Prejimos’ is said to have vividly described the sexually abused women’s testimonials (the atrocities which often resulted in pregnancies). “The Milk of Sorrow” opens with the singing voice of an old, indigenous Peruvian woman, who sings about the traumatic experiences she endured in that period (raped and forced to swallow her dead husband’s penis). 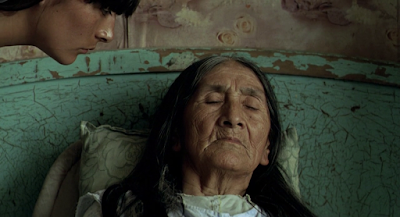 The old woman soon dies, passing down the suffering to her cowering young daughter Fausta (Magaly Solier). She is one of those unfortunate children, whom arrived into the world ‘without a soul because it hid underground out of fear’. Fausta has taken her mother’s dread so much into her heart that she has implanted a potato in her vagina to repel the ‘potential’ rapists, although it is a comparatively peaceful period in Lima – capital city of Peru. A doctor warns that using potato as a contraceptive device would kill her (potato has begun to take root and makes her bleed). Apart from that internalized fear, Fausta’s immediate problem comes over from her desire to give mother, a proper burial in the village. Her uncle (Marion Ballon), with whom Fausta lives, wants to bury the body in the backyard, since it would be too much to spend on coffins and other expenses. 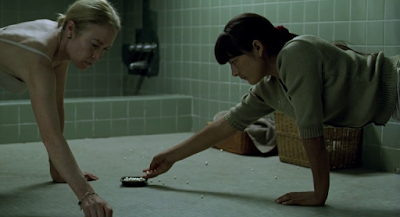 The uncle’s family is also busy with their daughter’s marriage, and so Fausta has to move her mother’s preserved body within that auspicious event. In order to cover the burial expenses, Fausta gives in and takes a job her aunt recommends. She works as a maid in ‘big house’, the abode of a wealthy & sullen pianist Aida (Susi Sanchez). Ms. Aida symbolizes the typical, exploitative bourgeoisie, who promises a pearl for every song Fausta sings in her beautiful, melancholic voice. The young woman gradually finds her inner voice too through her emblematic experiences in the house, which also includes meeting a genial gardener Noe (Efrain Sollis), who seems different from the predatory guy, she always envisions. Can she make gentle strides to overcome transmitted sorrow & neuroses? 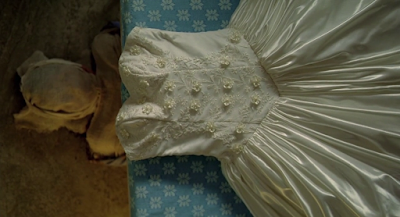 “The Milk of Sorrow” is a highly meditative character study that ends with a hopeful message (a water symbolism). The whole dealing with the ‘old wounds’ kind of story-line could have easily been transformed into a melodrama, but director Claudia sensibly concentrates on the hushed emotions of the haunted souls. Claudia Llosa’s narrative moves in a glacial pace, but what would test the viewers’ patience is that way each scenario is imbued into the narrative. On the outset, these scenes may seem to not provide an immediate emotional heft. Nevertheless, a deep, resonating emotional effect waits for those who could see through its layers of allegory and symbolism. Yeah, the symbolical visual imagery becomes too distracting at times (like the scene, when Fausta & her uncle sit on opposite points in a frame, separated by a large cloth in the shape of X; a large remote-controlled door that separates two different, fractured societies, etc), although it doesn’t threaten to derail the character’s tangible emotional journey. One of my favorite visual in the film is that of empty grave turned into a swimming pool (although I couldn’t fathom what it really symbolizes). 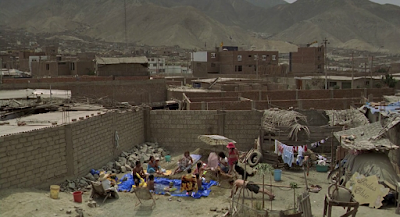 There’s enough emotional restraint Claudia displays with her intuitive frames (filmed mostly in medium or long shots) and in portraying the inner torments of Fausta. The slightly detached observational distance the director keeps leaves certain lurid things off-screen, but never lessens the impact on viewers. Fausta’s uncle & aunt work as wedding planners and the recurring iterations of the Peruvian marriage ceremonies illustrates the placement of traditionally unique rituals alongside the modernized attitudes. These insipidly jovial ceremonies also serve as a counterpoint to the emotional isolation that pervades in the society (symbolized in the scene, where Fausta & her family stand in front of a painted tropical background for a portrait). The rich Peruvian of European descent and the way she lures Fausta with pearls to gain access to the young girl’s songs could be taken in a more allegorical manner than a simple plotting device. In spite of the pressing images of magical-realism, the film could be termed as ‘obnoxious’, if not for the vacant, anguished eyes of Magaly Solier (she made her acting debut in Claudia’s first film “Madeinusa”). She impeccably wears the forced passivity of women, fearing mistreatment, but also brings out her emotional pain through those songs. 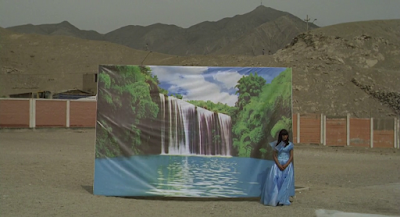 “The Milk of Sorrow” (95 minutes) is a restrained and arresting portrayal of emotionally injured women, in search of a curative process. Its heavier themes and symbolism-crowded images would demand from you a reflective mindset.