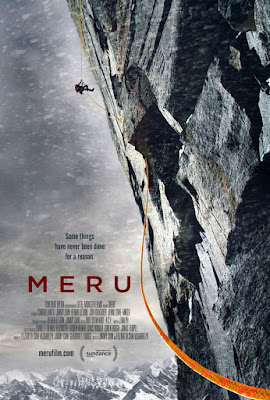 ‘Why the heck would these people their lives, among many other things, to conquer an uninhibited mountain?’ would be the unfathomable question in a non-climber’s mind. Jimmy Chin and Elizabeth Chai Vasarhelyi’s sublime mountain-climbing documentary “Meru” (2015) may not provide the perfect or easy answer to that question (“For the view” says a climber at one point), but it is highly fascinating to see the unyielding drive of a mountaineer to stand atop a near-vertical cliff, and to gaze at the purest of beauty that nature could offer. Apart from the eye-popping natural imagery, “Meru” has a binding human story at its core.


Professional mountaineers Jimmy Chin, Renan Ozturk and Conrad Anker has these significant urge that affected all the eminent human beings throughout the history: to transcend all the limitations. The limitation, in the case of the three mountaineers, is set by nature in the form of a 21,000 feet behemoth of a mountain named ‘Meru’. Although we might have heard numerous tales about the challenging climbs in peaks like Everest and K2, Himalayas’ Meru is said to possess the most dangerous ascent. Jon Krakeur, American mountaineer and non-fiction writer (“Into Thin Air”, “Into the Wild”, etc) nicely spells out the challenges while ascending through the unclimbed ‘Shark Fin’ line on Mount Meru. Unlike the climb of Everest, no Sherpa or fixed ropes could be used; there’s 1,500 feet of ice-walls and perilously shifting granite structure (where 200 feet climb per day is the possibility); and then there’s the unpredictable weather & human dilemma.

Conrad Anker, the most experienced climber of the three, has tried Meru on three occasions: 2003, 2005 and 2011. His last two expeditions are covered in the documentary, in which Jimmy Chin and Renan Ozturk have joined him (these three guys have climbed Everest several times; Jimmy even skied on top of the Everest). For Conrad, it’s like unfinished business since his mentor Mugs Stump died before conquering the undisputed Shark’ Fin (in 2003). Conrad has a concerned wife, Jenni & three sons, in Montana and is also haunted by the death of his beloved friend Alex Lowe (died in an avalanche). Jimmy Chin, Conrad’s long time climbing partner, is one of the much sought-out adventure photographer (his photos are in magazines like “National Geographic”, “Outside”, etc). Renan is a new-comer in the team and leaves behind caring girlfriend (and a dog!). 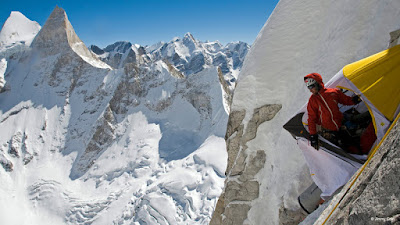 As the three alpinists start their ascent from the piercingly beautiful ‘Gangotri’ in 2008, their hitched cameras film every grueling step. The climbing of Meru was originally planned as seven day trip, but bad weather keeps them at the task for three weeks, sleeping in a cramped tent that just hangs like a tea bag. In the end, due to depleted food sources and insurmountable risks, the trio makes a heart-breaking decision to go down, with only 100 meters left to conquer Shark’s Fin of Meru. It then takes three years for the alpinists to once again climb the punishing altitude. In this 3 year time, Renan and Jimmy faces near-death experiences in their profession (one endures a skull fracture, while the other has miraculously survived an avalanche), which makes them contemplate a lot. Conrad is caught between his familial obligations and incredible-draw of Meru. What these three men achieved in the end couldn’t be fitted into a mundane adjective, since it’s not just the hazardous granite structure they had to conquer; they also had to defeat the heaping debris of human dilemmas. 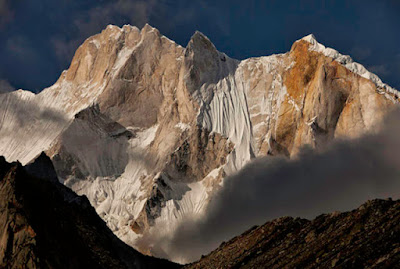 Jimmy Chin’s camera doesn’t try to induce the proverbial chest-thumping moment into the joruney. He is primarily focused on the anxiety, doubts and incredible supercharges of a mountaineer. The thoughts about weight of gear, depleting food, the guilt over leaving one’s family are always depicted to be on the back of alpinisits’ mind. The trio plus Jon Krakeur clearly explains how there is great professionalism and perfect assessment of risks involved, in what’s generally perceived as a no-holds-barred, death-wishing sport. The intimacy with which the directors Jimmy and Elizabeth (Jimmy’s wife) have approached their human subjects is as compelling as nail-biting climbs. The driving elements of the trio, namely loyalty, friendship, and unwavering obsession (which even ask them to forget loved ones) are finely brought out. Yeah, at times, there’s too much of philosophical musings that lacks spontaneity (especially from the colorful words of Krakeur) but that doesn’t lessen the empyreal effect provided by the images.

“Meru” (87 minutes) is not just an account of three mountaineers, scaling the unattainable. It is a testament to the triumph of indomitable human spirit.