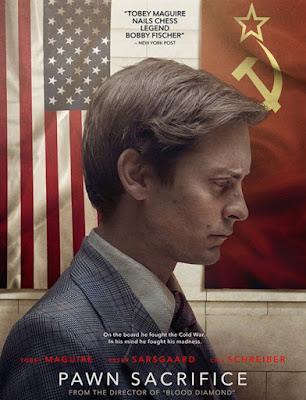 “This game…it’s a rabbit hole. After only four moves, there are more than 300 billion options to consider. There are more 40-move games than there are stars in the galaxy. So, it can take you close to edge”.

It is futile to watch a game of chess (at least for me) and to understand what’s going to happen or who’s going to win. May be because there’s not enough flexing of muscles or grueling clashes involved. And, yes to simply call it a game would diminish the description of Chess. It not only demands unwavering concentration, but also exacts for a genius mind to know one’s own moves and anticipate the opponent’s. The mistakes could be made within a flash of a second and the defeats are immediate. The mere thought of finding out ‘the perfect move’ is enough to send one’s mind over the edge, and the game of Chess, is indeed riddled with great players, who spiraled down due to mental problems. Edward Zwick’s “Pawn Sacrifice” (2014) tracks down one such genius & delusional mind that graced international chess, Mr. Robert James Bobby Fischer (1943-2008).

The film rather than being a biopic of Mr. Fischer is just presented as a dramatization of the events leading to 1972 ‘Match of the Century’ between Russian Boris Spassky and Fischer. When “Pawn Sacrifice” opens Fischer (Tobey Maguire) almost seems to be a representation of American Cold War politics: dreadful, delusional and cocksure. He is in an isolated hotel room in Reykjavik, Iceland, dislocating the panels and telephones of the room, in search of a bug. The news report announces that the famous American chess player has forfeited his match with Russian Grand-master Boris Spassky (Liev Schreiber). Then, the narrative switches to concentrate on Fischer’s childhood, who is photographed by men in Chevy (the FBI), while his mother is hosting parties to her communist friends (& whispers in Russian). Raised by a single, Jewish-Communist mother (Robin Weigert), Fischer learned to predict whether he is being surveilled or not.

As Fischer grew in an environment of fear & suspicion, the American political entropy also grew in parallel (and both reached its threshold, insanity point). Of course, Fischer’s paranoia wouldn’t have ever been a talking point, if not for his genius abilities, displayed in the game of chess. Fischer’s rise to one of the youngest best chess players is narrated in a phenomenal manner. There are also few hints about his obssessive talent and reckless behavior in these early episodes. By the age of 16, Fischer is left to fend for himself and by early 20’s, the strains of fame and sense of paranoia affected so much that he announced to quit from the game. Later, a patriotic lawyer (Michael Stuhlbarg) and a priest (Peter Sarsgaard) come together to make the genius play and win the championship title against Grandmaster Boris. Fischer, as expected, keeps on oscillating between genius and madness. Similar to the outerspace rivalry between US and Soviet Union, the chess championship (of 1972) was also construed as war of intelligence or ideologies (Russian dominance in chess during that era was exceptional). 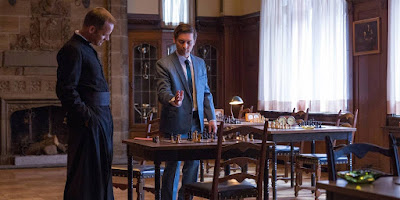 Director Edward Zwick loves to build a dramatic narrative from historical stories (“Glory”, “Last Samurai”, and “Defiance”). So, he is quick to find a historical context to the intercontinental chess match. The coldness of the playing room, hushed voices, and swift moves almost emulates US & Soviets’ desire to humiliate each other. At every turn, Zwick imbues a line like “We lost China, we’re losing Vietnam, we have to win this one” to insist on the importance of 1972 match, from the historical perspective. Yes, these kinds of gung-ho statements are no way subtle and seem patronizing. And, yes there’s a typical ‘on-the-face’ shots of Nixon and Brezhnev, eagerly watching the Chess match from their respective suites (I’d like to see this leader’s reactions while watching the famous ‘40-move’ game). Such narrative elements, including the barrage of news reports, appeared to change the movie’s course into Rocky territory (the fight with Ivan Drago). Thankfully, Zwick strays a lot from using the typical rivalry narrative.

Despite that aforementioned jingoistic vibe, Zwick manages to avoid cold-war cliches. He attributes the feverish following of Fischer to the inherent jingoism, kindled by politicians and media (there’s a passing reference to what happened to Chess legend once the Cold War fever died down). The director also doesn’t try to convert Boris into Ivan Drago of Chess. It is a fairly nuanced portrait of the Russian Grand-master (and thankfully Boris doesn’t speak in accented English). There’s an odd slow-motion shot of chess pieces being moved or the shots of crowd wildly celebrating, but for the most part “Pawn Sacrifice” doesn’t try to be a conventional sports drama (or an emotional trickery). The all-important big match was well conceived by Zwick and he gets to the heart & soul of the game. But, still nothing could come close to the real game played by Boris and Fischer (watch it in the 2011 documentary “Bobby Fischer Against the World”). 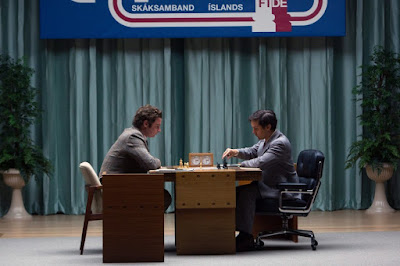 The script by Steven Knight (“Locke”, Eastern Promises”) & Co. could have delved deep into the Fischer’s ‘so-called’ mental problems (or may be it is Zwick’s rational direction that hasn’t profoundly handled the characters’ psychological underpinnings).  Fischer’s majestic talent was overrun by his absurd, ludicrous claims, but when Tobey Maguire’s Fischer enlightens the genius side, it is a marvel to watch. Tobey brings out the genius’ ferocity, energy and insecurities without doing a smear job (although Tobey is too short to play a towering guy like Bobby Fischer). Sarsgaard once again proves that he is excellent, when playing a solemn and thoughtful character.

“Pawn Sacrifice” (115 minutes) is a captivating portrait of the indivisible madness and brilliance of a Chess legend. Watch it for its array of impressive performances.

Pawn Sacrifice -- IMDb
at December 12, 2015
Email ThisBlogThis!Share to TwitterShare to FacebookShare to Pinterest
Labels: Based on True Story, Hollywood Movies