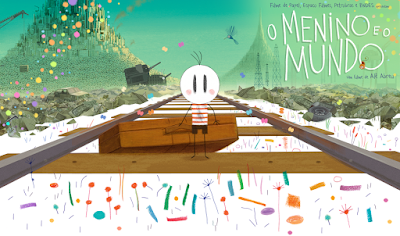 Untamed abstract images has little place in movies, especially in animated features, which is often misunderstood as a medium for buffooneries. Brazilian animator Ale Abreu’s Oscar nominated feature “Boy and the World” (aka ‘O Menino e o Mundo’, 2015) never loses its fervent, abstract imagery (that is on par with visuals of Renee Laloux) to settle into a semi-realistic narrative. The plot is not just minimal; it barely exists (and nothing much is said too). An innocent village boy, dwelling in a planet with two moons, strays away from home in search of his father. But, what he founds is sea of inexorable landscapes, where the warmth of humans floats like islands, amidst the industrial monstrosities. It is a typical animation movie conceit that was recently used in Pixar’s “The Good Dinosaur” and to even say that ‘there’s nothing new about this plot’ would seem like an archaic sentence. Nevertheless, the way this super-minimal, contemporary allegory divulges on-screen is nothing short of a wonder.

The ‘boy’ isn’t drawn imbuing the characteristics of obnoxious kid. A circle is drawn for a head that is topped with wacky hairs and two vertical black-colored slits for eyes. Five red lines make up for a striped tee-shirt. The ‘boy’ just looks like a sketch taken from the drawings of a five-year old. But the character expresses pluralities that couldn’t be found in a traditional 3D animation feature. The film opens a blank white space, where the boy’s imagination fills the idyllic rural place with astounding, kaleidoscopic imagery. Ale Abreu’s drawings of the rural place, done with crayons and other drawing tools used by kids, may not be as detailed as that of Miyazaki’s frames, but its riot of colors brims with a positively infectious energy. As the boy drifts away to city, in search of his father, he encounters a humongous, soulless cotton industry, where agricultural workers’ resemble the movements of sullen proletarians in the German expressionist masterpiece “Metropolis” (1927). 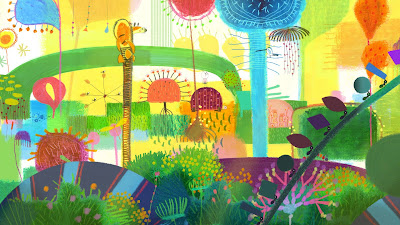 Since we experience the boy’s journey through his eyes, the cotton fields are initially are seen as a big stage, where the workers and trucks move as if dancing a waltz. Gradually, the boy’s wonder is equally occupied with sense of fear and terror as the landscapes are increasingly filled with circumscribed buildings. When the boy searches for his home and meets two different personalities in the city, we expect the narrative to shed off its abstract visuals and embrace the conventional. In contrast, director Ale never shelves the kid’s picturesque experiences, despite imbuing a striking sociopolitical comment about migrant laborers and depletion of our environment. There’s a distressing montage that showcases the plundering of our planet’s resources, which doesn’t come off as false transition. Ale has cannily set off this mood of melancholia from the initial frames, so that the montage only seems like an expansion of his themes. 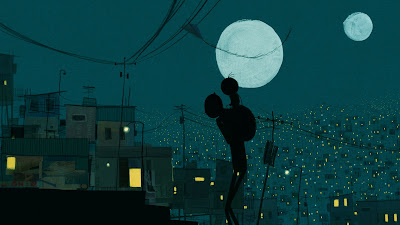 A majority of Ale Abreu’s drawings are superb enough to be framed and hanged on a wall. The way he elegantly waltzes through the spacial designs of a jungle or the manner with which he stages the byzantine cityscapes are so rich and layered. The aural variety Mr. Ale offers smartly captures the contrasting liveliness of a natural world with that of the emptiness of urban frenzy. Even when Mr. Ale takes a god’s eye view to exhibit the delirious environment, his images find hope and happiness; and even when the cruelties of humans’ flows like a torrential rain, he brings in a certain playfulness and experimental attitude to keep both the kid & grown-up within us glued to the screen.


Does the film talk about the social and economic realities of Latin America? Does it boast a populist or a Marxist vision? Yeah, may be. But, nothing feels blandly sequential or box-ticking. The characters and backgrounds seem to have an organic flow and a unique influential style. The curated musical score blends perfectly with the diversity of colors and places. Films constructed with unadulterated abstract images may lose our attention at some point. But, thanks to a running time of 75 minutes, our mental interest in the boy’s journey remains unaffected. Many might have the question about what happened in the end. Is there any literal explanation for the final sequence of images? Yes, there is; if you look closely you can find it. However, there is a ‘Zen-like’ quality to the ending visuals that a mere explanation could be an act of betrayal. Just remember that there is always hope for humanity, whenever music flows and green plants spring up.


“Boy and the World” (2015) is one of the most prettiest and thoughtful animated features ever made. Its sheer inventive, minimal visual style will be talked about in the near-future.

Beautiful! Makes me nostalgic as it reminds me of the days when my twins were toddlers and loved watching Oswald et al.