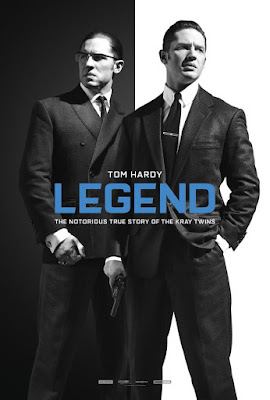 Whenever the award season arrives, we search for amazing performances that weren’t given its respective award statues. There’s an inherent urge as a cinephile to proclaim about such noteworthy acting. Tom Hardy in Brian Helgeland’s gangster biopic “Legend” (2015) makes us do that. Hardy, here, play not one but two major roles: as ruthless real-life mob twins – Reggie Kray and Ronald Krey. He imbues sharply differing personalities into both these characters that gave me a feeling of watching a spectacle. Half-way into the movie, Reggie and Ronnie, interact furiously by exchanging few cockney swears, which gradually evolves into hard punches. Apart from the stupendous technical wizardry in that scene, I saw a performance which made me forget that it is played by the same actor. And, Hardy hovers over the narrative like a giant statue, so much that the script pales in comparison. American film-maker/writer Helgeland admittedly glamorizes or glosses over Krays’ crime life, but that’s something we often encounter in mobster movies. The real problem is that it is tonally jarring, muddled and remains flatter in the second-half, despite all the talents involved.

“Legend” rejects the typical ‘rise of the gangster’ narrative arc and rather starts in 1960’s, when the Kray brothers have already established a base camp at Vallance, London East End. Now their aim is to build a crime empire to take over whole of London. The extortion and protection rackets are the usual businesses for the club-owning twin brothers. They rub shoulders with every prominent individual of London: singers, actors, politicians, etc. The pair’s over-the-top celebratory parties and increasingly daring ventures, as usual, made them the targets for other gangster and good detectives, like Superintendent ‘Nipper’ Read (Christopher Eccleston). 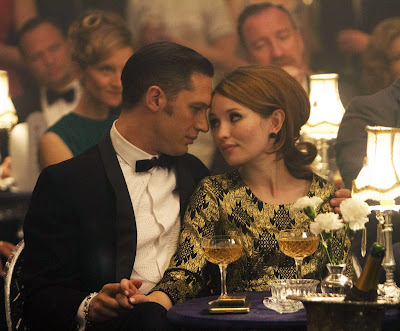 Ronnie is a certified paranoid schizophrenic. Reggie is more multifaceted: he could be vicious as well as suave. Reg becomes romantically involved with a beautiful, yet fragile girl Frances (Emily Browning), which imparts a little friction between the brothers (she is also the film’s moral compass). The American mafia that’s so convinced to do business with the Krays are a little wary of Ronnie; not just because, he has openly professed his homosexuality (in real life Ron was Bi-sexual), but also there is a volatility in him that ends up demanding blood. Of course the collapse of their empire is inevitable, set in motion by Ron’s erratic behavior, although what’s interesting here to see is the symbiotic relationship between Reg and Ron; the brotherhood which binds as well as damages them. 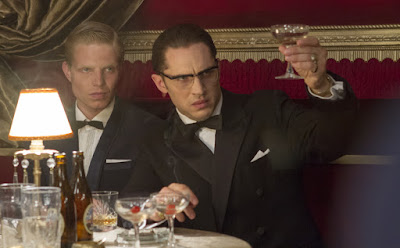 Emily Browning’s Frances narrates the plot and she gives an emotionally engaging performance. Her narration would have been a perfect stand-in for audience view point. But, this is a film owned by Hardy, so her carefully crafted words seem peripheral to the central events, unveiling around the Krays. It looks like Helgeland was torn between telling the tragedy of a woman, ruined by Krays, as well as enamored by the magnetic aura surrounding the twins. The end result is that the twins win over majestically and so Frances’ perspective doesn’t seem as organic as it wanted to be. The panache in Helgeland’s visuals could make us accuse him of glamorizing crime lifestyle, but he makes a point by stating that London was ruled well-educated politicians, judges and businessmen, who are more corrupt and hypocritical than the Krays. So, the glamorization doesn’t come from the vantage point of the director; it was derived from how the high society saw the twins during the 1960’s.


Nevertheless, the director could be called out for entertainingly showcasing the violence (the violence that had happened to real people). A kind of jolly mood prevails over the violent scenes (and even at the orgy scene, where underage boys were used for the pleasure of VIPs). The situation surrounding the murder of George Carnell and ‘a paranoid schizophrenic walks into a bar’ joke amply satiates our thirst to see a well-executed, darkly comic sequence, but Ronnie – whom we would deplore and call as ‘monster’ in real life – kind of comes off as a star (than a ruthless criminal). Reggie’s portrayal, however, is more balanced. There’s a hint that Reg could be as ruthless as Ron in threatening innocent passerby, which absolutely culminates in the bloody, ending sequence, making us jolt with shock. Even though Ron is hilarious; Reg comes off as the only multifaceted character. He is like a Scorsese ‘gangster’ hero. The way Reg seamlessly fulfills his boss role and transforms suddenly to be a lover, in that club scene works like a tribute to Scorsese’s profound characters (there’s also another Scorsese tribute, in the scene involving Krays’ over-protective mother). 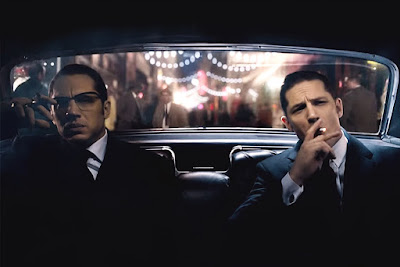 “Legend” (130 minutes) is structurally flawed to be a excellent gangland picture, although it is worth a watch for Hardy’s wildly entertaining, soulful performance. While frightening one foe, Hardy’s Ron says “I can’t look at you, I’ll get lost in your eyes!” That’s exactly how the central performances make us feel.