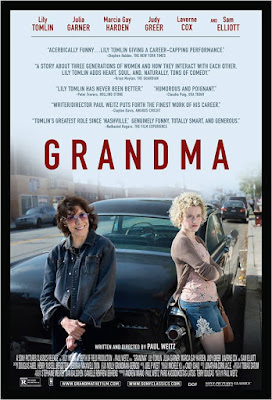 It is really interesting how Paul Weitz’s comedy/drama “Grandma” (2015) starts. We see a 70 year old woman, a bit tired, in a house stacked full of books, where credit cards are chopped up to adorn the wind chimes. But, this isn’t about a 70 year old dying woman, who is saying ‘Fuck the world, I’m dying’. This is a septuagenarian, who is getting out of (4 month) relationship with a younger woman. Her long-time partner (of 38 years) has died and she has started dating this younger woman, feeling vitality and resurgence of creativity. However, there is an anger within her; may be because it comes from the thought of forgetting the old partner, or simply from the fact that she itself is getting very old. Whatever it is, this 70 year old woman delivers one of the best break-up lines in cinema: “You’re just a foot note”. And, of course by the end of the film, this acerbic old woman gets a ‘karma boomerang’. But, what’s so interesting about an old gay woman, getting emotionally beaten-up in her waning years? For one, this septuagenarian, Elle is played by whip-smart Lily Tomlin and this isn’t an insensitive, gross-out comedy. There’s a subtle gloominess and elegance to “Grandma”, which turns it into a crisply-scaled character study.

Lilly’s Elle, after breaking-up with Olivia (Judy Greer), flips through happier memories and well-preserved artworks of a child, and just at the right time, she receives an unexpected guest: teenage grand-daughter Sage (Julia Garner). Sage, who is afraid of her super-lawyer mother Judy (Marcia Gay Hayden), seeks the help of Elle to get an abortion. The appointment is set nine hours, from the time Sage has shown up at Elle’s doorstep. Six-hundred dollars is needed to go through the procedure and Elle, a once-famous poet and a casual academic writer-in-residence, has only $43 dollars. There’s only one way ahead: Grandma Elle starts up her old Dodge and hits the road with Sage, hoping to meet up with old friends and flames, who may lend some cash. What follows is episodic vignettes, where the little trip shows Sage, her grandma’s worst behaviors and hidden vulnerable side. And, the high-schooler too learns few ironically humorous wisdom of life from Elle.

There’s nothing new about the plot structure or central themes dealt in “Grandma”. It could be seen as the schematic, interpersonal drama, where old stars (like Sam Elliott, Elizabeth Pena) play guest roles in each vignettes. Nevertheless, what imbues an organic flow to the script is based on the manner, the writings reveal emotional depths at key moments, and in the way standout performances are extracted by director Weitz – from central characters to the ones who share small screen time. Sam Elliott plays the role of Elle’s long-ago lover, Karl. It would be cliche to even call this role as a cliche. But, within that short screen time, Weitz establishes a character for Elliott, who transforms from being charming, teasing and finally heartbreaking. It is the kind of scenario, which rather than just solely showcasing the flawed nature of Elle, tries to understand the anger and frustration of a very minor character named Karl. “Grandma” is filled with such little, wonderful, aching moments.  Yes, these scenes are modestly staged and may only have modest impact upon its viewers, but the maturity with which the characters are approached here are something rare. 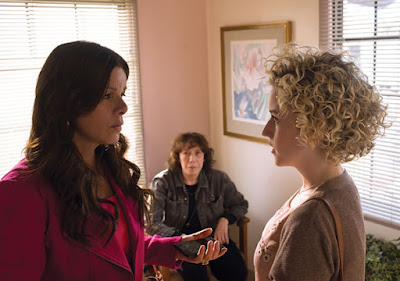 Writer/director Weitz, apart from imbuing a well-saturated tone of melancholia and regret, excels in pushing the wry ferocity of Elle’s character nature to create hilarious, crowd-pleasing sequences. Elle’s encounter with Sage’s wacky boyfriend (Nat Wolff) [“Your face looks like armpit”] and the way she rattles off insults in cafe and bookstores with a killer timing are a joy to watch. The irresponsibility arc that flows from Elle (aching over her own pains of abortion) to Judy (who pays more attention to work than her daughter) to Sage (who is as acerbic and reckless as the two) is paid good, subtle attention.  Another, unexpected and well-handled aspect of the film is how Sage’s abortion is neither downplayed nor dramatized for issuing a sweeping statement. Paul Weitz, who usually fluctuates between ridiculous (“American Pie”, “Admission”, “Little Fockers”) and high-minded (“About a Boy”, “In Good Company” and also directed “Mozart in the Jungle” episodes) movies has now perfectly chosen a more tidy, indie-film route without making any major, maudlin statements. Eventually, one has to agree that the film belongs to Lily Tomlin and without her bravura acting skills, all the episodes would have come-off as cutesy. Within those barrages of cheeky dialogues, Tomlin finely taps into Elle’s measured sorrow, vulnerability and regret. 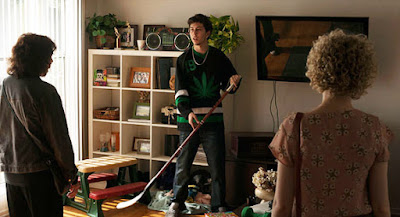 Wow! The premise of this film is superb. I do hope I get to watch it soon.