The Fencer [2015] – A Conventional Drama Salvaged by Winsome Kids 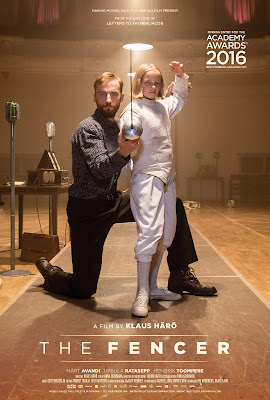 Finnish film-maker Klaus Haro’s Estonian/Russian language movie “The Fencer” (2015) [Finland’s entry for Foreign Language Oscars) could be easily understood without the English subtitles. It’s not that this is a movie that relays its themes through sequences of stupendous imagery; it is just the kind of film that employs familiar tropes which you might have seen in at least dozens of Hollywood movies. “The Fencer” is box-ticking in various ways: Did this have a handsome protagonist in a state of quandary? Yes. Does this film have a beautiful actress who only serves as hero’s romantic interest? Yes. Is there a cute kid in the narrative, who sees our hero as a father figure? Yes. Does the script include a despicable sycophant, who is intent in maintaining the status quo? Oh yes! Despite such fairly predictable and little annoying plot structure, there is something positively infectious about watching an ‘inspirational’ drama, where world-weary, but wide-eyed kids eagerly wait to learn a path of virtue from the grown-ups. That is what made me to forget that “The Fencer” is an Oscar entry movie from a country that makes profoundly-layered films and also to forgive its conventional script (only to an extent).

The film is partly based on the plight of champion fencer Mr. Ender Nelis. He was drafted by Nazi Germany during its occupation of Estonia in World War II. When Soviet Union boasted its power on Estonia after 1945, Ender had to run into a small town in the Baltic region, where the inquisitive eyes of KGB might not reach. The fact that the film’s protagonist is a man ‘on-the-run’ is established in the opening shot as Ender Nelis (Mart Avandi) is followed by the camera, while walking through a bedraggled Soviet-Union controlled Estonian town named Haapsalu. It is early 1952 and Ender ends up taking the jobs as sports teacher in a school, where the meager sport equipment are often shared with military facilities. Nelis couldn’t stand the propaganda recitals of head-teacher (Hendrik Toompore) and also isn’t good in handling children. 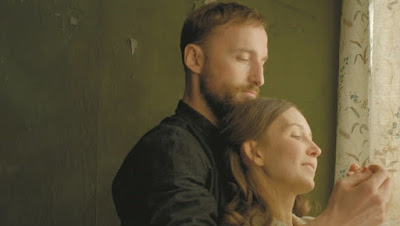 A cute and curious little girl Marta (Liisa Koppel) and a sulky teenager Jaan (Joonas Koff), who lives with his grandfather (played by “Tangerines” fame Lembit Ulfsak) changes our protagonist’s constricted attitude. And, of course there’s an attractive, fellow teacher Kadri (Ursula Ratasepp) who provides ample motivation for Nelis. Despite the tyrannical head-masters’ warning that fencing is an elitist and anti-socialist sport, Nelis includes fencing courses in his sports club. The eager kids, in order to be liberated from the gloomy life (most of the kids have lost their father or both parents to the war), embrace Nelis’ fencing classes. Due to the lack of equipment, the students simply use sticks. As the head-master begins digging into Nelis’s shadowy past, the school’s fencing team gets an opportunity to participate in a national competition, held at Leningrad, which for Nelis would be like voluntarily entering into ‘Lion’s den’. 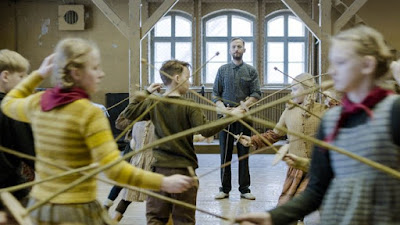 As I mentioned, the script (written by Anna Heinamaa) moves with little surprises and settles on a conventional formula, although it hits the right notes from a simple, emotional front. The children Jaan and Marta makes up for the movie's emotional core and the kids’ lucid performances attracts our attention. The drab palette used to denote the broken-down Soviet society provides enough atmospheric help to root for the underdogs’ battle. The final sports sequences at first looks like a boiled-down version of “Karate Kid”, even though it’s captured better by avoiding faux, chest-thumping emotions. The final sequence also pits Marta against a big & skilled city boy, which is an obvious metaphor for Endel Nelis’ struggle against the intimidating bureaucratic machine. Apart from the predictability factor, the one galling phenomenon about the film is that we never get to know about Mr. Nelis’ and his motivations. He is heroic and says the usual words like “I have been running all my life”. Avandi, who plays Nelis looks and perfectly plays the part, but what makes this fencing club founders’ life different from the usual taciturn-loner-turned-inspirational-figure?


“The Fencer” (95 minutes) is a well-crafted, fairly entertaining, but a very predictable ‘David-Goliath’ drama. It will be remembered as the film that made into short-list of 2016 Golden Globe nominations and long-list of Oscar nominations and apart from that it has nothing unique to remember.

That is a rather intriguing movie about a cute protagonist with a saber. I might watch it soon, thanks to your fine review.