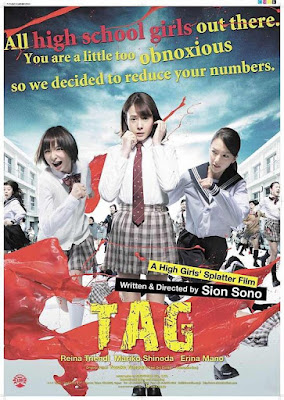 Sion Sono has been devising his incendiary, shocking and seminal works in the Japanese film landscape for the past three decades. He can explore Japanese society’s connection with natural disasters (“Himizu”, “The Land of Hope”) or gaze into its purely diabolical side (“Love Exposure”, “Cold Fish”, “Guilty of Romance”, “Suicide Club”) or concoct invigorating, blood fest films (“Why Don’t You Play in Hell?”, “Tokyo Tribe”) or bewilder us with shockingly surrealistic flicks (“Strange Circus”, “Exte”) and could  also spin minimalist fantasy, sci-fi yarns. He is adorned with words like ‘auteur’, iconoclastic ’, ‘mad geniuses' and also cursed as ‘psychopath’, ‘pervert’ (a list of other unsavory words are used). Whatever is said about him, Sion Sono only makes films he genuinely wants to make. For movie-lovers, he offers no middle ground: its either you hate his works or love it. The same thing applies for Sono’s eccentric, bloody and beautiful “Tag” (aka “Riaru onigokko”, 2015). Here, the punk-auteur imbues all his trademark elements as well as tries to push his cinematic boundaries. It is a gory, entertaining chase movie laced with a creatively cynical social commentary (a critic perfectly called it ‘Truman Show on acid’).

The early few frames of the opening sequence in “Tag” seem to possess elements of a high drama. Two busloads of giggling Japanese high school girls are on a trip. As sun-lights glistens inside the bus, we can feel certain sweetness. As the girls are playfully beating each other pillows, our protagonist Mitsuko (Reina Triendl) writes on a poem in a sedate manner. A friend gently jabs at Mitsuko and her pen falls down. As she bends down to pick it, a deadly wind symmetrically slices the two buses. So deadly that the giggling girls are slashed to two, appearing like leathery cocoons of ‘Alien’ eggs. Few passersby too meet the same gruesome fate as only Mitsuko survives. She runs for help, but strangely she runs into her classmates, who are well and alive. She thinks of the earlier bloody event as a dream, although her memories about school life are also limited. 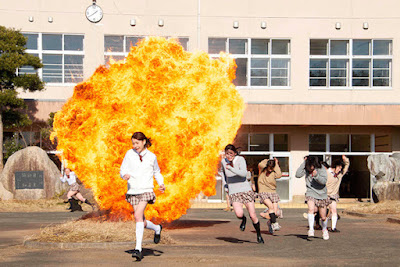 Mitsuko’s best friend Aki (Yuki Sakurai) tries to ease the panicked girl. Aki explains the rhythms of their school life and along with two other pals Sur (known for her affinity to surrealism), Taeko, they ditch the first class. The four run to the calm shores of a lake discussing on free will and force of spontaneous actions. Sur offers a lot to contemplate. She states a theory of parallel universe; advice to Mitsuko “Life is surreal. Don’t let it consume you” and also warns her “May be our destiny is decided. We’re trapped in it”. There’s something ominous as the girls return back to school, only to discover the makings of another massacre. Mitsuko runs and runs chased by this excessive, nonsensical violence. Surreal, at times, would seem so simple a word to describe what unfolds. And, the primary fun in “Tag” is watching Mitsuko tripping into rabbit holes of gory, surrogate nightmares. 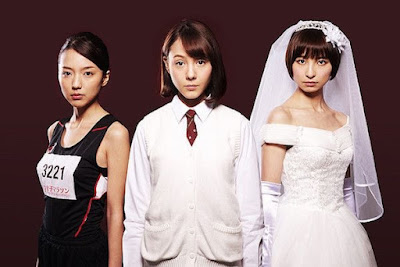 “Tag” is one of the half a dozen movies made by Sono in 2015 (all of the six films are said to use a variety of cinematic languages). Even after considering the budgetary and time limits, “Tag” doesn’t feel rushed off. It isn’t devised as a film for his fans to say ‘how cool this guy is’; it withholds some serious, smart commentary within what looks like a bloodstained superficial yarn. Of course, the film has quite a few unsatisfactory elements, but director Sono’s ability to weave outright craziness as well as understated social content is to an extent, seems very admirable. 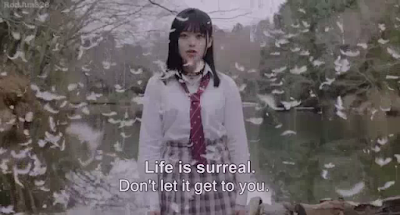 Sono has based his script on Yusuke Yamade’s dystopian novel. The novel has already been made into a blockbuster film (in 2008). But, Sono loads his own original ideas into the familiar premise (he even claims to have not read the novel before the shoot). Among all the blood sprays, there is a Sono-esque query about reality, ego, identity and fate. In the narrative, Mitsuko transforms into Keiko and then later to Izumi (three different actresses play the central, transformed character, which is something Luis Bunuel employed in his surrealistic “That Obscure Object of Desire”). The one common element that underlines the three characters is their necessity to run in order to survive or exist. So, along this existential trip, Mitsuko metamorphoses from being a passive girl to a reactionary woman (Keiko) and further metamorphoses to become a woman (Izumi), who shapes her very own fate or destiny. The strikingly odd Sur mentions “May be our destiny is decided” (the falling of feather becomes a recurrent visual motif). 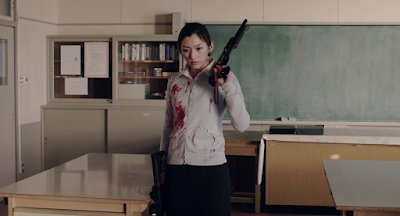 The absence of men, for the most part of narrative, plus the presence of eccentric stripping women easily shows, whom Sur means when she says ‘our destiny’. So, the character transformation of Mitsuko, apart from being idiosyncratic, also becomes a woman with a mission. The mission is to change her own existence in order to break out of the misogynistic cycle, created by few deplorable men.  “We are not things” stated a pronounced feminist undercurrent in the fascinating blockbuster “Mad Max: Fury Road”. “Tag” has a similar undercurrent, where its protagonist spews out the line “Don’t play with us like toys”. From this interpretative point, Mitsuko is not only running away to change her fate, but also from unsavory male desires and their contrived societal expectations. The characteristics of Aki, Mitsuko, Sur & Taeko and their cherubic friendship are attributed as a singularity in Sono’s universe, whereas all the different degrees of strangeness are attributed to prevalent gender-oppression, diffused from the minds of the particular game-designers.

Amidst all the gonzo and extremity, Sono offers few lighthearted and reflective moments to imbue this particular theme. On a base level, Mitsuko’s journey offers ample violently funny (aka batshit crazy) sequences to engage the viewers of this limited genre, while at the same time, it also ends up being self-conscious about viewers’ enjoyment of on-screen exploitation. Sono, in a way self-criticizes himself as well as array of movie, video game makers, whose burgeoning sale tactics are based upon objectification of women. In the end, the up-skirt panty shots, the short skirts, the stripping and annoying giggles are provided a context, although we can’t entirely dismiss that these elements aren’t used for mere titillation.  And, yes the director deals the aforementioned themes in a little on-the-face manner. The repetition of certain dialogues seems redundant as if trying to force in on the point. But, it is also vital to understand that “Tag” is primarily a bloody, darkly comic, chase movie and so its narrative allowing enough breathing room for dealing subtext is itself a surprising factor.


In an interview, Sion Sono was asked about the quick succession of his films. For which he answered: “In my own personal way of thinking, I look at movies like songs. With an album you have about twelve songs, so I figure; why not have twelve films in a year like twelve songs in an album? With an album, of course you get some good songs and some bad songs, but I think by making so many there’s going to be something good that comes out of it, and I think that’s really the way that films should be.” From that perspective, “Tag” really transcends and achieves a lot from what could have been a tedious genre exercise. I see “Tag” (85 minutes) as the confluence of Sono’s unhinged rage and finespun psychological insights.

Surprised to see the review of a sonO sion movie from tamil nadu.nice detailed review. See the film PORT OF CALL 2015 and post comments.I also ran a blog www.kamerabuff.blogspot.

Thanks for the comment. Will soon see 'Port of Call'. Looks like an interesting movie. Ur blog is good. Update more.