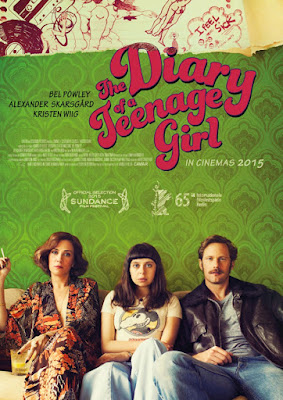 “I had sex today. Holyshit!” are the first lines of Marielle Heller’s protagonist Minnie Goetze in “The Diary of a Teenage Girl” (2015). A deluge of excitement and bewilderment exudes from the 15 year old Minnie’s face as she says those words, walking through a resplendent sun-drenched 1970’s California Park, populated by hippies & nudists. “Diary…” is a different kind of ‘coming-of-age’ story on various fronts: it takes a very personal female perspective; there’s no judgmental or a moralizing take on the central, inappropriate affair; and it is dauntlessly frank about Minnie’s carnal desires (there’s a lot of nudity and sexual content, depicted in an un-Hollywood manner).

The 15 year old Minnie (Bel Powley) confessing that she has just lost her virginity may not be as disquieting since this was the era when there was a shift in the American sexual attitudes. But, what makes Minnie’s sexual awakening problematic is that her liaison happened with a much older Monroe (Alexander Skarsgard), Minnie’s mother’s boyfriend.  British film-maker Andrea Arnold’s gritty feature “Fish Tank” (2009) depicts a similar kind of encounter, although it gradually builds up to that encounter. In “Diary…” the development is rapid and straightforward. In the opening sequences, Minnie is asked by her substance-abusing, irresponsible mother Charlotte Goetze (Kristen Wiig) to go out with Monroe. He takes her to a bar. Minnie, who has daydreams about Monroe, does an inappropriate thing, for which he says something more inappropriate, and then she uses the f-word in a totally sexual context. 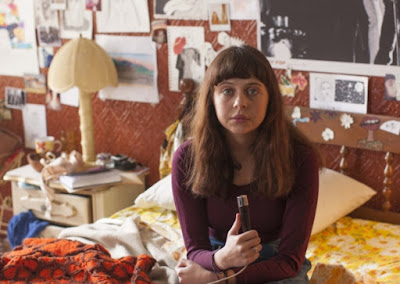 Few days later, Minnie sits in her room, gazing at the dried blood under her nails, and begins her audio journal, vividly explaining the carnal education and the joy of losing virginity, made possible by Monroe. Minnie has this mix of precociousness and child-like honesty, which makes audio entries incendiary as well as authentically unfiltered. Minnie’s mother, more or less, behaves like a teenager, by partying hard. When Charlotte is sober, she talks about how she was ‘piece’ as a teenager. What is supposed to be a one-time thing between Minnie and Monroe persists over a period of time. However, this isn’t the kind of film where the director posits like a tiger, waiting to pounce on viewers with bland moral messages. It rather investigates on the teenager’s emotional standpoint. Minnie muses on sex as well as on love, often wondering whether any one loves her, at least secretly. 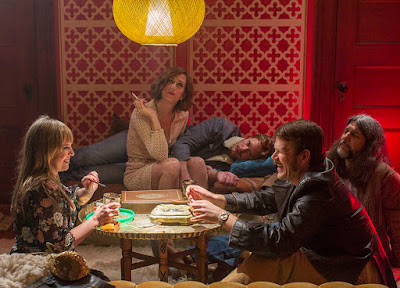 Heller’s adapted script (the film is based on Heller’s favorite graphic novel by Phoebe Gloeckner) avoids  two easy modes with which story could have been told: plaintive, melodramatic mode; and the finger-pointing mode. Monroe, despite his despicable acts, is left with a psychological ambiguity. Charlotte, despite all her irresponsible behavior, is textured with layers of esteem. The perils of sexual awakening that Minnie witnesses aren’t portrayed with a simple-minded moralization. Writer/director Heller observes and subtly comments on Minnie’s hedonistic lifestyle, without concocting situations that might pass an insipid message: ‘this is what you get for being slutty’. The lack of dramatic weight in the narrative plus the recurrent counterculture realism of the era may not satiate viewers expecting a goofy & sexy coming-of-age comedy. 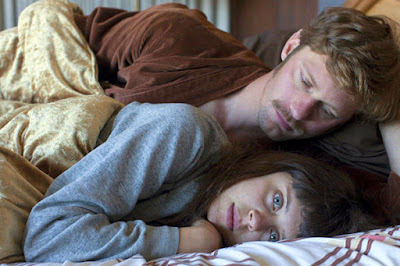 “Diary...” is, more or less, a subtle character study of a girl who is often thinking about how others see her and how she sees herself. Like many teenagers, she also thinks that having sex officially gives her a grown-up identity. Minnie, not being a desired nymphet, also plays a huge role in her seeking the physical and emotional transformation through sex. This line of thought is subtly expressed, when Minnie after losing her virginity asks Monroe to take a photo of herself. Minnie, who has lacked love in her formative years, sees sex as a means to embark on a transformative phase and so she places that Polaroid shot on her mirror, thinking ‘this is the occasion from which I would be loved or desired’. The narrative is also about how teenagers cope with their loneliness & alienation through art. In fact, Minnie finds her true-self through art (art kind of enlightens her journey). Eventually, this film is a story of sexual abuse, where the protagonist is neither portrayed as a sex object or as a victim. She is unapologetic about her affair and is also shown as capable of manipulation & seduction.

Director Marielle Heller, in her portrayal of Bay Area, conveys a historical authenticity to the era. The retro music, the sexual & narcotic mores of the era, the comics’ tradition of Aline Kominsky, Crumb and the tumultuous trial of Patty Hearst are all a credible simulation of the California 1970’s (and Minnie’s classroom teacher is seen discussing Holden Caulfield of ‘Catcher in the Rye’). Nevertheless, there is an honesty and urgency to the narrative, where the characters’ different ‘hyped needs’ could be easily related with the contemporary era. Although Heller’s direction is never judges the character decisions, it offers apt commentaries through visuals. The way she frames Monroe and Minnie (Powley seems diminutive next to Skarsgard) hints at the incongruous nature of their relationship. At one point, the unrestrained drunken party is abruptly cut and jumps forward to next morning, where Minnie calmly gazes through the window. It subtly showcases the emotional downfall and alienation of Minnie. 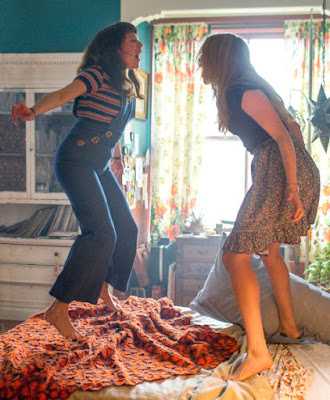 Despite all the directorial and writing elegance, the triumph of “Diary…” is based on couple of elements: the way sex & nudity is handled in the film; and Bel Powley’s powerful performance. The majority of nude scenes in the film are pictured in a non-sexual manner, like the scene when Minnie examines her natural body in the mirror. But still, the nudity and sexuality here might make many of us uncomfortable. May be it is because female sexuality is a little taboo subject in cinema or even the idea of teenage girls always thinking about sex is deemed as a incendiary subject to deal with on-screen (“Does anyone think about fucking as much as I do?” says Minnie). As Minnie has sex with her classmate, he is evidently rattled, when she is intent on taking an active role to ascertain her own sexual satisfaction. Powley, apart from diffusing physicality to the character, also takes on a balanced approach to bring out Minnie’s recklessness and exhilaration. She offers a kind of performance that depicts the true meaning of ‘seamless transition’.

“The Diary of a Teenage Girl” (102 minutes) provides a rare, teenage sexual awakening tale, addressed from a female perspective.  The film’s candid depiction of female sexual desires is surprisingly unburdened with moralistic overtones.

The Diary of a Teenage Girl -- IMDb
at January 06, 2016
Email ThisBlogThis!Share to TwitterShare to FacebookShare to Pinterest
Labels: American Indie Films, Coming of Age Movies