The Cremator [1969] – An Expressionistic Horror on an Agent of Genocide 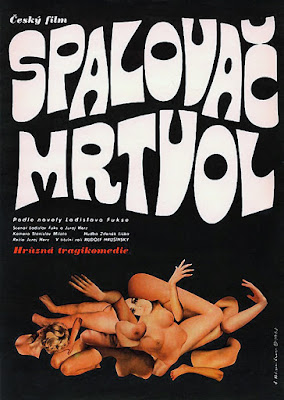 “Cremation is quiet humane and frees people from fear of death”

Prolific Czech film-maker Juraj Herz’s “The Cremator” (aka ‘Spalovac mrtvol’, 1969) is the kind of disorientating movie you need to watch (at least) two times to fully appreciate it. It would take quite some time (while watching it for the first time) to grasp the macabre characterization, setting and historical relevance. In the second viewing, after getting familiar with the narrative trajectory, we can marvel and further delve into its expressionistic cinematography and rapid cutting which immerses us on the distorted consciousness of the cremator protagonist Karl Kopfrkingl (Rudolf Hrusinsky). “The Cremator” amalgamates the elements of psychological horror with that of dark comedy and the resulting tone is both jarring and lyrical.


In the 1960’s, Czechoslovakian film-makers made some of the greatest humane and satirical works, which resulted to ‘Czech New Wave’. The key works of directors Milos Forman, Jiri Menzel, Jan Kadar, Jan Nemec and Ivan Passer were regarded as part of Czech New Wave, while the works of Juraj Herz is often said to be marginalized due to his puppet artist status. Juraj Herz studied in the puppetry department in Academy of Performing Arts in Prague (AMU) along with another renowned Czech film-maker Jan Svankmejer (Herz also worked as assistant director in Jan Kadar’s Oscar winning masterpiece “The Shop on Main Street”, 1965). “The Cremator” was Juraj Herz’s third feature and when he began shooting, his country was in its short-lived period of liberalization (between January 5th 1968 and August 21, 1968, known as ‘Prague Spring’). Herz’s artistic freedom was cut down before finishing the film as Soviet Union regained its hold over Czech film industry. Although the film was set in 1939, relating to the events after Hitler’s invasion of Czechoslovakia, director Herz ambiguously referred to the domination of totalitarian forces like the Soviet Union. This sharp allegorical nature of the film made Soviet censors to immediately ban the film and its complex, valuable social commentary was only discovered decades later. 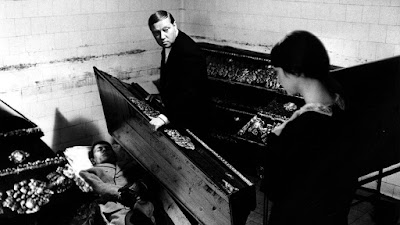 Based on Ladislav Fuks 1967 novel (Fuks and Herz collaborated on the script), “The Cremator’s” bizarre, creepy subjectivity offers us a trip of madness and murder. The extreme close-ups, spookily sedating oration, fish-eye lenses, uncomfortable inter-cuts, fluid cross-cutting, unbelievably quick transitions, and a haunting choral score keeps on increasing our feelings of terror as if we are trapped inside the mind of a self-seeking madman (and despite the pervading sense of doom there are some unforgettable moments of jet-black comedy). The central character Karl Koprfrikingl is so obsessed with his job that he can turn any casual conversation into the one citing importance of his job. He is a cremator, although he likes to describe himself as the one who alleviate humans from the evil of suffering and sets the soul free from body to be reincarnated. Karl calls the crematorium as ‘temple of death’ and while giving a tour of the place to a new co-worker Mr. Dvorak he explains every practical work with a blend of quirky observations: “these furnaces always reminds me of the ones in which our daily bread is baked”. 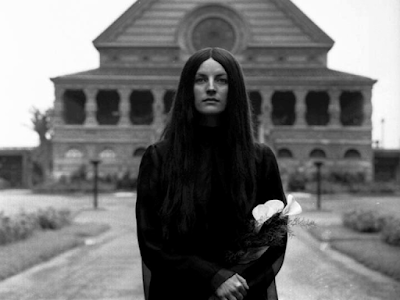 Karl also shows immense love for his wife Lakme (Vlasta Chramostava) and concern for his children future (teenagers Zina and Milli).  Karl’s finds simple pleasure in life by visiting a brothel, grotesque wax works and hearing classical music. He doesn’t smoke or drink, but pays a visit to doctor Bettelheim to check for any infection. Karl gradually becomes a prisoner of the morbid aspects of his profession and this is facilitated by the arrival of Nazi sympathizer friend Walter Reinke (Ilja Prachar). Under the friend’s influence, Karl goes to Dr. Bettleheim to trace his ‘pure’ Germanic roots in the blood. The doctor says “they are all the same like human ashes, be they French or Spanish, doctor or clerk”. But, Karl Kopfrkingl is encouraged to reject the words of ‘Jewish doctor’ and to act as informant for ‘The Party’. His descent into madness comes full circle, when he starts to believe on the ‘Party’s’ idea of salvation. Now all Karl wants to do liberate as many souls as possible, including the souls of his family members and friends.


The biggest challenge for director Herz in “The Cremator” is not adapting the bizarre events & characters to the screen, but designing a visual language that remains equivalent to the literary description of a deteriorating mind. The pre-title sequence of the film opens in front of leopard cage in the zoo, where Kopfrkingl met his wife Lakme, 17 years ago. The shots of Karl and his family are brilliantly juxtaposed with that of animals in the cage. There are a lot of extreme close-up shots of Karl’s creased forehead and prowling eyes, which are juxtaposed with the eyes of a lion, head of crocodile and tongue-flicking snake. These earlier shots hint at his animalistic tendencies and also suggest us about the upcoming unsettling atmosphere. In the same sequence, Karl claims his family as ‘decent & perfect’, while he and his family members stands in front of a convex mirror. The shot uses fish-eye lens (one of the many use of fish-eye lens in the film) which conveys both dysfunctions in his family and the deranging mental attitude of Karl. Some times there are extreme close-up shots of actual fish eyes, which the ‘Senses of Cinema’ article (written by Adam Schofield) describes as ‘conscious bit of meta-self-mockery in regards to the use of fish-eye lenses’. 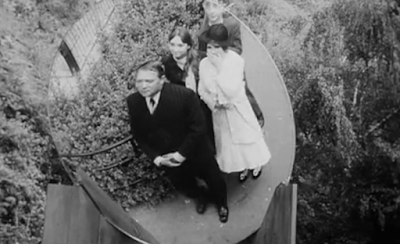 The title sequence is filled with fragmented body parts of female, which hints at his tendency to objectify women’s body and also about his unquenchable sexual desire. When Karl hangs a picture of beautiful art at his home, his mind conjures up images of nude women (jump-cuts are employed), suggesting his demented mental landscape. In the scene when Karl stands indecisively about where to hang the portrait of Nicaraguan President, flash-cuts are used where Karl is seen holding the portrait in various parts of room. The same technique is employed when Karl remains undecided about joining the party. Reinke’s words on party membership & the membership document are flash-cut with the images of naked woman, since those pictures are what tempts him the most than the ideology. Perhaps the greatest aspect of Herz’s visual language lies in the way he beautifully transitions from one setting to another. The dialogues have an unbroken flow and the expressions of Karl remain unchanged, but the character is invisibly transported over to a different setting. For example, Karl undresses alongside prostitute Dagmar (who eerily resembles his wife Lakme) in a brothel room and holds the ‘insect collection’ frame in his hand and goes on to hang it, but when he hangs it we understand that the scene has transitioned to his home. In another scene, Karl simultaneously witnesses a Jewish celebration and recounts it to Reinke. These fluid transitions showcase the increasing loss of reality and disorientation (the absence of continuity means is equated with the absence of rationality in Karl’s mind). 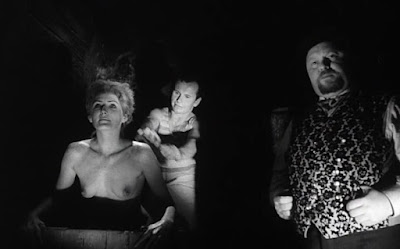 Director Herz and cinematographer Stanislov Milota combines the interior space of unnerving sets along with fast-cuts to create the horror feeling. The subjectivity that’s emphasized through the recurrent use of wide-lenses easily passes through the horror elements. Both the flash-cuts and subjectivity keeps us trapped inside Karl’s mind. In the scene when Karl takes his family to the carnival, the shots of smiling children at the playground, brings a sour expression to Karl’s face. But, inside the waxworks which exhibits brutal murders, Karl offers a devilish smile, indicating the desensitized nature of him. When the ‘bathhouse murder’ is vividly enacted by wax works, all Karl thinks about is their clean bathroom. In fact the horrific insensitivity of Karl in the waxworks exhibit paves the path for the murders he commits at the end (the metal bar and hanging rope foreshadows the ominous events waiting to happen). There are many other odd, eccentric framing decisions to demonstrate the unsettling nature between individual and surroundings. One particular, unforgettable odd framing comes toward the ending (after Karl committing those heinous acts in collaboration with Nazis). In this scene, Karl stands in front of a diabolic painting of Bosch and as he explains his grand idea to ‘free souls’, a nauseating montage of the hellish images in Boschian fresco is paraded for intimating the fully perverted sense of Karl’s (and Nazi’s or a totalitarian state’s) ideology. 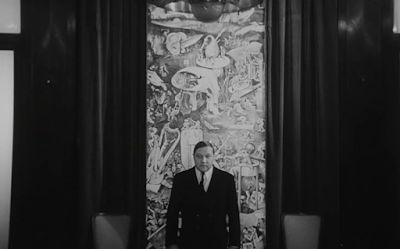 Despite employing such elaborate cinematic tricks, Director Herz’ s visual language doesn’t remain confounding or digressing in imparting the strong, incendiary statement about totalitarian state. Even though it is systematically odd, it speaks perfectly to indict the irrational, vile dogmas of both the ‘Third Reich’ and Soviet ‘Iron Curtain’. Karl interpreting ‘Tibetan Book of Dead’ to convince himself and others about cremation and using it further with a sinister edge could be related with the convoluted occult beliefs of the high ranking Nazis. In the waxworks, Karl witnesses various forms of disease and says ‘but modern science can protect us. When he is brainwashed by Nazi ideology, Karl comes to the conclusion that death is only way to prevent contamination (in the waxwork, a plagued young man is shown to commit suicide to stop the contagious disease). He also learns to consider the identity of ‘Jews’ as a plague and insists upon the cure of death. In this way, the Nazi’s final solution is related with that of Karl’s deranged mind. There are many touches of Hitler in Karl’s characterization (veteran of Great War, non-smoker, etc) The lines ‘We live in Europe in the 20th century, a civilized world’ and ‘I hear there’s martial law in the frontier regions’ are stressed out in the narrative to comment on the ironic fate of how Nazi domination is replaced with arrival of Soviet totalitarianism. The doctor’s words like “violence never pays; aggressors will be beaten in the end” may have caused unrest among the censor members of Soviet Union. The visuals and allegorical representations do become heavy-handed at times and the jarring tonal changes between psychological horror & dark comedy sticks out at times. But, such imperfections are upended by the beguiling central performance.  As soft-spoken Karl Kopfrkingl, Rudolf Hrusinsky offers a singular, most memorable, and dizzying trip into the mind of madman. Despite that cheery disposition, his eyes are able to get unnerving enough to get underneath our skin.

“The Cremator” (96 minutes) is a disturbing and ingeniously layered work of cinema that focuses on the horrific individual & sociopolitical changes in an indoctrinated country. It is one of the most unique, visually superior features made on the experiences of totalitarianism.