‘As Lithe and Fierce as a Tiger’: The Investigating Judge in “Z” 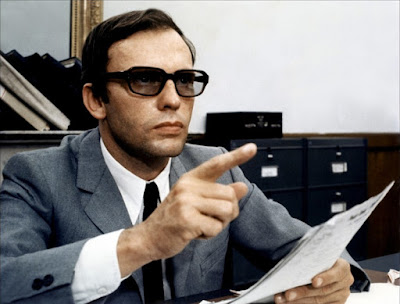 “The only thing necessary for the triumph of evil is for good men to do nothing”. The quote is attributed to British statesman, orator and political thinker Edmund Burke and it’s the one we often hear in movies, books, and public speeches. It is the kind of powerful words which forces us to shed our apathy. However, considering the intricate and unfathomable structure of evil in modern (so-called democratic) society, we are plagued with two questions regarding the quote: Is it possible to stand against evil forces? And if we did would it make any difference (in the long-run)? I mean, won’t the good forces that want to overthrow the evil, corrupt ones, themselves get corrupted by the luster of power?  May be that’s too much of pondering. To prove that we are a human being with fine perception, we definitely need to stand against the gathering forces of evil. Yes, it’s the right thing to do. Nevertheless, the toughest fight people wage in modern societies is to find an answer to this question: What is politically good and what’s politically evil?

We know the basic actions which divide good and evil deeds, but whenever you throw a word like ‘politics’ into the mixture, the good could be perverted and evil will be glamorized. Many lives are literally sacrificed, around the world for centuries, in a fight over this question. Actually, the answer is simple: speaking truth, nothing but truth. Even when a formidable power breathes down your neck, you should speak truth, be true to your sense of duty in order to seek the real justice (not the idea of justice which our bureaucracy hands over).  Of course, it is easier said than done. But, in greatest works of art we often see the engaging arc, where indomitable evil disintegrates with a person’s pursuit for truth. It might be the oldest narrative arc in cinema, but one which has the power to awaken or at least educate the masses.

Costa-Gavras incendiary political thriller “Z” (1969), based on Vassilis Vassilikos 1966 novel, has one of the most important characters in cinema – Jean-Louis Trintignant’s “The Investigating Judge” (or ‘Examining Magistrate’), a man who placed truth above ideology and greater powers. His actions and duties always faces the threat of being rendered futile by illustrious evil-doers, but his simple act of seeking and speaking truth gives abundance of hope in an otherwise unjust society. 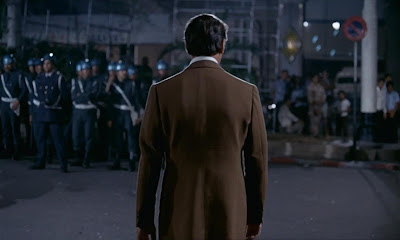 Director Costa-Gavras, the Greek expatriate, who studied film in France, and his Spanish writer Jorge Semprun state in their introductory title: “Any reference to real events and persons living or dead is not accidental. It is deliberate”. The words acknowledge how “Z” is about to chronicle the events before, during, and after the assassination of the Greek pacifist and social democrat Grigoris Lambrakis (on May 1963), in Thessaloniki. Although the film doesn’t mention any names, it is considered to be daring for its detailed (and little satirical) portrayal of a political murder. As critic Armond White says in his article for ‘Criterion’, “It took a European with one foot in a family political legacy and the other in cinematic craft to update the political thriller in terms both commercial and vital.”

Despite the political immediacy or historical specificity, “Z” stands as a timeless, powerful indictment of fascist powers. From this perspective, Roger Ebert’s words rings true: "“Z" is about...the assassination, six years ago, of a leader of the political opposition in Greece. It is also about all the rest of them. For Americans, it is about the My Lai massacre, the killing of Fred Hampton, the Bay of Pigs. It is no more about Greece than The Battle of Algiers was about Algeria. It is a film of our time. It is about how even moral victories are corrupted. It will make you weep and will make you angry. It will tear your guts out”.

Without wasting a single second, Gavras and Semprun, quickly introduces string of vital characters and builds up to the assassination sequence. The second part delves into the intricately detailed cover-up efforts made by government officials alongside the starting phase of investigation, led by Trintingnant’s ‘Investigating Judge’. The third act is more riveting than the first two as the bespectacled ‘judge’ with a stoic facade pursues truth to break open the conspiracy.

Trintignant character was obviously inspired from Christos Sartzetakis, the man who prosecuted the real ‘Lambrakis’ assassins. Although Sartzetakis was an anti-communist Greek nationalist, he didn’t allowed his ideology to get in the way of truth. For which he was imprisoned, tortured after the coup d’etat by Greek military junta in April, 1967. After the restoration of democracy, Sartzetakis eventually went on to become the nation’s President (in 1985) and was widely respected for his integrity. Earlier in the film, the pacifist organization’s members meet Public Prosecutor to convey the information they received about alleged assassination attempt on their leader (Yves Montand). That’s when we first see the ‘magistrate’ as he is introduced by Public prosecutor to the pacifist organization members. The magistrate has a stern face whose big, dark glass masks his emotions.

Later, when the investigation begins and gradually becomes the backbone of the narrative, the ‘Investigating Judge’ aka ‘Le juge d’instruction’ finds himself surrounded by men capable of manipulating the facts for their own political ends. Jacques Perrin’s journalist (a go-getter) plays a vital role, as he is the one able to bring out the identities of both accomplices and witnesses (he is not just doing it for a sensational story and he's also apolitical like the magistrate). The real-life Sartzetakis must have had the sole goal of pursuing truth without compromising his integrity and would have never thought of himself like a crusader. But, the manner with which Gavras diffuses a sense of emotional urgency into the tale slowly transforms ‘the investigating judge’ from being an honest man to a crusading hero (without ever taking sides).

Unlike agitated protagonists burdened to bring out the truth, Trintignant’s character seems unfazed. He is a very real character, who searches for truth from the heap of alleged facts. We are more engaged in his steady pursuit for truth by the maintenance of an emotional distance. There’s an inherent melodramatic nature to the story, which is countered by the ‘investigation judge’s’ unaffected, unyielding methods. In one brilliant scene, we suddenly hear him stop addressing the alleged assassination as ‘incident’ to call it a ‘murder’. That small change in words elegantly conveys the character’s conviction.


During the investigation from the low gang members Yago & Vago to high-ranking General they use the phrase ‘as lithe and fierce, like a tiger’ while explaining about an incident after the ‘accident’ or ‘alleged assassination’. It is a wonder how in reality these conspirators (who hatched out a perfect plan) would go and repeat the same lying excuse in their testimonies. They all might have been coached to give some specific answers, but not to use the same phrase. But, Gavras includes such light humor (along with few other visual laughs) to provide a counterweight to the documentary-like approach. And, when the phrase – lithe and fierce, like a tiger -- is repeatedly told, it becomes fitting words to explain the unwavering methods of our ‘investigation judge’.  Director Gavras doesn’t include any ‘buffer’ scenes to soften the impact viewers feel after disclosure of information. For example, the nation’s prosecutor (a old man wearing dark glasses) arrives at the city and expresses his dread over the direction the investigation has gone into. He offers ways to blunt the outcome of investigation, by placing the blame wholly on two fanatic men and further tempts the ‘investigating judge’ with better offers. 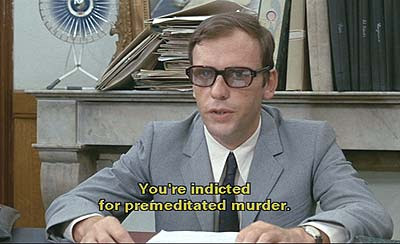 When the aforementioned sequence cuts, we don’t see Trintignant’s characters contemplating or discussing with his subordinate about the decision he should make. Gavras abruptly cuts to the short of a military general, furiously entering into the interrogation room. The investigating judge with the same indifferent expression asks “Name and Profession” to finally read the charge, ‘you’re indicted for premeditated murder’. It is a wonderful sequence (one of my most favorite one in cinema), which conveys the unwavering nature of the ‘judge’ without an inclusion of a highly dramatic buffer scene. Gavras rather includes little drama to satirize the behavior of government officials after the indictment (all of them trying to escape through a short pathway find the door closed and walk through the slew of pestering journalists). The humiliation faced by corrupted officials when the investigating judge simply asks their ‘name and profession’ comes off more revolutionary and entertaining than a sequence, which involves a protagonist bashing group of bad men. And, more than any other hero material, prone to violent tactics, Trintignant’s judge perfectly embeds the idea of citizen duties and integrity – the notion I feel more important in an increasingly apathetic society.

Jean-Louis Trintignant’s minimalist performance earned him the Best Actor award at 1969 Cannes Film Festival. Impassive gaze has always been the great strength for the actor. In “Z”, he holds our attention with a simple, dispassionate look through the geeky glass. The end credits in “Z” rather than being awashed by rainbow-colored optimism cynically showcases the repulsive clampdown on everything from ‘mini-skirts’ to the word ‘Z’ [the Greek protest slogan ‘zi’ means ‘he lives’ – a reference to Lambrakis].

The ending echoes the persistent efforts of political conspirators & war-mongers to upend democracy, but as in reality (in relation to what happened to Greek military junta) truth and truthful men will eventually prevail (although the sacrifices to attain that would be enormous). Men like Sartzetakis and his appeasing cinematic counterpart ‘Investigating Judge’ plus those who stood by truth in the investigation are the ones, who give us abundance of courage and hope, while swimming through the currents of inhumanity. They pushes us to witness the meaning of George Orwell words: “During times of universal deceit, telling the truth becomes a revolutionary act”. 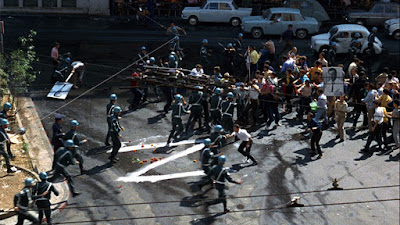