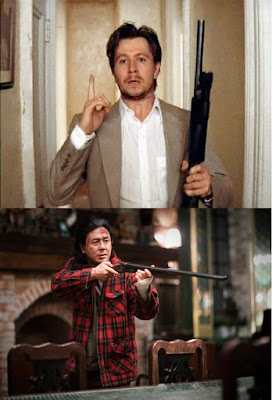 I like actors who can effortless swing from one extreme mood to the other. From great actors like Robert De Niro, Al Pacino to the present-day promising actors Jake Gyllenhaal and Tom Hardy, these actors’ demeanor could easily slip into fury and could also be a wellspring for compassionate emotions. In this elegant transformative style of acting, I think there are two significant actors whom I like the most, compared to other actors: Gary Oldman and Choi Min-sik.  They could play likeable ‘bad ass’ characters, totally despicable villains, enigmatic and empathetic men. Unlike Al Pacino or De Niro, Oldman & Min Sik hasn’t always played as protagonists, but their menacing, all-encompassing screen presence some times towers over the lead performances. That calm, slow walk of Oldman before commencing a carnage in “Leon: The Professional” and the ‘casual brutality’ of Min-sik in “I Saw the Devil” are something that’s totally unforgettable, spine-tingling stuff. The broad range of emotions these men possess also helped them to do tougher job of portraying great artists: Oldman as Beethoven in “Immortal Beloved” and Min-sik as the emotionally restless, self-taught painter Jang Seung-up in “Painted Fire”. Gary Oldman’s three and a half decade career and Choi Min-sik’s two and a half decade career also encompasses their diverse works in theater and television

[Min-sik after Park Chan-wook’s “Sympathy for Lady Vengeance” went on went on a brief hiatus from the industry, largely due to his opposition to the film screening quota slash by the government at the behest of the United States government].

Memorable line: “I like these calm little moments before the storm. It reminds me of Beethoven.”


Plays the legendary music composer Ludwig Van Beethoven, bringing out the near-madness and passion that drove the icon to give triumphant works.

Memorable line: “It is the power of music to carry one directly into the mental state of the composer.” 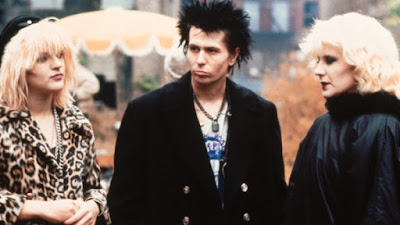 
Plays Sid Vicious of British punk rock band ‘Sex Pistols’. In this sad biographical story, Oldman perfectly captures of the agony of a young man who wants to be loved and the characters’ anxiety that pushes towards self-destruction.


Portrays real-life British playwright Joe Orton, which tracks down the guy’s fateful relationship with reticent Kenneth Halliwell. Although, Oldman is widely known for his over-the-top antagonist roles in “The Fifth Element”, “Air Force One”, he could astonish us with subtle, internal performances like the one he plays in this film. The slow, natural evolution of Joe Orton’s emotions (the charm as well as the indifference) is brilliantly performed.


As much as I liked Oldman’s scene-stealing performance as Shelly Runyon in “The Contender”, I wasn’t convinced by that film’s conclusion, which totally undermined Oldman’s character. I also liked the way Oldman portrayed the coveted role of Sirius Black in “Harry Potter”. But, I am inclined to mention his spellbinding portrayal of one of my favorite literary character – George Smiley, created by the great novelist John le Carre.  In this complex exploration of cold-war politics and human condition, Oldman’s calm presumptuous and disdainful behavior thoroughly fascinated me.


Plays the disturbed Dae-su Oh, seeking vengeance and truth. Min-sik’s astounding performance takes us into the heart of a embittered, vengeful soul.

Memorable line: “Laugh and the world laughs with you. Weep and you weep alone.”


Plays the celebrated 19th century painter Jang Seung-up. In this role, Choi impeccably brings out the artists’ central paradox: so ambitious but hates the success & fame that comes from it; applies his soul to create such images of infinite beauty, yet submits to wild cravings.

Memorable line: “People find in my pictures what they expect. I must get away from that. If I don’t, I’ll always be their prisoner” 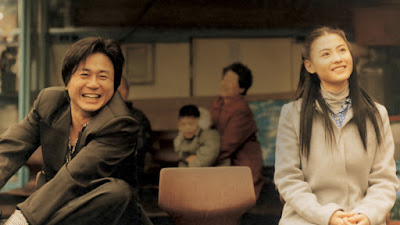 I Saw the Devil (2010)
Plays the hateful psychopath Jang Jyung-chul, who’s hunted down by top secret agent. The sudden shift to calm to maniacal behavior is once again effortless conveyed by Choi. This performance was as viscerally disturbing as Ken Ogata’s serial-killer performance in “Vengeance Is Mine” (1979).


Plays a sympathetic, small-time gangster Kang-jae. This is the most raw and coolest performance of Choi Min-sik. He wonderfully etches out the moral disposition, which stops his character from being the bad guy. Like Oldman’s internal, subtle performances in “Tinker…” & “Prick Up Your Eyes”, “Failan” stands as a one of the testament to Choi’s versatile acting skills.


Plays a corrupt civil officer Choi Ik-hyun, who weaves a powerful crime partnership in the 1980’s South Korea. This may not be the most disturbing or immensely likeable performance of Choi Min-sik, compared to his presence in “Sympathy for Lady Vengeance” and “Crying Fist”, but I felt he gave his most depthful performances in this film. The jarring tonal shifts of this film don’t make it a great one, but Choi leaves off his typical towering demeanor to convincingly transform into a clumsy, big-mouthed guy.

at August 06, 2016
Email ThisBlogThis!Share to TwitterShare to FacebookShare to Pinterest
Labels: Movie Lists