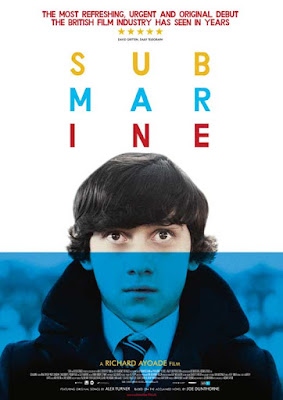 Joe Dunthorne’s first novel and Richard Ayoade’s adapation of the novel,  explores variety of relevant adolescent themes to be bestowed with the perfect title – “Submarine”. Similar to that man-made vessel’s exploration of physical, biological and chemical conditions on the hard-to-fathom ocean bed, the film (as well as the novel) takes us below the blank expressions of a teenager to comprehend the inner emotional turmoil. A long movie list could be conjured on the subject of on-screen brainy, emotionally-stunted, misunderstood teen protagonists. “Submarine’s” Oliver Tate (Craig Roberts) has these well-known (or well-worn) characteristics. He is highly self-conscious, makes wry comments, and clumsy when it comes to social behavior. The widening eyes of Oliver seem to reflect the slowly diffusing emotional pains of being an adolescent. In the narrative course, he will come to terms with his sexuality, identity, romantic relationship, and the looming possibility of separating from parents. His comfort zones are incinerated and he is thrown out of the luxurious cocoon into the whole wide world. The effervescent first-person narrative and the inherent quirkiness make “Submarine” perfectly entertaining. Its quirky tone doesn’t flatten the coming-of-age themes, but rather makes us charge deep into the emotional depths, reminding us our own little emotional damages during that phase of life.

Of all the coming-of-age tale protagonists, Oliver Tate is a very relatable character (although Oliver himself is a combination of different literary and cinematic characters). Grandiose fantasies, pre-occupation about increasing social status (‘street cred’) and the miserable present, feelings of insignificance, isolation, blurting about some random fact to come off as intelligent boy, strange hobbies, awkwardly observing your schoolmates from the periphery, distressing sense of finitude and the quirky fascination with death. The film is set in Swansea, South Wales, in the mid 1980’s, the era when John Hughes made movies with tenacious teenagers. In the opening scene, we see Oliver, huddling near his room’s window as a bluish light of early morning flows through. The books shelf and the poignant reminders of childhood (photos) indicates the robust intelligent and emotional side, although his perception of current reality (learned through the quirky first-person narration) shows the usual disillusionment we all face during puberty. Oliver has decided not be an active participant in his own life. He stays on the outer boundaries to observe his parents, classmates and cooks up fantasies when it comes to personal interaction. 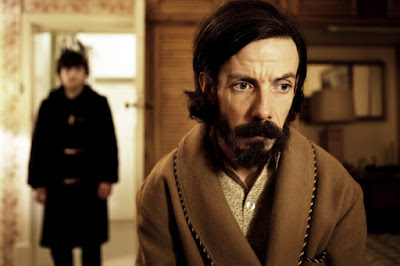 Oliver’s prudish mother Jill (Sally Hawkins) seems to be contemplating worn-down relationship with her husband Lloyd (Noah Taylor), a marine biologist, who has become stagnant and running into the deeper rungs of depression. They both veer in-between satisfaction and bewilderment, just like Oliver himself. The arrival of mother’s old flame Graham (Paddy Considine) – as new neighbor – makes Oliver wonder about the instability of his home life. Graham is a mystic self-help guru, who seems fascinating, at least on the surface. At school, Oliver has no friends, but only the stylized vision of how the townspeople would mourn if he is dead (especially the female schoolmates cry a lot). In a bemused state, he participates in a round of bullying an overweight girl Zoe Preece and pushes her into a puddle. This particular incident haunts Oliver and his ensuing sympathy for the girl is an essential element for his emotional progress. Oliver’s primary goal in school is to increase the street cred by forming a connection with the moderately popular, ‘bad’ girl Jordana (Yasmin Paige). Jordana is cloaked in a red coat, signifying Oliver’s perception of seeing her as an object to further his social status. At later points, the color ‘red’ takes different meaning and Jordana grows bigger than being an object of desire. The other important task at hand is to obliterate any possibility for the rekindling of a relationship between his mom and Graham. 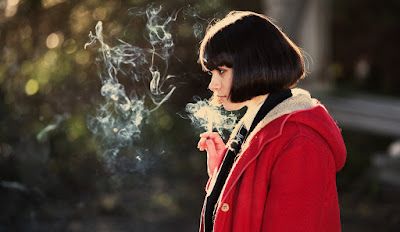 The adolescent phase is pretty much like traveling in a submarine, gazing through a small window at the dark, swirling creatures of outside world. The newly triggered sexual desires and instinct for aggression unsettles and disrupts our version of reality. We become an enigma to our parents and our parents’ relationship would seem like a paradox. We delve into the deepest depths to not get thrown out of our comfort zone, while at the same time we make fantasies out of the possibly emerging, new experiences. We struggle deeply to keep our turbulent emotions submerged. We’d like to wade deep into the water, but also afraid of getting fully drenched. We want everyone in our limited world to understand us, but at the same time we remain unable to relate to other persons. We jail ourselves inside a bubble, while hatching grand plans for romantic relationship or at least human connection. We desire a partner in order to only reach ourselves or to figure out who we are rather than having a genuine interest on the other person (probably this we do as adults too!). And, finally we are made to come to terms with the flaws of our own parents, which is initially painful to tolerate.  Oliver Tate’s adolescent trajectory in “Submarine” takes this usual path, but what makes this journey into adolescence fascinating hinges upon two vital aspects: Ayoade’s impeccably crafted visual language; and Craig Roberts’ exemplary, easily relatable introverted behavior.


Director Ayoade balances between the use of colors blue (associated with stability, trust, truth etc – in American culture blue is known as color of depression) and red (associated with love, loss, passion, etc) to signify the conflicting emotions faced by Oliver. Water is used as an important visual metaphor (a symbol for purity, life, cleansing – what does it signify here?). From fish tanks to dirty puddles to vast sea, water recurrently occupies the frames. As Oliver and Jordana gazes into the sea, they seem to be contemplating the ongoing flow of time (which brings unbridled agonies and joys). Water seems to be emphasizing their important transcendent phase in life. Cinematographer Erik Wilson and Ayoade make the action flow smoothly with lack of fast cuts. Even in the hand-held shots, a sense of atmosphere reflects in the frame rather than bluntly following the subjects (some extreme close-ups might be deemed unnecessary). The most striking aspects of the imagery are the dilapidated industrial vistas and the coastal surroundings. There’s also something pleasing in the way Ayoade has opted to shoot outdoor sequences in natural light. Some of the timeless qualities of the visuals are heightened by original songs (written by Alex Turner and composed by Andrew Hewitt). 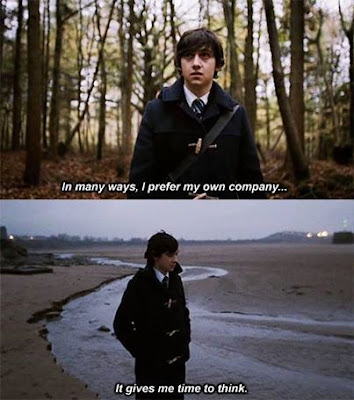 The visual style and the characters would immediately remind us of Wes Anderson and Hal Ashby’s death-obsessed teenager in “Harold and Maude” (1971). Unlike Anderson’s indulgence with magical realism, Ayoade’s work uses the surface quirkiness to explore the ‘false-self’ and pseudo-mature proclamations. Dunthorne’s novel and Ayoade’s adapted script has plenty of timeless, quotable dialogues [“Dear Jordana. Thank you for letting me explore your perfect body. I could drink your blood, you are the only person that I would allow to be shrunken down to a microscopic size and swim inside me in a tiny submersible machine” – one of my favorite lines]. The primary challenge in adapting a coming-of-age novel and using a first person voice-over narrative is to rise above the well-mined tropes, and to not repeat the emotions again and again. Ayoade acknowledges the inescapable cliched pits that accompany such a story. What he does best is to make the primary characters real and relatable so that we don’t care much about the small, familiar paths the tale takes. The film boasts nuanced performances from all the members of the cast. From Craig Roberts to Sally Hawkins, every character seems outlandish on the outset, but they elegantly convey their personalities. Roberts’ Oliver Tate and Paige’ Jordana are diffused with amazing intricacy that they could become iconic characters in the future (especially Jordana will be an iconic ‘first-love’ character in cinema – Paige’s stoic face is unforgettable).

“Submarine” (97 minutes) is about the forceful fantasies we indulged ourselves as a teenager to transcend the humdrum existence. It subtly explores the adolescent phase in which our ideas about world doesn’t match with the reality we face. It shows that self-realization we attained when looking at this world through a fresh set of adult eyes.