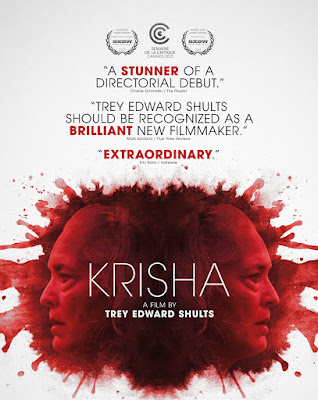 Trey Edward Shults’ debut indie feature “Krisha” (2015) opens with the face of a woman in her sixties with a grey curled hair and a lined face. She, the title character, is staring at viewers with a raw expression which is full of fear, remorse and desperation. Then, we see her shuffling up to a big, suburban house, reminding herself, ‘Calm down. Just chill’. The camera creeps up behind Krisha, accentuating the tension she must feel while walking towards the sister’s house. She is the basket case or black sheep of the family. The opening shot plus the free-floating point-of-view sets up a micro-budgeted horror movie tone. It’s as if the central character is walking into a congregation of demons, disaster looming around the corner. Or, may be she is the demon waiting to wreak havoc upon the Thanksgiving weekend family gathering. “Krisha” is not the kind of horror movie we expect. The ghosts here are metaphorical. There’s an impeccably crafted atmosphere of dread, but it is the kind of dread we feel while getting acquainted with the ‘happy’ family members after a long gap. There would be warmth in their hug, but an underlying judgmental sting would gradually occupy the ensuing interactions. You can imagine how such a gathering would incite conflicting emotions on the family’s ‘black sheep’ (or as one character says in the film ‘the abandoneer, heart-break incarnate’).

“Krisha” tracks down the downward spiral of an old woman (a recovering alcoholic addict) over a 24 hour visit to her sister’s house. It is the kind of theme that’s repeatedly staged by indie films to be totally transformed into a cliche. The addicted lead character would despicably relapse, spewing hate upon the people who really cared for them. Part of the relapse would be kindled by the judgmental gaze of the family’s adults. The narrative beats could be predicted in such tales, long before it comes into our view. The message in the end would either be less astute or too stilted to give an authentic, riveting experience. Trey’s indie debut doesn’t circumvent the alleged cliches. In fact, its bare-bones plot-line is filled with a highly predictable structure, but at the same time Trey has also diffused enough sumptuous meat around the bare-bones through resolute performances and unique technical presentation. The sound design, camerawork, editing, the performance of Krisha Fairchild, and the story behind how it got made, makes “Krisha” an impressive character study of a woman with volcanic emotions. 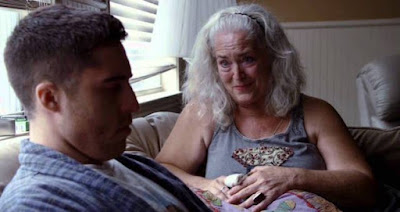 Writer/director/editor Trey thanks his family and friends in the end credits, not just for the mental support they have provided him. Trey’s family had literally supported him by playing themselves on-screen. The director played the role of estranged son, while casting his aunt Krisha Fairchild (who had an unremarkable acting career) as the absent mother and his own mother became the tale’s surrogate mother. Director’s Trey dementia-afflicted 92 year old grandmother’s presence is the exuberant factor of the narrative. The very old woman didn’t even know she was in a movie and the scene, where she remembers her own mother and family lineage brings about an unstaged subtext to the film. Professional actors are also present alongside the real family members. The best among those is Bill Wise, who plays the ‘uncle’ character – the one who initiates the bittersweet conversation with Krisha on the porch. While the mother and son conflict is cooked up for the narrative, there are many other personal elements that made into the story. For example, director Trey as in the movie character ‘Trey’ has been asked by parents to join business school and get a good job (Trey Shults quit business school to work as intern in Terrence Malick’s films, including the upcoming documentary “Voyage of Time”). Shot over 9 days in his mother’s house in Texas, Trey Shults’ movie is really an inspiration for young film-makers with a limited budget, but a moving personal story to tell. “Krisha” went on to win audience award and Grand Jury prize at SXSW 2015 plus the ‘John Cassavettes Award’ at Indie Spirits (was also selected for the Cannes Film Festival’s Critics’ Week). 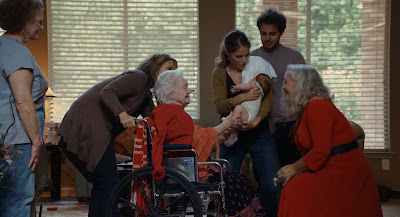 Krisha’s attempt to control her neuroses, the wavering stability, as she searches through cabinets for stashed away bottles, and the gradually gathering of personal traumas are resonated through hard-to-shake-off graphic depictions. If the camera movements has the influence of Malick’s works, these heart-breaking episodes of relapse reminds us of Darren Aronofsky’s earlier works. Director Trey perfectly depicts the desperation one experiences, while fearing about their fall amongst family members. The mounting desperation of Krisha seems to be heightened by the cacophonous, non-stop chatter of the youngsters, playing sports or teasing each other. This atmosphere of chaos and dread isn’t visualized through shaky camera movements. Trey and cinematographer Drew Daniels mostly use Steadicam shots and elegant slow zooms to capture small bitter glances and an unnerving happy facade. The camera becomes the perfect stand-in for Krisha’s eyes, which looks everywhere at once trying to process things through all the raucousness. The baleful buzzing (and discordant notes) in the soundtrack keeps us on the edge to look out for descent into devastation. Eventually, more than Trey Shults impressive artistry, the formidable element of the film is Krisha Fairchild’s performance. Her shocked as well as silent expressions perfectly showcase the tiny emotional fractures, waiting to upend Krisha’s constancy. The ‘less-is-more’ acting approach of Fairchild spikes our empathy levels.

“Krisha” (83 minutes) is a small, indie movie that takes the well-worn shell of a dysfunctional family drama and transcends it effectively through a distinct film form and vivacious writing (which is derived from deeply personal experiences). It’s the kind of upsetting personal cinema, which definitely won’t give a palatable movie experience for many viewers.