Evolution [2015] – A Bizarre Take on the Limitations of Childhood 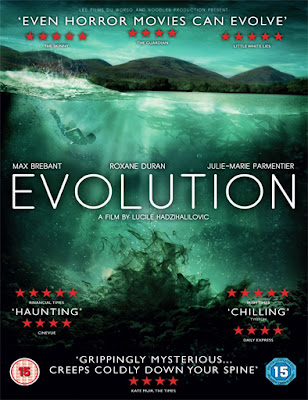 French film-maker Lucile Hadzihalilovic’s ambiguous horror “Evolution” (2015) is beautiful as well as frustrating movie. It is the kind of movie that makes you scratch your head during the end credits, leaving you to reflect on the bizarre and ethereal visuals. “Evolution” is a nightmarish fairy tale about childhood, puberty, alienation, abuse of gender roles, and sexual reproduction. That’s pretty much evident, but it’s ‘show, don’t tell’ approach by the film-maker demands some patience, contemplative mind set, and a strong stomach to take in the unsettling images. The body horror element and isolated atmosphere reminds us of David Cronenberg works and H.P. Lovecraft’s short story ‘Dagon’.

The movie opens in the ocean bed, the camera looking towards the sun as its majestic light shines through the prism of clear water. We observe the aquatic plants, which elegantly dances with the current. An unsettling silence hovers around as we perceive these beautiful images. It made me remember the opening scene of Herzog’s “The Enigma of Kaspar Hauser” asking “But did you not hear the dreadful screaming all around that people usually call silence?” The spiritual calmness of the images insinuates that deeply distressing element is concealed. A boy named Nicolas (Max Brebant) swims into the ethereal frame and as expected the calmness is disrupted when he sees the corpse of a child in the ocean bed with a starfish resting on the corpse’s stomach. The shocked little boy runs towards his volcanic island, whose streets are paved with black sand. When Nicolas tells what he saw under the ocean bed, his mother with parched eyebrows (Julie-Marie Parmentier) replies “the sea makes you think all kind of things”. 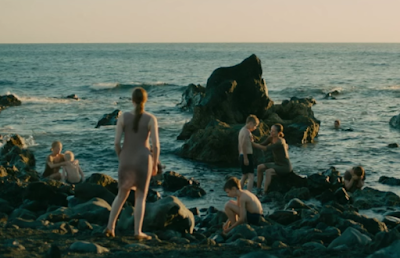 Wearing red trousers and red t-shirt, Nicolas seems to be a curious boy. He lives in a barely furnished house and his pastime is drawing in the little notebook. To our surprise, we find out that the island’s meager population is consists of enigmatic women and their little sons. The boys eat boiled seaweed and ink-like substance to drink before sleep. A bullying boy in the island dares Nicolas to come out and bury a big lifeless mollusc. As Nicolas touches the lifeless form, he contemplates death and has more questions about growing up. Soon, the boys are moved to a ghoulish hospital, situated on the edge of the island. A young nurse Stella (Roxane Duran) has a kind look on her face, while the rest of the hospital staffs, like the boys’ mothers, possess unnerving gaze. They huddle around watching c-section procedure, from an old recorded tape. Nicolas is strapped into a gurney as the doctors perform some kind of operation in the stomach. Soon, all the boys of island are staying in the hospital bed with little scar near the belly button. The woman routinely gathers around the shores at night, walking from their house holding a lantern. Nicolas after his return from hospital decides to discover the secret of what the women are doing in the night. The boy comes across a nightmarish truth which partly seems like a hallucination. The boys are gradually pulled into a deeper abyss, full of distressing intentions. 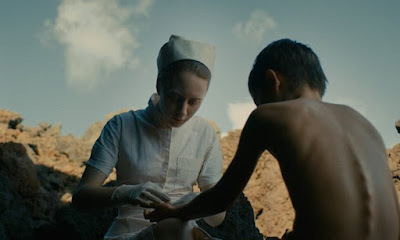 Director Lucile Hadzihalilovic’s debut feature “Innocence” (2004) was set in a boarding school for little girls, who were restricted from leaving. While the gender roles are revised in her second feature film “Evolution”, the young ones growing in restricted environment forms to be the central, intriguing idea. We are all brought up in what’s called a ‘normal’ environment. But, doesn’t this normalcy sort of enshroud us inside a cocoon, allegedly protecting us from outside, malevolent forces? The events unfurling in “Evolution” looks bizarre, cruel and surrealistic, but it basically peels the layers of what’s thought of normal behavior in the isolate community of humanoids. Like us, the children in the film have an illusion of freedom as they freely roam around, poking at things. But, there are definite limits to this roaming. Nicolas is curious enough to perceive this imprisoned status and look beyond the illusory freedom. Similar to the manner, he swims deep and away into the ocean, he seeks a total freedom, whose ultimate price is his innocence. This narrative arc (desire for freedom, threat to innocence, etc) is pretty much what we come across in all coming-of-age films, but only here it all conveyed through a nightmarish, metaphorical meaning. The swapping of gender roles was also interesting. While we usually see (in movies) girls being groomed from a young age to find a place in the man’s world, “Evolution” offers a scarier play with those gender roles. Here the boys remain passive and the women are the threat. They are the evil force intent to create life without sex and love. The images that repeatedly lingers on the boys’ stitched-up stomach is unnerving to watch, but this switching of roles questions the role of boys and girls in a society.

Apart from the movie’s disturbing images (the extreme close-up of a snail crawling over a belly button was unforgettable), there’s lot of mesmerizing visual compositions by cinematographer Manuel Dacosse. Director Hadzihalilovic’s clear sense of direction creates mysterious aesthetics, bathed in blues and greens (these colors in the low-lit hospital rooms gives us a feeling of being under the water). As the narrative is light on explanation, the visuals consistently maintain the sense of dread and strangeness. Of the various visual motifs, the ‘starfish’ was the most intriguing. The starfish’s asexual reproduction and the ability to regenerate limbs are evoked to insinuate how the boys through surgeries are being mutated to attain the sea creature’s trait. The bacchanalia of nude women, lying near the shores, moaning loudly facing towards the skies, when see from above, takes the form of a starfish. The color ‘red’ from Nicolas t-shirts and trousers (shown in the first half) seems to indicates the passion and primal life forces, seething inside his soul. Nicolas’ bright drawings of Ferris wheel, cars and Christmas tree (and who could be that curly haired woman?) seems to indicate his ‘normal’ past (if there was one). But, still despite the profound interpretations and unsettling plus beautiful nature of the images, something stops “Evolution” from being a wholly satisfying horror experience. Heavy comparisons are being made between this movie and Jonathan Glazier’s astounding sci-fi “Under the Skin”. But, I felt an emotional connection with an alien, trying to be human. The alienation of the alien creature, trying to fit into the normal human society sort of reflects our own alienated feeling in submitting to the conventions of normal thinking and lifestyle.  In “Evolution”, the neutral and passive emotions of the boys (Max’s minimalist performance has no faults) plus the monstrous behavior of women (except Stella) doesn’t offer an emotionally relatable perspective. Yes, in the second viewing the deeper themes and intriguing ideas of the film-maker becomes clear, although I was not able to feel a emotional fluidity, strongly present in “Under the Skin”.

“Evolution” (81 minutes) is an unsettling mood piece that uncovers the hideous layers lying beneath a sensual atmospheric surface. It demands our whole attention to observe the visual craft on display, which also provides good distraction to the narrative shortcomings.