“What part of bird doesn’t fly?

Writer-director Rodrigo Garcia’s thought-provoking drama “Last Days in the Desert” (2015) chronicles the journey of a man, wandering the desert for 40 days, trying to find answers, and surrounded by doubts and temptations. In his journey, a young boy, on the cusp of adulthood asks him the aforementioned riddle. The man wants to take off like the bird, soar high above with abundance of faith, but then there’s a ‘shadow’ that follows him, constantly reminding him of uncertainty, entrapment and the futility to trust in humanity. The vitality of this man’s journey becomes evident, when we hear his name ‘Yeshua’ – the Hebrew name for Jesus – and he is tormented by ‘Lucifer’ himself. Strangely, the devil or Satan also takes the form of Yeshua, wondering whether it can weave its seductive power on the self-doubting, desert-wandering holy-man. In the biblical passages, there’s a reference to Christ’s 40 days of prayer, during which he is confronted by Satan with three temptations. Rodrigo Garcia takes this smaller material to imagine Jesus as a man with his own existential crisis rather than present him from a symbolic or mythical perspective.


Of course, this isn’t the first attempt at such an approach. Greek writer Nikos Kazantzakis’ monumental interpretation of the Gospels in “The Last Temptation of Christ” (and Martin Scorsese’s wonderful movie version) depicted Jesus’ profoundly human side, including the torments and anger. The highlighting of the savior’s human side, his pain and suffering made his sacrifice much bigger. Then, there was Pier Paolo Pasolini’s glorious, revisionist take in “The Gospel According to St. Mathew” (1964). While Garcia’s film neither has the zeal of those movies to connect viewers on an emotional level nor profound enough to dive deep into the philosophical debates, it does provide some space to ruminate upon the relatable, inner struggles which would continue to plague human relationships and their faith. The other vital reason to watch this film is to witness the lingering, beautiful shorts of stark desert-scape from the most sought-out cinematographer Emmanuel Lubezki. 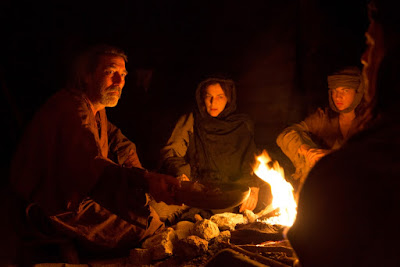 Writer/director Rodrigo Garcia’s films mostly focus on the internal conflict – between self and ego. His central characters have been predominantly women – “Things You Can Tell by Just Looking at Her”, “Nine Lives”, “Mother and Child”, “Albert Nobbs” – and the narrative are set in contemporary era. He has taken a different path with “Last Days in the Desert”, designing it as the story of sons, trying their best to carve a destiny for themselves under the oppressive fathers. He has also tried a restrained approach to keep the viewers at mild distance and exclude his usual dose of melodrama. I won’t say that Garcia’s distinct approach has paid off perfectly, but for the most part the narrative latches onto a appropriate mood to instill contemplation. The film starts at the last days of Yeshua’s (Ewan McGregor) desert journey, where he encounters a family of three and gradually gets embroiled in their conflicts. The isolated family’s mother (Ayelet Zurer) is dying, the son (Tye Sheridan) wants to leave the desert to make his own destiny in Jerusalem, and the proud father (Ciaran Hinds) wants his son to commit himself to the desert life and uphold his honor. The father doesn’t understand his son’s dreams and in his desperation he slowly resents the son. Yeshua spends time with each family member and begins to empathize with their plight. The father-son issue makes him draw parallels with his own conflict. The smirking Lucifer who accompanies Yeshua in his journey challenges him to solve all the familial conflict to their individual satisfaction. 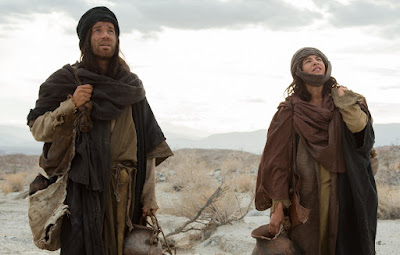 Similar to the other great interpretative works on God’s son, Garcia’s script captures the pensive nature and dreadful moments of Jesus’ human side. With an absence of a wise narrator from above guiding him, Yeshua is shown to be a man with great knowledge and wisdom, but gets trapped when using those to eradicate life struggles. He understands the people’s struggles, but the path to bring peace to their life seems so twisted. The film’s heavier themes like mortality, sacrifice, and redemption weren’t dealt with a profundity I expected, but the universal human dilemmas addressed in the narrative brought up enough emotional resonance. The inevitable path we take to hurt the ones we love the most, the inner conflicts during the agonizing period when the child becomes a grown-up, the little gatherings of resentment in our heart which gradually transforms the relationship dynamics, and the notions of communication are some of the relatable aspects in the narrative for me. Of course, the contemplation on these familiar conflicts could happen only after penetrating through the hardened, dry narrative surface. The emotional distance and lingering on the stark landscape that wants to provide spiritual nourishment for the viewers becomes too aloof at times to derail the viewer’s interest. There’s couple of truly good sequences (the one where the devil teases Yeshua with knowledge of alternate versions of the universe, and the scene of great tragedy) which stirs our soul, but other than those, we are demanded of a tireless mind to interpret or relate the meaning. What wanted to be a poignant conflict teeters dangerously over the edge, threatening to transcend into a tedious chore.


Although the philosophical debates aren’t deep, Garcia has written some good one-liners: “Action over words, otherwise silence”; “Failure is its own punishment”; “A lie hurts the person who tells it”. Emmanuel Lubezki’s wide-open cinematography does help a lot to stave off the tediousness. Garcia and Lubezki have done a wonderful job of framing Yeshua as one tiny blip in a vast universe. The camera movements aren’t as transcendent as in the spiritual journeys of Malick’s works, but still it hovers as a perfect stand-in to elegantly follow Yeshua’s turbulent inner state. Apart from the slightly dubious Scottish accent, Ewan MacGregor was convincing as the doubt-filled Yeshua and pleasurably impish as the tempting ‘Lucifer’. The ending I felt was frustratingly ambiguous. It makes us ask how the answer to the family’s conflicts impacts Yeshua’s destiny and perspective. Did the noble, divine being’s inner conflicts derive any resolutions by witnessing the struggles of the family? It remains unnecessarily elusive (the final shot of crucifixion was well shot, but it also felt like a formal ending, straying away from addressing the profound layers).

Due to its emotional bluntness, “Last Days in the Desert” (98 minutes) doesn’t quite transcend to be the best take on Jesus’ human nature and his temptations. However, viewers with patience to take in an introspective narrative could discover some thoughtful nuggets.

at August 31, 2016
Email ThisBlogThis!Share to TwitterShare to FacebookShare to Pinterest
Labels: Existential Movies