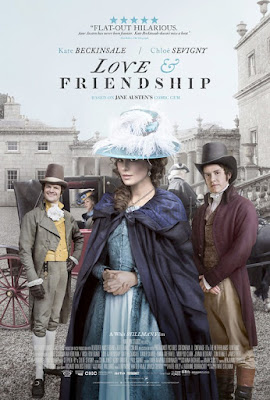 American author and film-maker Whit Stillman in the 1990’s made three films – “Metropolitan”, “Barcelona”, and “The Last Days of Disco” [Criterion released them as ‘A Whit Stillman Trilogy'] – about erudite upper class youngsters (the 1 percenters), starving for love and caught in between the transitional phase of social changes. But, these aren’t melancholic films as the astute observations of characters (and their tireless sarcasm) make it a wonderful comedy of manners. Stillman’s focus on etiquette and witty conversation from his feature-debut has made critics to draw delightful comparisons to Jane Austen. With his fifth film “Love & Friendship” (2016), he has chosen to adapt Austen’s lesser known work (the novella called ‘Lady Susan’). The director’s acute perception to look beyond the surface gentility into the social warfare, waged by powerless woman, in fact makes this film one of the best works to scale the depths of Austen’s writing. “Love & Friendship” is one of the best social satires on the hermetically sealed 18th century upper class Britain.

Stillman’s film is not a revisionist work so as to engage the attention of those who hate costume dramas. The rapid dialogue delivery (the dense, witty nature of the dialogues made me to watch it second time) plus the distant and ironic style may not be preferred by average movie-watching audience. Nevertheless, those with patient, observant eye could immensely enjoy the way ‘Lady Susan’ elegantly moves through the labyrinthine class rules of her time. Lady Susan Vernon (Kate Beckinsale) is what the 1790’s British woman whispered as the ‘very accomplished flirt’. She has perfected her skills in wreaking havoc upon families and also developed an indifference to remain oblivious of the mayhem she had caused. She has been recently widowed and forced to bank on the kindness of men in her social circle. But, she’s a marvelous manipulator whose sweet words would change any detractor. She often uses the word ‘but’ in conversations to easily convince others of her contrasting ideas. In short, Lady Susan adds great depth to the word ‘charming’, which we would otherwise consider as a very simple word. When the film begins, Lady Susan head bowed down gets into a coach to go away from Langford, in the wake of a scandal with a married man, Lord Manwaring. Now, Susan is depends on her in-laws hospitality at Churchill. 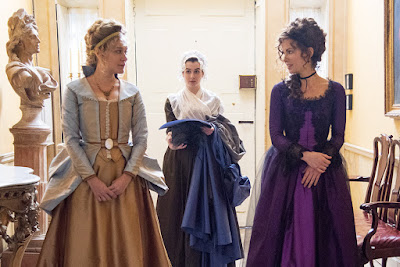 The affability of her ‘obliging’ brother-in law Charles Vernon (Justin Edwards) is the target. The sister-in-law Catherine (Emma Greenwell) is well aware of Susan’s bewitching ways to always stay alert. But she is horrified, when her handsome, young brother Reginald DeCourcy (Xavier Samuel) – the only heir of DeCourcy – empathizes for Susan and slowly falls prey to her flirtation. The cajoling moves Lady Susan makes on Reginald are pretty much like watching a chess game as she finds every loophole to bruise Reginald’s pride (“there’s a certain pleasure in making a person predetermined to dislike instead acknowledging one’s superiority” says Susan to her impoverished friend). Susan’s elaborate plan runs into trouble when her young daughter Frederica (Moryfdd Clark) runs away from school and opposes the idea of marrying Sir James Martin (Tom Bennett). The intelligent girl is against the marriage of convenience, but as Susan explains “Dear, our present comfortable state is at the most precarious sort. We don’t live. We visit”. A little conversation with Sir James, of course, makes us understand Frederica’s fear for marriage. Sir James Martin’ clueless nature is surpassed only by his ability to make doltish comments to ruin the conversations. Frederica is clearly taken in by Reginald’s looks and wisdom. In one of her many sharply comical contentions, Susan asks “How many suitors of great wisdom could a young woman expect to find these days? None. And, I confess, I ask myself is such a quality even desirable in a husband?” The only soul with whom Susan genuinely shares her inner feelings and devious designs is the friend Alicia Johnson (Chloe Sevigny). Alicia’s old husband (Stephen Fry) is the only sensible man, disapproving the methods of his wife’s bosom friend. Susan often laments about Alicia’s choice for a husband, blaming the gout’s failure to send him to a permanent resting place. 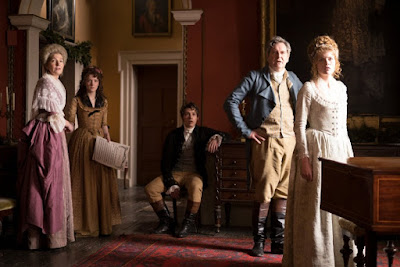 “Lady Susan” was an earlier work of Jane Austen (unpublished during the author’s lifetime), which is different from Austen’s principled characters in her accomplished works. This is a wonderful tale of ambition and power among women, who were at the mercy of class rules designed by men. Susan knows that the mere affection of a man wouldn’t keep her forever in the material comforts. So, she subtly uses the limits placed upon to her own ends. Everyone stumbles in front of Susan’s reasoning and observation of inconsistencies. Even the young woman skeptical of the idea of marriage, Frederica, relegates to the background, whom would otherwise be the protagonist in a traditional Austen novel. But, Lady Susan is not just a distinct creation in Austen’s universe; she is one of the unique female characters, set in that period (18th century Britain). Only after her schemes get the relevant results, we know that she was scheming (the only thing that gives an idea about Susan’s plans are her costumes – she starts from stark black mourning dress to end with vivacious red dress) While women’s desire for power and ambition is often shown as morally reprehensible, Lady Susan isn’t punished by the storyteller for being immoral. In fact, director Stillman keeps her at a distance and make us feel the truth in her words [“I have noticed where there’s a disposition to dislike, a pretext will soon be found”] that gradually we can’t stop admiring the ‘genius’ behind those cunning ideas. And, Kate Beckinsale after doing a lot of tiring and insipid roles gives one of her most deliciously best performance. With a little feeble smile and slight tilt of head, she punches in the (figurative) daggers to change one’s mind. At first, Beckinsale makes Susan a cold lady with an unwavering countenance. But, slowly through comically vicious nature (her amazing delivery of the epigrams made me pause the film a lot of times) she becomes so engaging and even heroic. 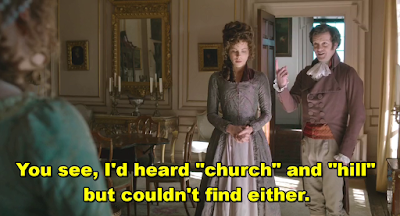 Although many of the greatest lines are said to be taken from the text, writer/director Stillman includes many of his own, delicious words. He adds enjoyable campy introductions to the handful of characters [Lord Manwaring is referred as ‘A divinely handsome young man’, while Sir James Martin comes with a title ‘A bit of a rattle’] which actually works in favor for the film’s wickedly droll tone. Stillman’s works are not much known for visual designs, although his efficiently assembled filming of the conversation (cinematography by Richard Van Oosterhout) and unfussy camera movements in this film serves the basic functionality. It’s also good to see that Stillman doesn’t linger on pastoral landscape to keep his attention only on the ongoing social battle of Susan to gain strength. Lady Susan’s character might have been designed in the most perfect way to eliminate any possibility of a worthy adversary, but the actors playing the restless, swindled, and cajoled characters turn in a brilliant performance to overlook such flaws. Tom Bennett scene-stealing presence as Sir James could be one of the funniest characters in costume dramas.

While Jane Austen’s works are being used as launch-pad for literary spin-offs, Whit Stillman in “Love & Friendship” (93 minutes) does something totally fresh so as to beautifully re-orient the beloved author’s timeless themes. For those on the lookout for a smartest costume drama, this is a must watch.