River [2015] – An Indie Chase Movie with some Interesting Layers 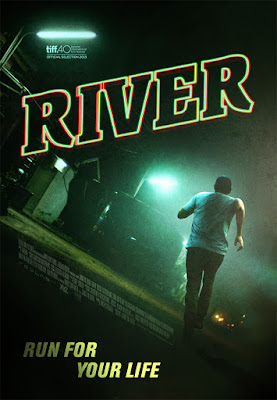 Like Harrison Ford’s Dr. Richard Kimble in the taut chase thriller “Fugitive”, Rossif Sutherland’s Dr. John Lake is also on the run from the Royal Lao Police in Jamie Dagg’s debut feature “River” (2015). Of course, there’s couple of differences between both the films: protagonist in “River” has actually committed the crime he is accused of; and director Dagg has shot his project on a shoestring budget, diffusing a realistic ambivalence. American John Lake is a do-gooder and is afflicted like all the souls who desired to do be good. He works for a NGO that runs a makeshift hospital in Vientiane, capital city of Laos. In the initial scenes, we see several severely wounded people (from an accident) are brought to clinic. In the operating table, Dr. John fails to revive a patient. He ignores his supervisor Stephanie’s (Sara Botsford) order to save other patients waiting to be tended. He is like us: a person who is trained to react or resolve the trouble that’s before them. Like us, he doesn’t know that in a place of rundown hospitals, you got to quickly move on to save other unknowns and think of what lies beyond your limited vision.

The sweat and anxiety of John Lake also indicates us that he has been over-worked and totally stressed out. Stephanie after the episode at the operating table advises him to take a vacation to recuperate. John decides to head for a small island town in South Laos. He takes up a cabin and relaxes by enjoying the sunset and swimming in the beautiful river. Being a good-natured guy, John quickly befriends the local bar-owner and spends the night drinking. He also notices two Australian tourists, sitting with couple of local girls, who are too drunk to stay awake. One of the girls clearly looks underage and at one point, John walks over to the Australians and advises them to not pour more drinks for the girls. There are no altercations, as the drunk Australians and girls go away, disappear into the darkness of streets. Few minutes later, John finds the local girl lying unconscious, near the shore, sexually assaulted by the Australian (Aidan Gillett) standing beside her. 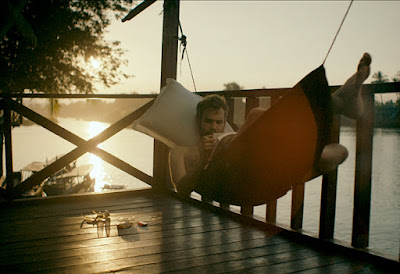 Chaos ensues and John lands some fierce blows into the Australian’s face after getting beaten up first. The worse thing is when he awakens the girl, she flinches and thinks he’s the one who assaulted her. She runs away and John finds that the Australian is not breathing. While taking a anxiety-filled shower in the hotel room, John recalls that he has lost his wallet in the crime scene. He distrusts Laos’ authorities, thinking that he will be declared guilty before explaining or proving what happened the previous night. The hiding and running away is also not easy as the authorities have already commenced their search for him (the identity of the Australian turns the search a highest priority). The intensity of the situation only increases as John Lake moves with a relentless energy.

“River” is neither a highly entertaining chase movie nor the best indie film of the year. But, it works. Why? Two reasons: the big, emotive leading man Rossif Sutherland; and Dagg’s immediacy of the narrative which gradually brings to the light the complex emotional issues. The chase vignettes expects viewer to withhold some suspension of disbelief (similar to Hollywood chase films) to remain engaged. Beyond the contrived chase elements, the most positive aspect of the film is its visual realism. Shot almost under natural lights and outdoors, Dagg has good eye for detailing the country landscapes and its inhabitants. Cinematographer Adam Marsen and director Dagg through the tight shots of John and his desolate surroundings are able to extract enough fear and tension from the sparse plot. Apart from few jerky camera movements (which makes me feel nauseous), the visual compositions, for the most part, perfectly closes in on the subject’s anxiety and also allows enough room for the viewers to observe (and judge or relate) his actions. Dagg also doesn’t show his protagonist to be the smart hero. In fact, John makes more bad decisions than good ones. I also liked the frantic running in the ending sequence, in search for truth and that wonderfully stitched up shots, showcasing the mundane activities, inside the railway station. A train is being washed and the entire surrounding looks cleanliest (compared to all other outdoor shots we witnessed on-screen). Is it intimating that Dr. John is gonna come clean? Whatever it notifies, there was a sense of poetic calm in those shots; it conveyed a little sublime feeling amidst all the frenetic chases. 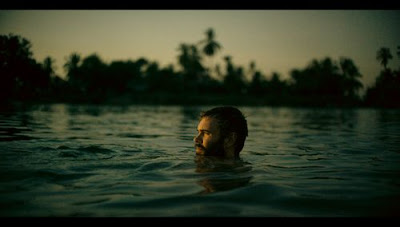 “River” could be seen as a de-construction on Hollywood’s favorite ‘white messiah’ theme. Dr. John is trying to what’s right, while also enjoys the privilege of being ‘white American’ in a country, torn by decades of colonialism and civil war. He does the right thing by confronting the Australian, preying upon the local girl. But, that leads to the loss of his status and privilege. He is being hunted down and now he does whatever that requires to survive. Hollywood films generally hide the lingering prejudices of a ‘white messiah’ to elevate his savior status. In “River”, Dagg repeatedly brings John to confront his own, hidden prejudices about the local people. He distrusts the boatman, government authorities, couple of good guys (with hardened looks) riding in the car. He also discovers that people he saw as friends aren’t quiet what he expected them to be. The hospital truck driver is portrayed with a fuzzy morality (from his perspective, he is doing a greater good); not as a typical brown-skinned disciple of a ‘white messiah’. Canadian actor Sutherland’s (son of the legendary actor Donald Sutherland) physicality and angst-ridden face well serves the character. Despite the character’s careless and bad decisions, he makes us remain empathetic about his plight.

“River” (95 minutes) has a stifling atmosphere, gritty tone and an engaging central performance to sustain the dramatic momentum. It is not a superior indie thriller like Saulnier’s “Blue Ruin”, but still worth watching for its profound emotional undercurrents.