Continental, a Film without Guns [2007] – A Nuanced Study of Human Despair 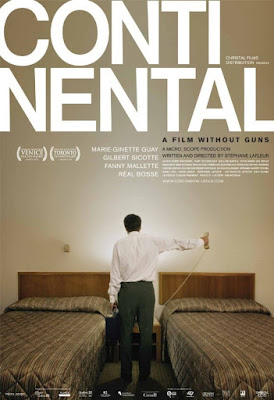 Canadian film-maker Stephane Lafleur presents some kind of cautionary message to viewers seeking entertainment through his playful title “Continental, a Film without Guns” (aka ‘Continental, un film sans fusil’, 2007). There are no guilty pleasures waiting to be found here; only characters wincing with existential angst. May be by insisting on the absence of guns, the director is trying to say that he isn’t viewing his characters through the narrow scope as ‘targets’. The title also conveys what the movie is all about, although it demands knowledge about Quebec’s singles’ dance clubs. An article written by Patricia Bailey in ‘this.org’ (on Canadian New Wave film-makers) conveys information about the American dance tune ‘The Continental Walk’ written by blues singer Hank Ballard. The tune that’s famous in Quebec’s dance circuits requires dancers, without touching their partner, to move smoothly across the floor with their backs rigid. They move in sync, now and then jumping together. This dance provides an entry point to understand the four characters in the film and their lives. Like the lonely dancers moving in sync, the lonely people cross each other's paths without touching – physically or metaphorically – each other.

Montreal writer, director Stephane Lafleur (also an editor who won an award for his work in “Monsieur Lazhar”) is considered to be part of ‘Quebec New Wave’, which comprises of young film-makers weaving tales dealing with modern life’s isolation and disquiet. The film-makers, however, deny such collective labels for their personalist cinema. Critics opposing such labels point out that these films’ melancholia and dead-pan comedy are derived from the minimalist, contemplative frameworks of distinctive film-makers like Roy Andersson, Aki Kaurismaki, Tsai Ming-liang, etc. However, the themes of social isolation and sexual frustration explored in the mordantly funny Canadian movies aren’t just a plain imitation. They are firmly placed in their suburban culture, waddling through the empty North American landscapes. Lafleur’s debut feature-film “Continental, a Film without Guns” is about lonely people desperately trying to connect, but couldn’t. They want to be aroused, touched –at least on a emotional level– although embarrassment and emptiness are the only things they feel. The film opens and ends with a person’s disappearance, which is a beautiful moment of magical realism that reminds us of Haruki Murakami’s stories or Andersson’s impeccably staged episodes. 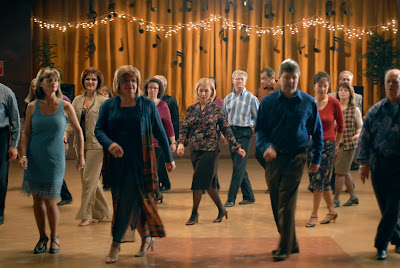 A fifty-something businessman is seen traveling on a bus with a nonchalant look. The bus is moving through darkened streets. He fitfully sleeps and wakes up to find that the bus has halted in the middle of a remote forest. He gets off the road, piercingly gazes at the dark woods and slowly walks into the enshrouding darkness. Few days later, his wife Lucette’s (Mari-Ginette Guay) complaint brings the policemen to her house, asking routine questions (on whether he had any affairs or such) and ensures he will safely return (“This is what a man does when he needs a change” tells the policeman). But she is dropped into a limbo, unsure of what to do next. She receives birthday card and drab flowers from her husband’s office staff (someone has messed it up with the ‘condolence card’). Life has grinded to a sudden halt or her husband’s absence makes Lucette comprehend her inactive existence. Inactivity is what plagues other residents of the city – Marcel (Gilbert Sicotte), Chantal (Fanny Mallette), and Louis Girard (Real Bosse). Marcel is the owner of a second-hand store and a gambling addict, seeking money for his expensive dental surgery. Louis Girard is a young dad who is in the city for insurance salesman job. He stays in a hotel and calls his wife, who doubts whether he has brought a woman to his room (may be he has a troubling past). Chantal, in her early 30’s, works as the hotel’s desk clerk, whose loneliness is so distressing that she leaves voice messages to her house telephone. All of them attempt to dispel this pervading existential gloom, to break out of this suburban trapdoor of a life. Their attempts are vaguely comical, but also relatable.


Lafleur, in his directorial debut, shows consistency in crafting detached visual style. He often pins his players amidst huge buildings or vast, drab landscapes to comment on the similarity between the bland surroundings and vacant emotions. Viewing characters’ actions from a fare distance and the unchanged camera angles brings to mind the minimalist frames of Aki Kaurismaki. The uniformly sustained aesthetic action doesn’t take a short cut to solve out mysteries or include insipid moralist values or thrust in a meaning. Although Lafleur’s ‘show-don’t-tell’ approach might frustrate many viewers, it is devoid of heavy-handedness that plagues movies exploring such themes. The little experiments the characters are engaged in to cast off the loneliness reminded me of Tsai Ming-liang’s films. The Taiwanese auteur’s eponymous character Hsiao-Kang often involves himself in bizarre rituals to fend off the urban alienation. In Tsai’s movies sexual frustration is viewed as one of the reasons for alienated feeling. However, the attempt to purge sexual frustrations would often bring more embarrassment & failure for the people. In, “Continental, a Film without Guns” Louis takes up the offer of a middle-aged couple to watch them have sex, while Chantal goes to party, recommended by a friend, to meet up a man of her ‘type’. Taking up the idea, of course, brings them distress. However, both Tsai and Lafleur possess the eye to turn these personal experiments anti-sensational. Rather than getting revolted or laughing at their actions to ‘connect’, we sort of empathize for them. At the base of all this behavior lies the lack of empathy and the utter failure to connect or understand each other. Even in the film’s familial setup, doubt ousts chances of love. So, sex as a form of cure isn’t definitely helping the loosely connected individuals. 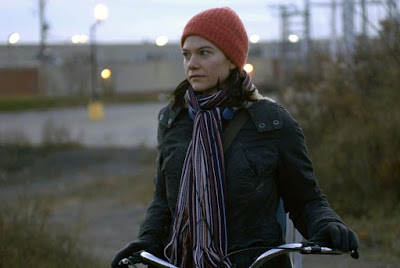 The uncaring nature of world is revealed to be the primary reason for this quotidian human existence. The wife of the missing person is left to put up ‘missing’ posters as if she has lost a dog. And, the repeated shots of ignored, withered, rain-soaked shots of the ‘missing’ poster stand as the symbol for our heedless existence. The script never provides any clear-cut, background details about the characters or what ails them. But, Lafleur is so elegant in populating the frames with small details that we can interpret upon their turbulent past. We don’t hear the voice of Louis Girard’s wife over the telephone, but the man’s promiscuous behavior in the past is subtly addressed. The most affecting of the details are the ones provided to dissect Chantal’s past. The voice messages, the bicycle attached with a child seat speaks of a tragic past. Nevertheless, Lafleur’s characters aren’t totally lost in the void. They possess some hope, a desire to break out of the drudgery. Those who have often felt loneliness even while standing amidst the participants of a loud party could relate with this desire and hope. In one of the film’s most touching scene, we see Chantal searching through the bin to find phone number printed on the box of popcorn. She calls the popcorn company and leaves a long message, telling how much she enjoyed their product. She recognizes some random supermarket product with the hope that someone would recognize her existence. A sequence that made me laugh at first and on second thought made me feel sad. For some, such a fleeting recognition or small questions of ‘how are you?’ is enough to break out of the depressing spell. And so, Lafleur advocates for hope (the red color balloon flying into Louis’ face confirms that). Of course, we don’t know whether the characters will live happily ever after, but they will freely breathe for now, standing their ground for that next wave of existential discomforts.

“Continental, a Film without Guns” (104 minutes) is a film without a plot or three-act structure. It just casts an empathetic look at the uncomfortable, monotonous existence of four urban individuals. What makes this often explored theme, an unparalleled experience is director Lafleur’s nuanced style. With just three movies to his name (“Familiar Grounds”, “You’re Sleeping Nicole”) Lafleur is another Canadian film-making talent to watch out.

Continental, a Film Without Guns -- IMDb
at November 16, 2016
Email ThisBlogThis!Share to TwitterShare to FacebookShare to Pinterest
Labels: Existential Movies