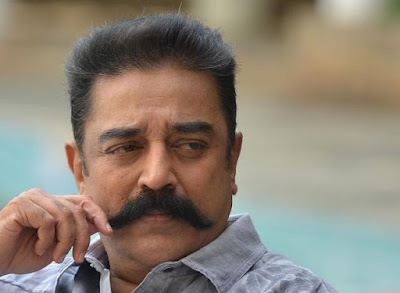 I think Kamal Haasan is one of the few cinema personalities who showed me that cinema isn’t just an elementary tool to produce hero-centric movies for the masses. Yes, there were other important Tamil film-makers (during Rajini and Kamal era) like K. Balachander, Bharatiraja, Mahendran, Mani Ratnam, and Balu Mahendra, who efficiently circumvented the ‘masala’ mode cinema. But, the movies Kamal Haasan involved himself from the late 1980s to early 2000s appeals to me a lot. Kamal Haasan had been a typical romantic hero and later tried his hands in being a mass entertainer. Despite such bland, vainglorious efforts, Kamal had the guts to take risks. From using ‘blue mat’ (in “Vikram”) to avid editing or Redone camera to the latest auro-3D, Kamal Haasan has been a pioneer in introducing new technologies in Tamil/Indian cinema. Apart from the technical innovations, Kamal Haasan has penned some sensible scripts at the peak of his career. He delved into subjects that were taboo in the mainstream Indian cinema. And, it would be futile to verbalize his marvelous performance range.

There have been many criticisms against Kamal Haasan, from his personal, political views to his choice of movies. And, some of those criticisms are valid. However, his contribution to Tamil & Indian cinema could easily dwarf his flaws. My late grandfather, who was a big Kamal fan, once said to me that the fascination in (repeatedly) watching Kamal Haasan on-screen is equivalent to the fascination a child gets when seeing a train or a natural falls for the first time (at least it was for him and I should thank him for making me watch many of Kamal’s movies). Now, I’d like to put forth my sixteen favorite Kamal Haasan movies:

Bharathiraja’s classic melodrama was one of the trendsetters in Tamil cinema. Kamal Haasan played the role of a young, naïve village guy named ‘Chappani’, which couldn’t have been done to perfection by any other actor. As a leading young hero of the time, he was courageous enough to take a role that didn’t have a shred of feigned heroism. Of course, the other biggest plus of this film is Rajinikanth’s majestic performance as the villain. 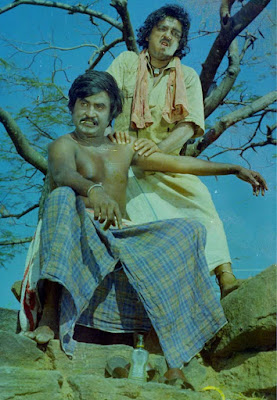 The poetic beauty of director Balu Mahendra’s frames and the on-screen chemistry between Kamal and Sri Devi makes this film an unforgettable one. It had a placid narrative, humanistic performances and a tear-jerking climax. There are few films where Kamal’s performance faced a tough on-screen competition. For the most part, Sri Devi owns this movie until that ending. I think “Moondram Pirai” was one of my earliest memories of uncontrollably crying after watching a movie.

In Mr. K. Vishwananth’s tale of a struggling, highly talented classical dancer Bala Krishna is filled with lyrical beauty. The Telugu title ‘Sagara Sangamam’ refers to confluence of people & destinies intertwined with each other. Director Vishwanth created an everlasting impression by his strong union with Kamal Haasan for this film. There’s a scene when Kamal’s unsuccessful, alcoholic, ageing dancer character storms the newspaper office and showcases his talent in different dance art forms with panache (to answer a young dancer’s insult). Who could forget the rain song, where he dances atop a well? I have seen this movie time and again and it fascinates me each time.

This gangster epic marks the union of three important personalities in Tamil cinema – Kamal, Mani Ratnam and Illayaraja. It is the typical story of a rebellious, downtrodden young guy who becomes a savior for other oppressed people. But, unlike other Indian gangster films, there were not much larger-than-life portrayals. The nuance Kamal Haasan brings to the role of Velu Naicker is up there with the performance of Brando as the head of Corleone family. The bafflement the character goes through before learning about his son’s death and the scene where he meets his little grandson creates lump in our throat through each viewing. 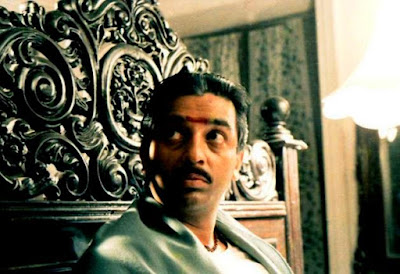 Singeetham Srinivas Rao’s landmark silent comedy tells the story of an unemployed youth who gets entwined in follies and greed before learning his lesson. Kamal was the rightful choice for protagonist whose subtle, comedic body language is yet again a thing to marvel. The narrative was also held together by excellent symbolism and metaphors.

This film had a very simple story of twin brothers separated at birth and settle old scores as grown-ups. The only difference is that one of the twin brothers is a dwarf, who works as a circus clown. Kamal’s transformation into a dwarf was one of the most talked about subjects in Indian cinema. And, he didn’t use the role as a mere gimmick. He brilliantly depicted the emotions and feelings of a person who is endlessly ridiculed for his physicality. He wears a clown-face at the end of wonderful song sequence and is able to pass off inner pain to make us cry. “Apoorva Sagodharargal” was one of the first successes for Kamal’s off-screen involvement (in script & technical side and Crazy Mohan’s unforgettable dialogues were the biggest plus).

From a dwarf, Kamal went on to play quadruplets in this another Singeetham Srinivasa Rao classic. I have seen this film for countless number of times, but still there’s not a single thing in the script that could be called boring. On the performance and execution scale, it is up there with renowned classic comedy/dramas of Billy Wilder and Mel Brooks’ “The Producers”. 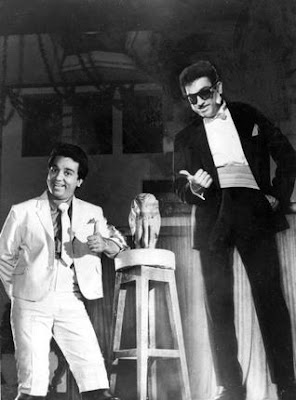 “Guna” is yet another example of how Kamal Haasan holds a movie, even if the plot is very simple (or even banal). The way Kamal embodies the mentally challenged character and the way the narrative is executed makes all the difference. Darkening the skin tone & playing a crazy personality have been done by many actors, before and after “Guna”. But, only Kamal Haasan was able to touch the humanistic core of the distinct character. There’s a marvelous (opening) scene at the asylum, when Guna explains (to a doctor) why he needs to change his destiny, recalling his gruesome past. From the technical and performance front, it was one of the best scenes in Tamil cinema (Kamal said that the film’s tracking shots were inspired from the films of Max Ophuls).

If we list out ten best scripts in Tamil cinema, it would be a crime to leave out ‘Thevar Magan’. While Kamal wrote some of the very best dialogues for this film, the actor Kamal for the entire first-half played kind of second fiddle to legendary actor Sivaji Ganesan’s patriarch character. The film has recently received ill reputation of upholding caste pride, although the film’s core message was against caste-based feuds. May be the message wasn’t profound enough. But, it wasn’t as insipid (or a careless depiction) as the recent commercial films, which is hellbent on fictionalizing the caste pride.

Critics in the Tamil magazines, back then when this film was released, wrote that it would make hard-hearted adult men cry loud in the theaters. It left an everlasting impression on me when I first caught this film on TV in the early 2000s. Written by Kamal Haasan, “Mahanadhi” is the story of an innocent, single father who faces endless miseries in the hands of crooked businessmen & politicians. His helplessness is heightened by the uncaring society. Kamal once again fills his character Krishna with sublime emotions which puts the viewers in his place. The scene when he searches for his daughter in a brothel and the scene he breaks down to cry out his powerlessness bring tears to my eyes, even just thinking about it. It was one of the darkest films ever made in Indian cinema. 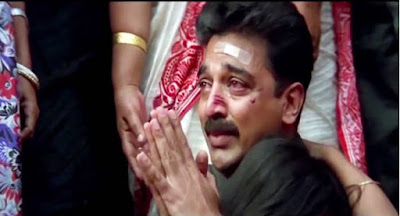 In this disturbing tale of terrorism (remake of “Droh Kaal”) played the role of a honest cop pressured to co-operate with a terror group. The screenplay & dialogues had Kamal’s trademark signature. Veteran cameraman PC Sreeman made his directorial debut in this film (the shot where camera focuses on Kamal’s Ray-Ban and on villain Nassan’s reflection, while Kamal utters the dialogue about ‘bravery’ is a classic scene). The actor’s experiments with make-up paid off greatly in this one. The blood-drenched interrogation scene was mind-boggling.

Kamal’s stunning transformation as the 70 year old radical, freedom fighter Senapathy (wearing all the prostheic make-up) and writer Sujatha’s dialogues makes it one of the mainstream masterpieces. I am not a fan of Shankar’s direction, although he did a good job here, not overcooking his style of mainstream elements (the film’s love-triange of sorts is the only boring thing). After brooding over caste-feuds, human trafficking, and terrorism, Kamal was interested in addressing the biggest issue of our nation: corruption. The film took a very realistic look at how impoverished people suffer in the hands of corrupt government officials. And, it coined a contrived solution in the form of vigilantism. Nevertheless, the film works perfectly as a meaningful entertainer, thanks to Kamal’s presence.

Although termed as ‘eye-opening’, ‘thought-provoking’, and ‘flawed masterpiece’, the film where Kamal first officially took the reins of directing was a biggest flop. This historical fiction had the kind of layered script, nuanced performances and treasure trove of historical themes which simply didn’t connect with the Indian viewers. Kamal’s vision to tell history as it what was generated enough controversies. The sumptuous details and references, crafted in “Hey Ram” require at least two viewings. Kamal once said, if ‘Hey Ram!’ was a success he would have concentrated more in direction (and may be there wouldn’t have been the necessity to desperately prove his mettle in movies like “Dashavatharam”). 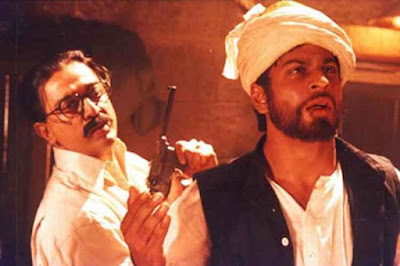 Starting from ‘Hey Ram’ to ‘Virumaandi’, the complex scripts Kamal penned had either disastrous or moderate results in the blockbuster. “Aalavandhan” was a disaster, but it has now gained the status of a cult favorite. The film had an intricate writing which didn’t perfectly turned into visuals or had the emotional quotient to pull in the viewers. The journey of fearless, schizophrenic Nandu was dealt profoundly in the film’s first-half, both in the terms of how Kamal performed as well as wrote the character.

Kamal took on the themes of globalization, religious fatalism, and economic disparity in his excellent version of “Planes, Trains, and Automobiles” (1987). Kamal’s turn as the union activist Nalla Sivam would make the usage of adjective only redundant. In the era of clashing lifestyles, religious, cultural and political views, Kamal’s laudable message is simple enough to not forget: “Love is God”.

Kamal once again returned to South Tamil Nadu with this epic project. He used the ‘Rashomon’ style non-linear narrative to track down the truth behind brutal feudal killings. Kamal used three subtexts in this bloody tale – caste-based violence, fight for resourceful land and a message against capital punishment. The themes didn’t work perfectly and had its flaw. But, as a performer and a director, he once again set benchmarks for Tamil cinema. 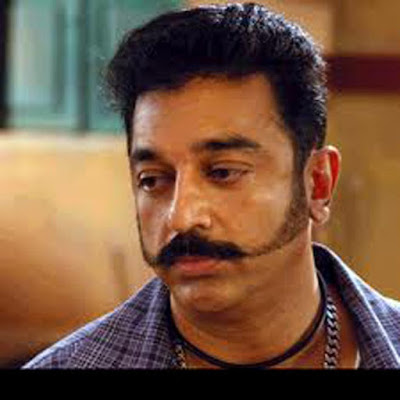 I hope this post has served as a very little window to explore the multi-faceted cinematic personality of Mr. Kamal Haasan. And, there are many other works outside this list (for eg, “Aval Appadithan”, "Varumayin Niram Sigappu", "Swati Muthyam", "Raja Paarvai", “Punnagai Mannan”, “Unnal Mudiyum Thambi”, "Sathya" “Avvai Shanmugi, “Sathi leelavathi”, etc) to experience & understand the great influence he has created in Tamil cinema.

One of my favorites!

Great actor. These days he's becoming a bit of a show-off, but no denying his talent and passion to making movies.

@ Harish, Yes i am also not a fan of Kamal Haasan's works, starting from "Dasavatharam"

Plz read my views on Anbe Sivam in below link,