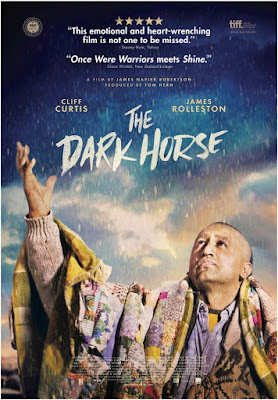 New Zealand film-maker James Napier Robertson’s “The Dark Horse” (2014) tells the story of real-life chess champion Genesis Potini. This Maori chess genius, who suffered from bipolar disorder, taught the game to underprivileged kids, raised among alcoholics, drug abusers and hoodlums. So, apparently it is an underdog/redemption-seeking-mentor story. But, Mr. Robertson’s fine-tuned direction and Cliff Curtis’ majestic method acting stops “The Dark Horse” from being just another inspirational story. The film opens with tall, hulking frame of Genesis Potini, wrapped in bright, multi-colored blanket, walking in the middle of the road through heavy rain. It is a perfect frame which conveys our protagonists’ journey towards salvation. His pate is partially shaved and a smile reveals rake of broken teeth. The man’s face seems to exude painful and beatific look in equal measures. He moves through a chess shop and rattles the pieces placed on a wooden chess board. The people in the shop are alarmed at first, but looking at the way he rapidly moves the pieces (playing both sides and reciting different strategies) with surging excitement eases the little crowd. Before long, a woman softly brings him out of the shop and a couple of bulky guards push him into a hospital van. In this opening scene, the eccentricity and genius of Mr. Genesis is placed alongside the hard reality that afflicts him. This balanced, refined approach continues throughout this brilliant story of mentor-ship.

New Zealand actor Cliff Curtis has played many supporting roles in Hollywood, portraying characters of different ethnicity – Arab, African-American, etc. He has played the despicable Uncle Bully character in “Once Were Warriors”. Cliff is a slim guy and he had gained over 60 pounds to play bulky guy Genesis. He has also stayed in character, both on and off the frame, until the end of shooting. The commitment is incredible. From the moment he enters into the frame, Cliff conveys Gen’s genius and illness with utmost conviction. When the film’s narrative commences, Genesis has spent some years in a mental institution. The authorities are ready to release him, provided he takes his medications and placed under the care of a relative. His only brother Ariki (Wayne Hapi) reluctantly takes him out of the hospital. A brief flashback shows us that Genesis learned chess from Ariki at the age of 10. Their long disunion had strained the relationship. Ariki is now a top leader of brutal Maori biker gang. He wants his teenage son Mana (James Rolleston) to toughen up to be part of the gang. 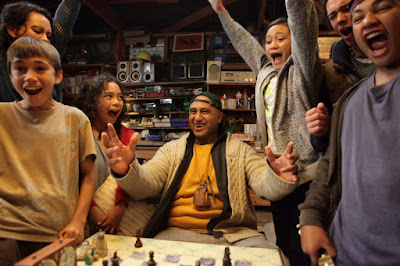 Mana takes interest in chess and his uncle than gang life. Genesis was strongly advised to find a purpose in life; some positivity. The purpose comes in the form of ‘Eastern Knights Chess Club’, which is run by a friend & social worker Noble (Kirk Torrance). The last thing Noble wants for his club of underprivileged kids is a man with no stability. He worries Genesis will build their dreams only to fail them at some crucial point. The kids are a group of charming, unruly oddballs, hailing from environment of poverty and violence. Genesis reckons that he will prepare them for Auckland Junior Chess Championship in six weeks time. He also helps his sensitive nephew Mana to escape from the gang. Problems turn up at every corner and stress levels threatens to derail Genesis, but like the king in a board he is pressed down by the responsibility to bestow stability on his tribe of young warriors, both on and off the board.


James Napier Robertson made his directorial debut with a micro-budget thriller “I’m Not Harry Jensen” (2009). His confidence in writing and astute direction in this film makes him to be talent to watch out for. It is easy to get carried away with a story like this. The sentiment could be over-cooked or the heroic achievements could be overstated. Robertson doesn’t fall into any of those traps. He never over-sells a joyful or sad moment. There are few occasional cliches (for eg, Mana’s act of robbery or Ariki’s arrival to Auckland) but the lives and emotions involved here seem much more complicated than your typical inspirational drama. Mr. Robertson has spent a year with real Genesis, a gentle giant, who is said to have freely talked about his illness as much as showing his prowess. Genesis Potini passed away in 2011 (at the age of 47), while Robertson was working on his script. Although the film shows Genesis helping small bunch of kids, in reality the champion has guided thousands of kids to lead a better life. Robertson recalls that during Genesis’ funeral the hall was overflowing with people. Successful businessmen and lawyers attested that this great man had turned them away from a path to crime. So, in a way the director had the extra pressure to cement Genesis’ legacy through this tale. The riveting end result not only deftly handles the emotions, but also dwells on the broader ramifications of this story. By gaining a pot-belly and through the rocking gait, Cliff is able to mimic real Genesis (as seen in you-tube clips). The performance, however, goes far deeper than a mere impersonation. He flawlessly zeroes-in on the constant conflict between mental frailty and quest to gain inner strength. He offers an unflinching look at the man without ever disrespecting his predicament. Neither Robertson’s script nor Cliff’s acting insinuates about a happy ending or a cure before the end credits. The honesty with which Mr. Genesis was presented & portrayed is the chief strength of this uplifting movie. 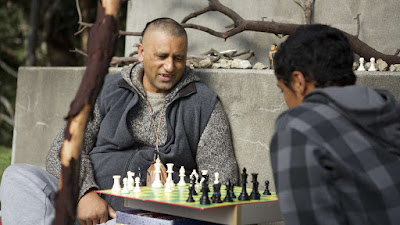 The life of Genesis is basically a story of a man who wins over the unforgiving world and his vulnerability through steadfast inner strength. The narrative could have been more crowd-pleasing if the focus is deviated on kids and their preparation of chess competition or Robertson could have weaved a lesson on poverty among Maori community. The choice to keep the focus only on the difficulties of central character and his conflict with brother Ariki lends a broader scope. The life of gangsters in “The Dark Horse” is filled with boredom. They are just seen sitting around, drinking boisterously laughing for no reason whatsoever. We could see the inherent sadness of this (often glamorized) environment (their idea of masculinity is subtly questioned). Genesis quest to transform the lives of kids (including Mana) sort of reflects his connection with board. He has coordinated all the powerless ‘pawns’ of real life to find something – like a purpose – on and off the chessboard. And, these ‘pawns’ (the kids) have become stronger to protect their ‘king’ (Genesis). The kids’ quest for a purpose and Mr. Genesis’ purpose beautifully blends in. Apart from Cliff Curtis, Hapi turns in endearing performance as Ariki. Hapi was once a gang member, who turned away from the brutal lifestyle when his son was eager to follow the path. The way he emotes in the key final confrontation with Cliff makes us hard to believe that this is Mr. Hapi’s first time before camera. The kids are also not trained actors. And their inability to utter some dialogues and natural smile bring loads of charm.

“The Dark Horse” (120 minutes) is one of the best uplifting drama i have seen in recent times. Although the story line may make you think of it as yet another ‘against the odds’ story, the towering performance from Cliff Curtis and the sensible directorial approach will impart you with an unparalleled movie experience.

The Dark Horse (2014) -- IMDb
at November 24, 2016
Email ThisBlogThis!Share to TwitterShare to FacebookShare to Pinterest
Labels: Based on True Story, Feel Good Movies